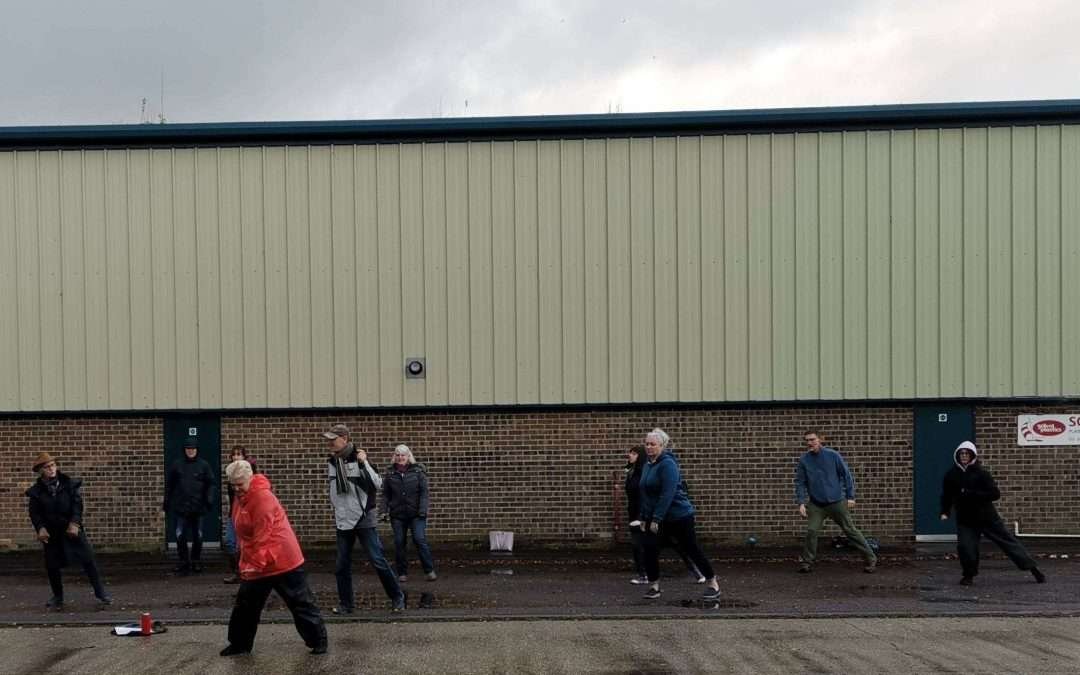 PANTO SPECIAL 2021
The Panto Must Go On

Above: The outdoor social distanced dance rehearsal – in the rain!

When the news hit the headlines back in March 2020 about closing down, all buildings and places where gatherings occurred, the theatre world, both professional and amateur, started wondering where their theatre upkeep funds were going to be coming from. Theatre management up and down the country realised they couldn’t put on any live shows for the foreseeable future and reluctantly closed down their premises. However, there were many theatres that decided to take an alternative route and turned to showing films to limited audiences. Theatre owners and managers knew this venture wouldn’t make a lot of money but at least it kept their patrons interested and the theatre open and in the public eye.

CINEMA
Romsey Amateur Operatic and Dramatic Society (RAODS), like many other amateur theatrical companies, was also busy transforming the auditorium of The Plaza Theatre into a cinema in order to show films to their reduced capacity auditorium. The idea was not a bad one – there were no cast or stage crew to worry about, along with a reduced number of ushers, which meant fewer people in the building, and by careful segregation of the auditorium seating, they managed to cut audience figures down to make sure they kept within the Law. They (obviously) had to close the bars, kiosks and cafeteria to make this viable. Although this project was still bringing in small but much-needed funds, their hope of getting back to live performances seemed to be a long way in the distant future. Many RAODS members were also upset that the lockdown and social distancing was obviously going to mean a break of their proud tradition of performing a pantomime every year since they formed in 1934, with the understandable exception of the war years.

This was when I and Georgette Ellison, the director of the cancelled pantomime came up with the idea of a reduced Covid-friendly pantomime. It had to have a length of one hour, give or take the odd few minutes, because it would prove difficult to have an interval and keep the audience safely distanced. The cast would all wear plain masks, but with a felt mouth that each cast member designed and added themselves.

AUDITIONS
The other difference to our normal shows was that the cast were all invited to join the panto, as there was no way we could hold our normal open auditions due to social distancing restrictions. Georgette’s idea was that we would film the finished show, even if it meant cutaway filming etc. so we needn’t have everyone onstage together. Once the film was finished and edited, we were going to show it to our public on the big screen instead of a live show. The beauty was that the theatre and stage were booked out to the panto for a full three-week period throughout January, which meant we had the same amount of performances, but to a reduced audience.

SCRIPT
Georgette had already decided on Jack and the Beanstalk as the title for the upcoming pantomime, so she reread the script she had planned on using and realised there was no way it was going to work due to the drastic cutting that would be required – plus, of course, we would need the permission of the author which we couldn’t be certain of obtaining, certainly within the time that we had available. We needed to take a fresh look for a script idea. With that in mind, I took my original Jack and the Beanstalk script that I wrote back in 1998 and proceeded to shorten it by removing both the junior and adult choruses, along with the odd character here and there, then Georgette and I got busy rewriting odd passages and speeches, cutting many lines and adding extra humour and dialogue to keep the attention on staying safe during the pandemic. For instance, we changed the name of King Kidneybean to King Boris, who would come on stage at anytime throughout to make sure the cast, and the audience, were wearing their masks and keeping their distance. He always carried his squirty bottle of disinfectant and a cloth with him whenever he was under the spotlights, wiping down different areas as he went. There were a couple of times when two characters were onstage talking, and suddenly King Boris would rush on with a tape measure and measure the distance between them.

TWO METRES!
There is another scene where the principal boy and principal girl rush to each other to hug before going into their song and dance routine. We got over this, by simply getting them to run towards each other from opposite sides of the stage, like in films. I suggested that they did the running in slow motion, then King Boris pops his head round the pros arch and yells: “Two metres!” With this, the two principles swerve to give each other a wide berth as they pass, but carry on running offstage, immediately coming back with two broomsticks each with surgical gloves attached to the ends. They then meet centre stage for their dance using the broom handles as extended arms to keep their distance from each other. We got over the lack of chorus members by the rest of the cast becoming a well-spaced chorus for the dance numbers and the odd village scene.

REHEARSALS
The main problem we faced, was how we could get together in order to rehearse. Georgette came up with the idea of rehearsing via Zoom which seemed to work wonderfully well. We even had a day when Diane Phippen, our choreographer, held a most unusual dance rehearsal. This was achieved by finding a large empty concrete area in the middle of a temporarily unoccupied industrial estate. Everyone was spaced well over two metres apart. Inevitably it began to rain during the afternoon, but through all this, our very wet and freezing cold cast carried on regardless, knowing full well that there was always the possibility that we would have to abandon the show at a later date.

SURVIVING SKIN PART
We thought about Daisy, the poor old cow, and what kind of outfit would we need for her. That’s when Georgette came up with the wonderful idea of still using a two-person costume, but the rear half, wearing the cows back end and tail, and a pair of udders sewn on to her costume, was always at least two metres behind the front end. She would continuously be irritable and miserable like a petulant teenager who didn’t want to be there in the first place, while the front end was always the happy-go-lucky Daisy that one always associates with this particular pantomime. She walked along proudly dragging the rest of her costume behind her. To add to the humour, the large panto cow’s head was also wearing a large face mask.

LOCKDOWN
As we were getting forever closer to January, we realised that it was getting more unlikely that we would be able to perform this on our desired date due to the Covid regulations being bumped up and lockdowns more severe. It was getting more and more obvious that the theatre wouldn’t be allowed to open in time, even for showing films. But not ones to give up easily, we have cleverly come up with plan B which, so far, hasn’t happened yet.

Plan B is to keep going the way we are with a weekly Zoom rehearsal, until the government give the go-ahead for live performances in the theatre again. We are now hoping that we might have the theatre open in time for an Easter panto.

Plan C, if needed, will be a summer panto… but it won’t come to that, will it? 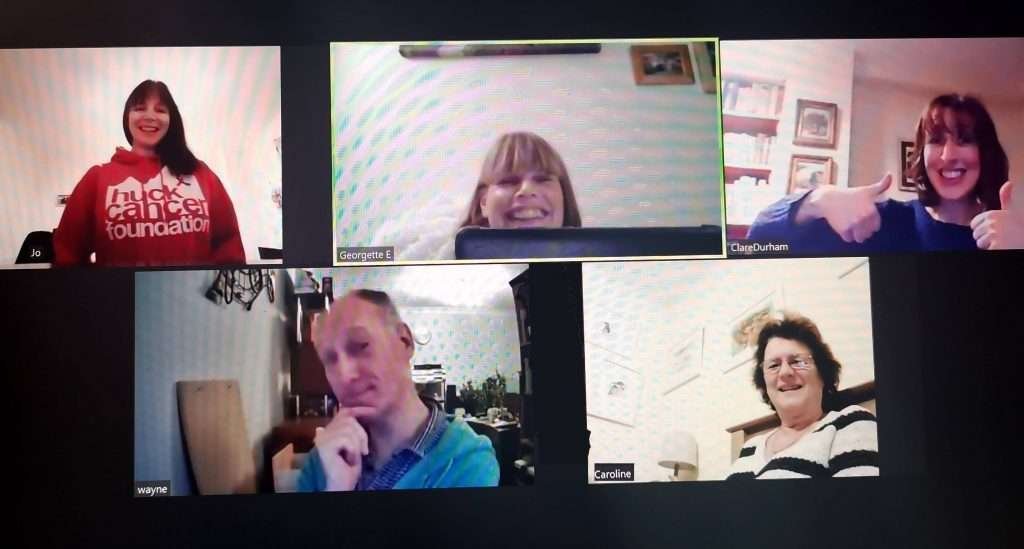