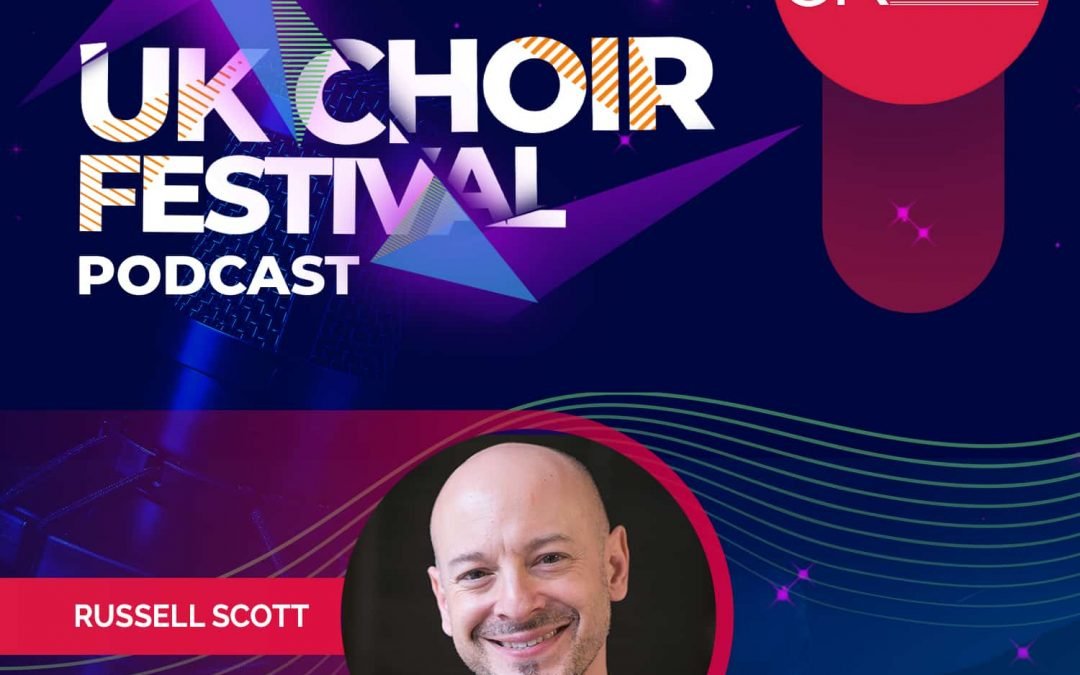 The UK Choir Festival has launched a brand-new podcast.
The podcast is presented by Russell Scott and features news, interviews, comment and discussion on all matters ‘choir’.
Episode 1 includes talk about getting back to choir plus an in-depth interview with co-founder and artistic director, Rachel Staunton of London Youth Choirs.
All episodes are available through service providers including Apple, Spotify, Amazon Music, TuneIn and Deezer – all the usual providers.
Why not take a peek and play the first episode direct from the UK Choir Festival’s website for free at ukchoirfestival.com/ukcf-podcast, where choir directors even have the opportunity of applying to be on the show.
‘RED’ Members also have access to the complete podcast archive via the members’ dashboard.
It would mean a great deal to the UK Choir Festival and it potentially help others choirs by telling them about the podcast.
Visitors are also being asked to leave a review of the new initiative, via the podcast platform.
If you wish to subscribe you can do so and it’s very straight forward.
Founded in 2016, the UK Choir Festival has been hailed as one of the most awe-inspiring choral festivals in the world. The festival is aimed to give opportunity for choirs to learn, develop and perform in a positive and non-competitive environment by some of the best workshop leaders in the UK.
The new podcast features news, discussion, comment and interviews from the choir world and is aimed at both choir members and directors alike.
Whether you are a choir of four or three hundred people, you will love being part of this exciting and dynamic festival, where learning and making great music is at its heart. 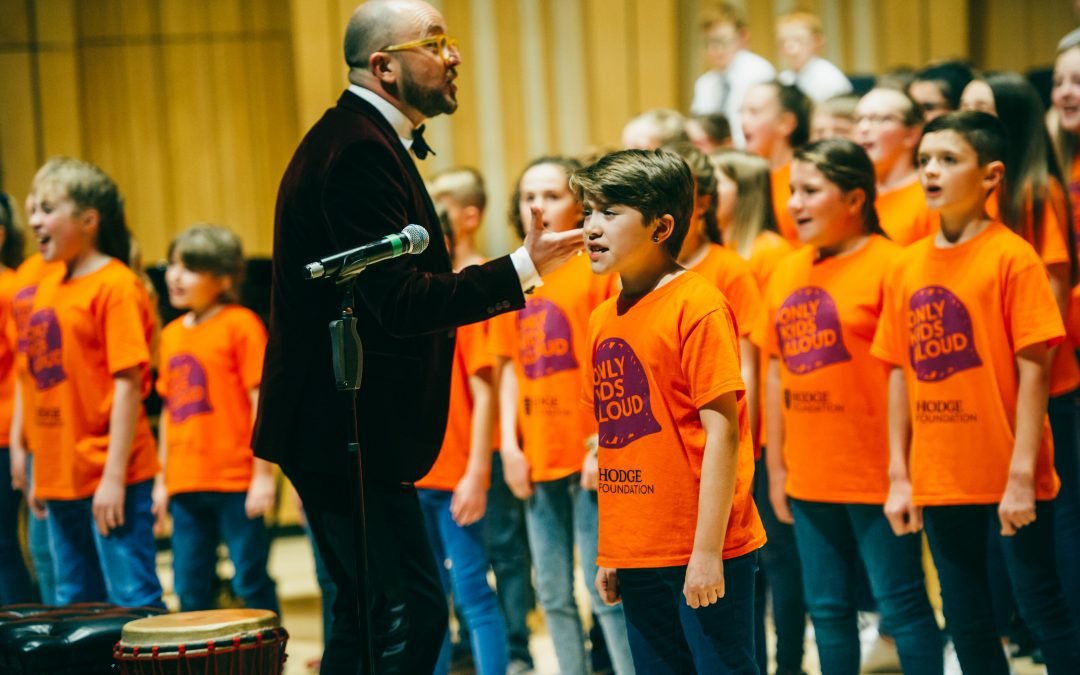 Tim Rhys-Evans MBE will join the college in his new role in April. He is best known as the founder and Artistic Director of The Aloud Charity, which runs Only Boys Aloud and Only Kids Aloud.
He will continue his association by becoming the charity’s patron. He’s also the creator of Only Men Aloud.

An MA graduate, former vocal studies tutor and Fellow of the College, Tim is a renowned musician who regularly works internationally as a choral conductor, vocal specialist, arranger, composer, adjudicator and presenter on TV and radio.

In 2013 he was awarded an MBE for services to music and for charitable services.

“I am absolutely delighted that Tim is taking on this role,” said Helena Gaunt, Principal of Royal Welsh College. “He brings a combination of bold vision, outstanding artistic achievement and an international outlook. He also has a profound understanding of Wales’ musical traditions and a deep commitment to nurturing potential in each and every individual.

“This experience will play particularly strongly into the college’s new, ambitious strategy to develop our work and impact across Wales and to provide transformative experiences for diverse communities. Tim will bring fresh perspectives and inspiring energy to complement our existing expertise and we greatly look forward to working with him.”

Tim said, “I have a long association with the College, and I’m absolutely delighted to be assuming the role of Director of Music. Witnessing the college’s transformation in recent years has been a joy and I’m excited to be playing a part in the next phase of the College’s development.

“Music and the performing arts are so central to us as a nation and I will be committed to ensuring that excellence is at the core of everything we do, enabling us to shine even more brightly on the world stage.”

Menna Richards, Chair of The Aloud Charity and Vice-President of RWCMD added, “The Aloud Charity will be sad to see him go, but his legacy will live on through Only Boys Aloud and Only Kids Aloud.
“Tim’s vision and ambition for Aloud have made a huge difference to the lives of so many young people and we are determined that the charity will continue to change lives. I’m delighted that Tim will be continuing his association with Aloud by becoming the Charity’s Patron and look forward to building on the strong relationship that already exists between Aloud and the College.

“All of us in Aloud wish Tim all the very best as he sets out on his new role.” 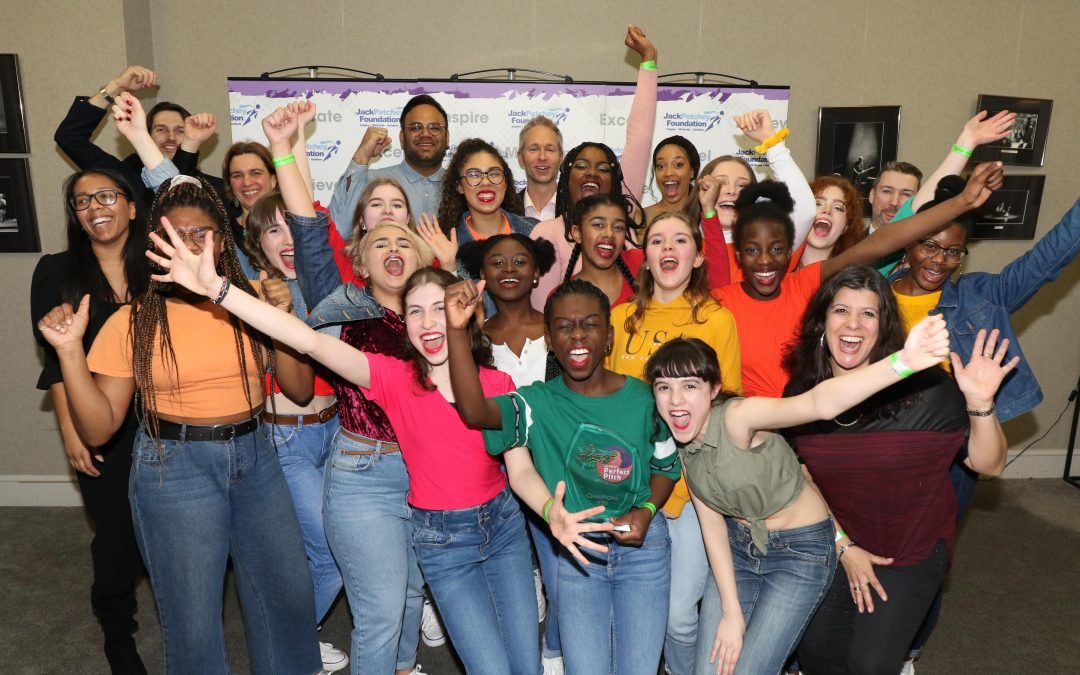 NoteWorthy, youth choir from Wallington High School for Girls, were crowned Jack Petchey’s Perfect Pitch Champions for the second time.
Singing ‘a capella’ style, the troupe, performed at the Grand Final at the world famous Cadogan Hall in March and walked away with part of a £1,000 prize pot. The competition saw young a capella groups from London and Essex perform in front of a packed out theatre as well as an expert judging panel.
Jack Petchey’s Perfect Pitch competition saw twelve groups emerge from regional finals, to take to the stage for the grand final, wowing the audience with their vocals and performance skills. The audience were treated to renditions of The Beatles, Etta James, Dua Lipa, Billie Ellish and more. Performances ranged from a more traditional choir format to incorporating rap, beat boxing, mash-ups and choreography.
NoteWorthy have been together as a complete group of sixteen since July 2019. They were the winners of the first Perfect Pitch competition in 2018 and some of those older members have now left for university so had to be replaced by younger students at Wallington High School for Girls in Sutton. This year they took home a prize of £500.
Noteworthy Director and Head of Music at Wallington High School for Girls, Jennifer Yard said: “The experience at the Jack Petchey Perfect Pitch competition at Cadogan Hall on 1 March was just incredible. The venue was stunning with such great acoustics and great views from all seats. It really was an excellent experience for all of us, working closely as a team and working towards a performance worthy of a grand final. I am extremely proud of NoteWorthy’s professionalism, musicality and ambition and we have all gained an experience that we’ll remember with great fondness for a very long time. I would like to extend my sincere thanks to Jack Petchey and all the team that work so hard to make this such a positive experience for all.”
NoteWorthy member Yimika Osilaja, aged 17, said: “Jack Petchey has always been such a fun experience. We’ve been competing as a group since 2018 and each time we perform on stage it’s so exciting and seeing your hard work pay off is one of the best feelings in the world. I really hope to continue performing in the future!” 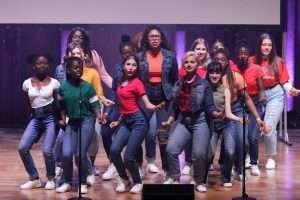 This year’s Runners-Up prize went to Norbury Manor Celeste from Norbury Manor Business and Enterprise College in Croydon. They are an all-girls 11-18 choir and they sing every type of repertoire that choirs can cover. Third prize went to Hapaphonix from Harris Academy Peckham, a Chamber Choir. Second and third place in the competition won £300 and £200 respectively.
Emma Stevens who teaches the choir at Norbury Manor Business and Enterprise College said: “Celeste have been so delighted to take part in the Jack Petchey Perfect Pitch Competition this year. The Grand Final day was such a fantastic experience for us all at the prestigious Cadogan Hall. The event ran like clockwork thanks to the team of organisers and so many of the performances in the evening were incredible. After months of hard work the show really did provide a wonderful end to what has been a brilliant experience all round. We are very proud to be runners-up in our first experience of the competition and are looking forward to taking part again in the future. Thank you Jack Petchey Foundation for such a positive experience.”
Hapaphonix member Yeray Pena, aged 15, said: “I really enjoyed performing at the Jack Petchey Perfect Pitch competition! The standard of all the performers was great and to get third place at the Grand final is amazing! I am proud of Team Hapaphonix!”
Associate Assistant Principal at Harris Academy Peckham, Kerry Rogers added: “What a great event! The whole process was excellently planned and the support we received was excellent. Our students loved performing at Cadogan Hall – what a great opportunity for them!”
Sir Jack Petchey CBE, aged 94, said: “It is right that we should support our youth in this way. It is right that we encourage and nurture them to grow their talents – whatever those talents may be and they have as much fun as possible on the way! How I would love to be able to sing like them! With the confidence they gain from Jack Petchey’s Perfect Pitch I hope they will go on to achieve great things.”