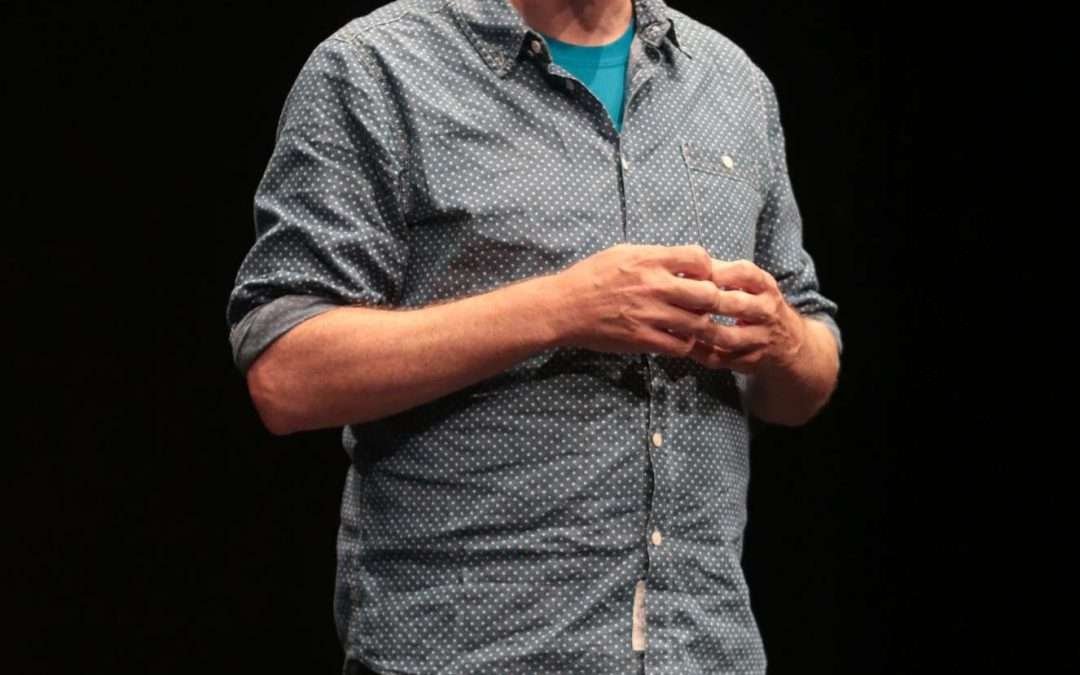 Directing Online in a Weir-d Sort of Way

by Ian Higham. Ian Higham has been a member of Putney Theatre Company for over thirty years. During that time, he has directed more than forty productions, and served as Artistic Director between 2012 and 2015. He is also Sales Manager at Nick Hern Books.

A year ago, when theatres closed, the production I was then working on had just had its tech. We’re still waiting to have our dress rehearsal. But amateur theatres, like their professional counterparts, have proved resilient in the face of a crisis, keeping members active and involved, and raising funds to maintain their venues. Putney Theatre Company – a brilliant amateur company that I’ve worked with for over thirty years now – has spent the past year organising monologues and readings over Zoom, doing outdoor performances, socially distanced live rehearsed readings and even a full production on stage when we could. One of our biggest successes, however, enabling members to act and the theatre to keep connected with our audience, has been in producing licensed one-off performances online. 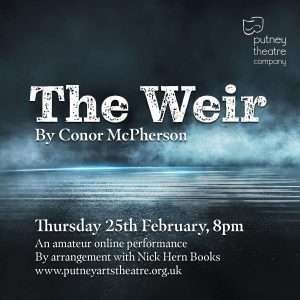 It was our Artistic Director who came up with the idea of producing Conor McPherson’s haunting and emotional play The Weir in this format. The play was one that had been on my to-do list for some time, though I’d always imagined it live on stage. But as we talked it through, it became increasingly obvious that this was a production that really could work online. A single set, five characters and five cracking monologues… it seemed the right play to point a laptop camera at.

One of the great joys of Conor’s writing is the sense of an entire world he creates by bringing together five people in just one room. The play is set in a small bar in rural Ireland – County Leitrim, to be precise – and takes place over the course of one evening. From the get-go I decided that I really didn’t want the production to look like a business Zoom meeting, with five people on screen talking to camera all the time. It seemed obvious that with the characters gathered round a bar, a single camera should focus on each one, capturing everything their character says. As the dialogue develops it becomes quite reactive – it’s a script where characters listen and then respond. So, although I’d lose some of the physical reactions from characters as others were talking, I knew that by essentially using ‘speaker view’ (to slip into Zoom vocab for a moment), I could focus the audience on each actor when necessary. This would give them equal weight and build a sense of intimacy that seemed to me to be inherent in the play, and vitally important to any production. With our own social lives stunted by lockdown, I wanted as much as I could to make the audience feel that they were there in the pub, sharing a drink with Jack, Brendan, Jim, Finbar and Valerie.

Over five weeks, working a few evenings a week and over Sunday afternoons, we began to put the play together. As each character entered the scene, they took their seat at the bar and, so long as each actor – in reality stuck in their own room – knew exactly where everyone else was (to their left or right, across the bar, and so on), they could talk to each other rather than to the camera. For the audience at home, watching on their laptop or TV, this created a sense that they were watching people interacting in the same space. To aid this further, I bought on eBay a job lot of framed Victorian prints that had been destined for a pub, and distributed them to each actor at home. With these up on their walls, the sense of being in one place was subtly enhanced, and the sense of being in Conor’s world was created.

In fact, eBay became the go-to for all our props – and with the actors spread across different locations in London, these all had to be doubled up. If Brendan the barman filled and put down a pit of Guinness, I wanted to be sure that Jack picked up an identical glass. It sounds simple but there is a lot of drinking going on in the play! So we had to put in cues, finding the right point in a character’s line for them to put a glass down and the right point for the other character to pick it up. With over thirty different glasses of Guinness, Harp, Irish whiskey and white wine passing back and forth, it became a highly choreographed alcoholic ballet that took some organisation and brought a whole different skill to directing.

Working online also requires a different skill from the actors. In live theatre, you inhabit a world together that hopefully seems as utterly real and believable to the actor as to the audience. Stuck in a small room in front of a laptop, it’s really difficult to recreate that and connect with the other characters. To help overcome this, I felt it was important that everybody attended as many rehearsals as possible as a company. It’s a big ask over five weeks – especially when a character isn’t even in a scene and people are already in a stressful situation – but working together like this meant that we built a sense of community. Our actors didn’t just come along and do their own thing, which I felt could be a bit of trap in this situation, making it far too easy to drift out when not onscreen. We worked on the principle that though they might not be seen, it was important to the production that each actor worked even harder than usual at fully inhabiting their role at all times. They had to really listen to each other so that they knew exactly what they were thinking, exactly how to react even off-camera and, most importantly, to know exactly how to respond to what was happening in the play when it came to their turn onscreen. Gradually, despite the distance, a real sense of being a company developed, and the friendships and relationships that Conor so brilliantly creates in his writing began to come to life, even over a small screen.

The other fantastic thing about Conor’s work is his ability to write big, gripping, emotional monologues. The Weir is steeped in the Irish tradition of storytelling, and there are five stories told in this play. The first is a tale of the fairy road, the kind of traditional Irish story that outsiders love to hear. The second and third, told as alcohol loosens tongues, are more personal encounters with the supernatural, strange events that are explained away by fever or a flight of fancy. The fourth is a devastating story of the loss of a child and a genuine belief in a supernatural event that cannot be so easily explained. And then, finally, we get a different kind of ghost story: a tale of regret, one that looks to the past and acknowledges a deep sense of loss and yearning, an emotion that comes unexpectedly but that has, it becomes clear, been present throughout the play.

These were the only scenes that we worked on individually with the actors, and it was fascinating to see how working on Zoom one-on-one, without any other distraction, really helped to focus on the writing and dig deep into the reason and meaning of each story. When we then got together it became clear how each of the monologues is a step towards the other, an opening or an allowance for each story to be told as the evening unfolds. We may have been broken up as a group while working on the monologues, but in really focusing on them, and understanding how they are related, we built up to a coming-together of the characters that then flowed through the play and the production – giving it a richness and emotional connection that, I hope, managed to reach beyond the small screen.

Strangely, I’ve rarely been so nervous before a performance as I was before The Weir. While working together it really felt as if we were creating something special, but we were such a small and fragmented group that it was hard to know if the feeling we had tried so hard to create – of being together in one space – would carry through to the audience. In the end, the brilliance of Conor’s writing, the talent of the actors and their belief in the world we created, shone through and for that one night we had a terrific success. The audience reaction was certainly amazing; with many people saying how they felt that they had been in Brendan’s small bar for the evening, and had really connected with the characters and the way they talked to each other so naturally. Better still, it was an evening that not only raised much-needed funds for the theatre, but one that gave members of PTC an opportunity to do what they love.

And that is the main reason I’d recommend doing a play online. It might not be entirely the same as live theatre, but it can be special – and with thought, commitment, and great writing, you can really recreate the thrill of making theatre, building a story and a world on screen to share with an audience until we are all able to get up in front of them again live on stage. 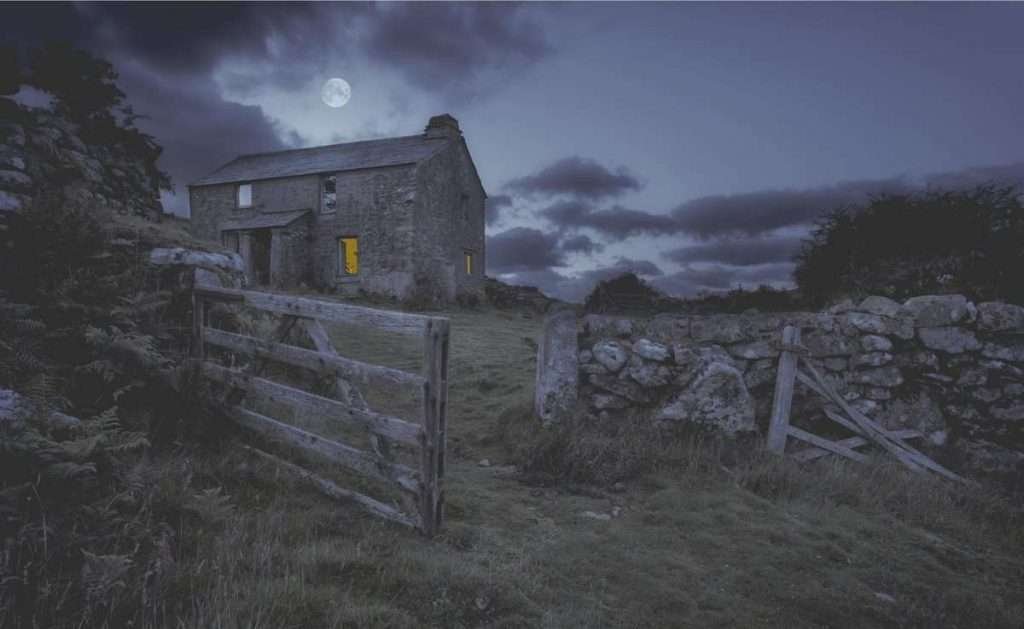