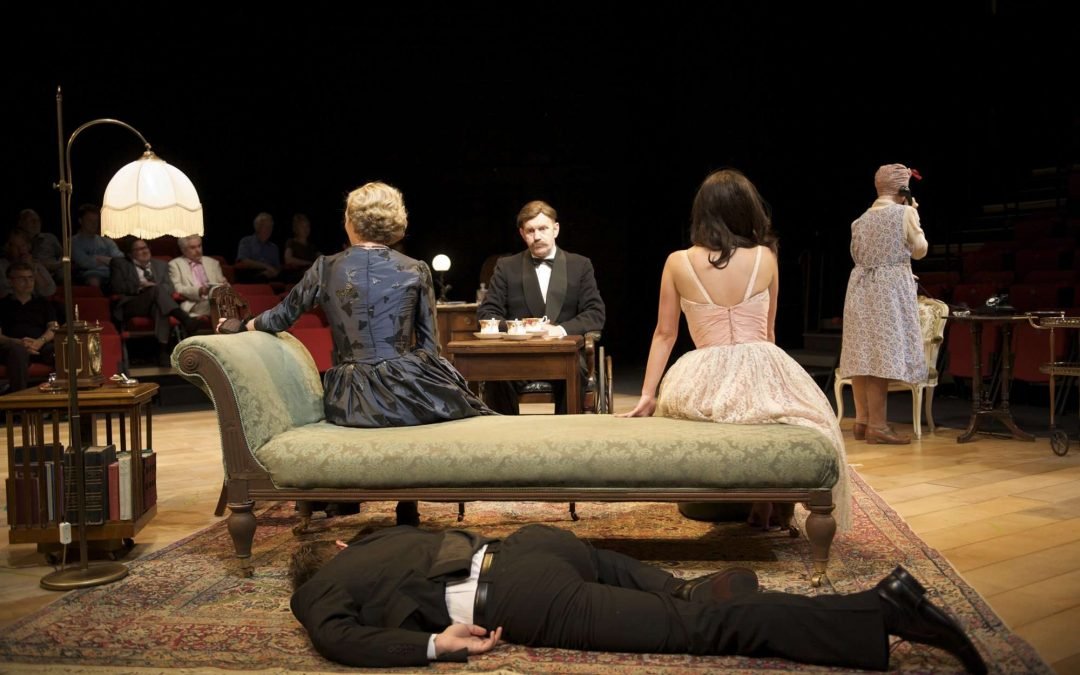 The Art of Corpse Acting

If you’ve never played a dead body onstage then I’m afraid I’m not sure you’ve earned your am-dram stripes yet!

I played one (of course) some years ago in Tom Stoppard’s one-act play, The Real Inspector Hound but there are countless other examples right across the whole theatrical spectrum, such as in Hamlet, King Lear, many Agatha Christie whodunits etc. Plus, of course, I’m not referring to the verb of ‘corpsing’ which involves getting the onstage giggles (that would be another article altogether – and you only need look up ‘Ricky Gervais corpsing’ on YouTube for a myriad of examples).

As part of my own modest timeline, in Stoppard’s murder mystery, my own character entered quite healthily just as the curtain rose only to be promptly dispatched with a bullet. For the rest of the act I had to lay motionless, lifeless, quite dead, in full view of the audience.

More often than not, these sought-after roles where a dead body is featured onstage for a substantial period of time are arguably restricted to amateur/non-professional/grassroots/community/ student productions as I can’t think of a professional with three years of training who would gladly accept such a dead-end opportunity to show off one’s skills. Also, there can’t be many theatre producers who would be happy to pay the wages of an actor who merely needs to lie still for an hour – a prop dummy is not only cheaper but also happens to be perfectly lifeless – by default.

The celebrated actors who we’ve interviewed over the years will no doubt only own up to playing such static roles whilst still in their pre-professional student or amateur days… probably. (It’s a great word isn’t it, ‘probably’; it gets you out of all kinds of legal ramifications. Stick the word ‘probably’ on to a sentence and all of a sudden it’s not a fact which you are stating, just your humble opinion. “Probably the best lager in the world.” Genius! …I would have said, ‘Pure genius’ but that could have opened up a whole different set of legal ramifications from the 250-year-old Guinness company.)

But I digress. As I see it, the whole process of playing a corpse should be split into three sections:

The first part takes place long before the audience gets to enjoy your Olivier Award-winning performance. At some point the lucky actor will be approached (usually by the director, in amateur circles) to take on this memorable piece of acting. A run-of-the-mill performer might feel put out, or even offended, at the very thought of playing a potential murder victim, until it is pointed out that portraying a corpse will probably be the single biggest acting challenge you are ever likely to face, not to mention that it is also “the most important role in the play.”

Only the most respected and talented of actors will be able to convincingly pull off such a difficult feat. You would have to be a complete fool (certainly an acting novice) to think that playing a deceased member of the human race is just a case of lying on the ground doing nothing.

Hence, one’s name is subsequently added to the cast list.

Once presented with the opportunity of being killed onstage you must, of course, make the most of it. Dying onstage is an art form in itself – as Shakespeare’s Bottom certainly confirm if he were here; his portrayal of Pyramus in his tragic death scene is the stuff of legend.

TIP: It may help dramatise the event in question if there is a well-placed sofa or chaise longue to fall over once the bullet has struck its target (as was the case in my own dramatic demise).

You may need to prepare for the fact that the director doesn’t want too much realism in this instance. When playing a drunkard (for example) the reins will be firmly pulled back to stop you going over the top in the quest for “perfect realism.” But if your ‘corpse’ keeps twitching for five minutes (post mortem) then you may find yourself accused of attempting to steal the audience’s attention. Never mind if, as a teenager you spent some time plucking turkeys at a Christmas turkey farm and, therefore, witnessed first-hand how our festive feasts react immediately after the deadly deed is done.

So do prepare to allow for some dramatic licence, no matter how painful. The director is in charge of bringing the spectacle to the stage – and who needs realism anyway… we all know that the sky and the sea aren’t really blue, more the result of the sun’s light rays refracting off the Earth’s atmosphere giving the appearance of a blue hue. The sea is seen as blue (especially from Space) when it reflects this blue hue. I mean you don’t see David Attenborough narrating an undersea shot filmed using a blue filter do you? Yet his big TV series was called Blue Planet. And there’s no end to the artistic licence used by some of our best-loved artists and authors… E.L.O.’s Mr. Blue Sky and Terrence Rattigan’s Deep Blue Sea… spring to mind. And while we’re on the subject, isn’t it odd how moonlit, night-time scenes are often bathed in blue? …or am I thinking about those am-dram stripes again.

The next thing you need to concentrate on is your breathing. Make sure it is kept to a minimum (TIP: don’t breath at all if possible). This can be a tricky exercise, especially if the adrenaline of being cut down onstage is still coursing through your veins. Nothing looks more alive than a fresh corpse struggling to catch its breath – chest heaving and sweat patches evident.

Once the initial thrill of never leaving the stage has passed and your breathing has returned to a more relaxed state you need to do all you can to stay part of, and follow, the action. That means you should resist the urge to sleep, catch forty winks or snooze… apparently a snoring corpse can look and sound pretty ‘naff’ or ‘amateur’ to many onlookers. Plus, come the curtain call and you’ll need to leap to your feet quickly in order to drink in that applause – that will almost certainly be directed towards you.

Also, you really need to resist the temptation to peep at the audience through the narrow slits in your closed, ‘dead’ eyes. You can bet your bus fare home that one or two members of said audience will have their own eyes firmly fixed solely on you, just waiting for the slightest indication that you have not in fact passed away; so don’t make their day, or evening… even if they are family members.

If you follow my advice, can employ all of these tips and follow my advice then there’s no reason why you too shouldn’t make a thoroughly convincing silent witness… to such an extent that you’ll earn the right to be cast in similar roles again and again… probably.

Note: Sadly, my own iconic performance took place around thirty years ago and there are no surviving records or images to bring you (what a tragedy). Instead, you’ll need to be content with a selection of other (mostly amateur) photos.