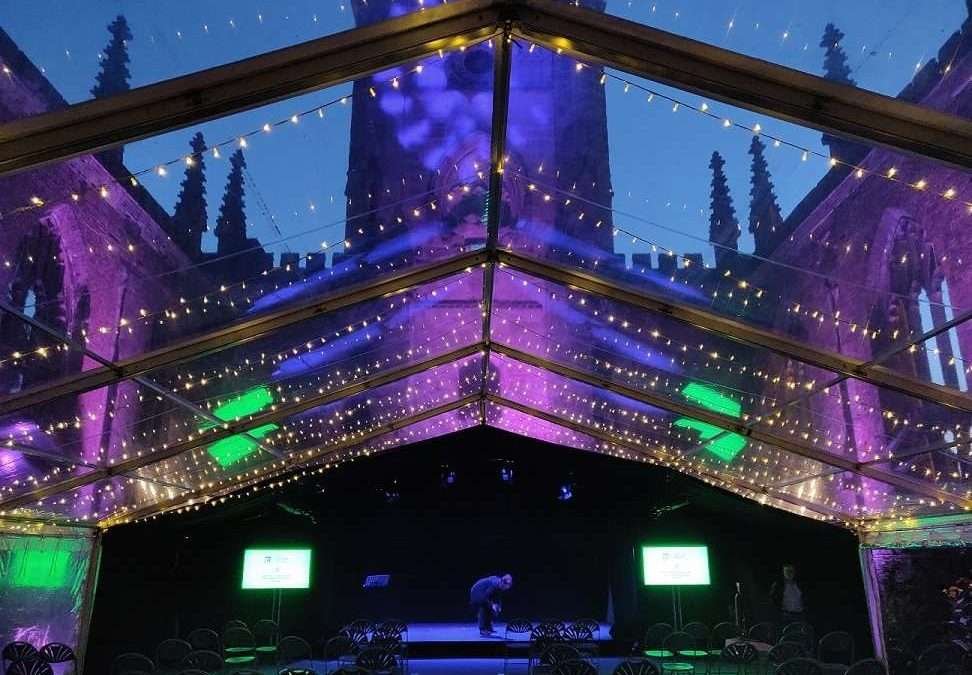 Thirteen new works have been premiered at the inaugural Little LTF outdoor live theatre festival in Liverpool during a week-long event, which has been hailed a huge success by organisers.
A sister event and new strand to Liverpool Theatre Festival, which was first staged in September 2020, Little LTF was launched to champion and showcase new works and rising talent as lockdown restrictions are lifted.
The festival ran for seven days between 12 – 18 Jul within the walls at St Luke’s Bombed Out Church in the heart of Liverpool city centre – outdoors but undercover in a specially designed performance space. The event adhered to all required Covid-19 guidelines, including limited numbers and social distancing.
The success of Little LFT comes just seven weeks before the return of Liverpool Theatre Festival in September which features more mainstream and established acts, artists, and productions.
During the week of Little LTF, an impressive 1,200 festivalgoers experienced 15 performances by 13 companies – resulting in six sell-out shows.
Due to popular demand, extra performances were also added for ADHD The Musical – Can I Have Your Attention Please? by Dora Colquhoun and The Monkey With No Bum – The Musical by Asa Murphy.
Little LTF featured A Brief Conversation About The Inevitability Of Love by Ian Salmon; Twice Nightly by Michael Alan Bailey and Maria Lovelady; The Forgotten Forest by Becky Brooks; Trapped: 12×8 – and – String (double bill) by Oliver Back; This Skin of Mine by Kai Jolley; Paul Robeson’s Love Song: An Audiovisual Experience by Tayo Aluko; ADHD The Musical – Can I Have Your Attention Please? by Dora Colquhoun; Superstar by Carl Rice; Now! The Musical by Anne Taft and David Paul; Tea Time by Graham Edgington; Support Your Local Library – The Rock Opera by Keith Carter and Ruth Cockburn; The Monkey with No Bum – The Musical by Asa Murphy; and 12 – The Rainbow Monologues by Grin Theatre Company.
Liverpool Theatre Festival was created by Liverpool theatre producer Bill Elms, who stepped in to bring entertainment back to audiences after theatres across the country were ordered to close their doors as part of the first Coronavirus lockdown in March 2020.
Plans are well underway for the return of the main Liverpool Theatre Festival which runs from 1 – 12 Sep 2021 and includes 2Gorgeous4U by Mark Davies Markham; The Last Five Years; Everybody’s Talking About Musicals; Electric Dreams; Opera Beneath The Stars; Broken Biscuits; Laughterhouse Comedy; Something About George – The George Harrison Story. With more to come…