The National Youth Theatre REP Company’s first national tour, which has already started, will feature two new productions of classic plays: Orwell’s Animal Farm and Shakespeare’s Othello.
The productions are co-produced with Royal & Derngate as part of its Made in Northampton season.

While both productions are highly recommended, May’s initial dates in Northampton have passed and the NYT’s London dates are sold out.

This now leaves only one remaining venue for each play… Othello can be seen at Bolsover Castle, Derbyshire from 23-26 June while Animal Farm is still to play at Soulton Hall, Shropshire from 16-19 June.

The REP Season concludes with Ordinary Miracle, a new play by the Bryan Forbes. It play in London from 2-4 July at the NYT Workshop Theatre. 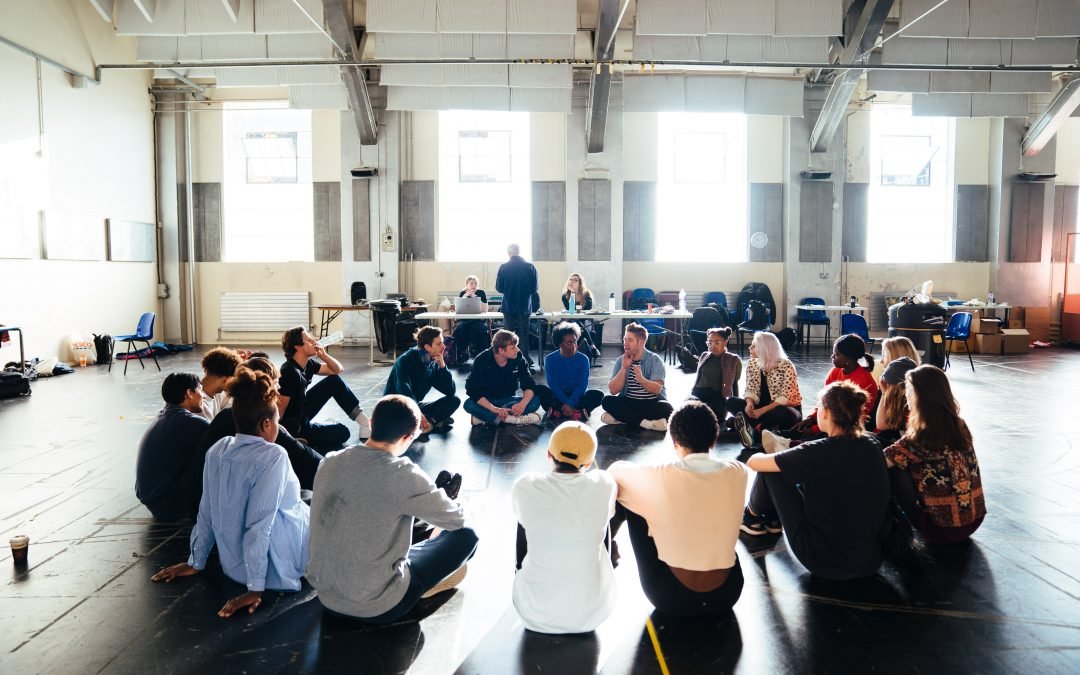 YOUR NEWS – Audition Fees Scrub, in Favour of Hub

As well as an audition or interview to become an NYT member, the Hub subscription includes a new online platform that will give users access to live and pre-recorded workshops with actors and online resources for only £2 a month or £24 for the year. The new model represents a 48% reduction from last year in the cost of joining the company. Young people can subscribe to the new scheme at: www.nyt.org.uk/hub.

Paul Roseby OBE, NYT Artistic Director and CEO, said: “The financial challenges any arts charity faces during and post this pandemic are without precedent and we are, sadly, no exception. Despite this we know we must drastically reduce our fees to all young people who will need our unique offer now more than ever before.

“The Hub is a new set of opportunities for anyone and everyone at a simple £2-a-month subscription, offering over twenty-four skills workshops from industry leaders a year, creative leadership sessions and online resources. There will be no extra cost for acting auditions, recalls or backstage interviews for those who wish to take part in them. 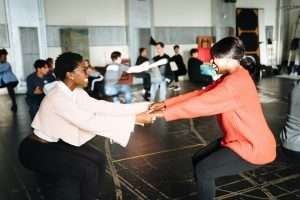 “This new subscription offer has been created through consultation with young creatives in our membership and beyond and builds on our industry-led ethos that connects talent to opportunity and helps contribute to more creative communities both locally and nationally. Automatic fee waivers and bursaries are available to those who need them, including young people on free school meals, and we will support access requirements.”

The Hub will give subscribers access to over twenty-four online interactive workshops a-year with industry leaders and NYT alumni such as Daisy Edgar-Jones (Normal People), Ashley Zhangazha (TINA! The Musical) and Joan Iyiola (Dọlápọ is Fine), with more names to be added. There will also be online resources including a self-tape masterclass with alumnus and Patron, Rosamund Pike (Gone Girl, Die Another Day), and a writing workshop with playwright and screenwriter James Graham (Quiz, Labour of Love).

On top of this, the scheme includes the opportunity to audition to become an Acting Member, to interview to become a Backstage Member and the chance to take part in Creative Leadership training with no extra cost.
The Hub platform will allow subscribers to connect with a nationwide network of young creatives, access community courses and events and unlock discounts for masterclasses and merchandise.

Hundreds of young people around the UK auditioning at their schools will also gain access to NYT’s new Hub. Young people aged 11-26 can subscribe to the NYT Hub, with 14-25-year-olds eligible to audition or interview for Acting or Backstage membership.

The launch of NYT’s Hub follows an intensive period of digital activity since the start of the global pandemic at NYT, which has seen the charity reach over ten million audience members online, offer 1.7k hours of activity enabling over 17k creative opportunities and facilitate over three hundred paid roles for freelance creatives. NYT’s online programme has included partnerships with TikTok and Sky, events, showcases and festivals co-curated with young people as part of the Made by Members programme and online research and development with NYT Associate Artists for new work engaging over two hundred and fifty young actors nationwide. In November National Youth Theatre also released a film displaying the work and activity that they have achieved in 2020, which can be viewed on YouTube below… 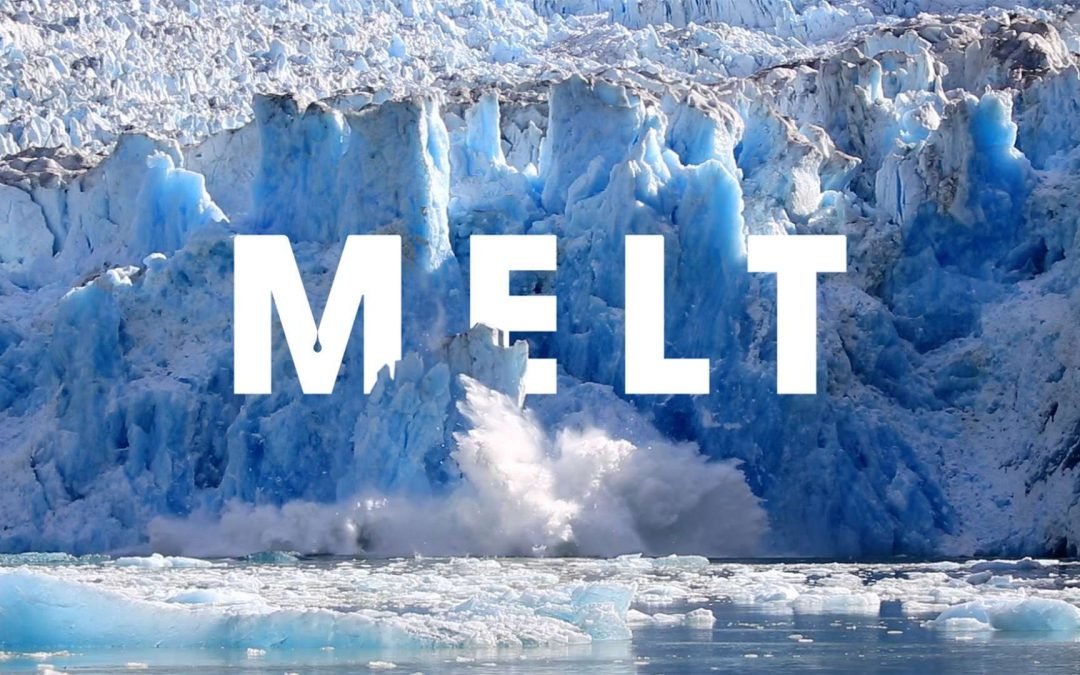 NYT’s 3-Year Project for the Environment (Your News)

The National Youth Theatre (NYT) in partnership with the University of Hull announces MELT, a major new three-year project exploring climate change and culminating in an outdoor processional piece with a cast of 1,000 young people.

In light of current restrictions on movement, MELT has already begun interactive digital research and development sessions and group rehearsals via video conferencing with an initial cast of 200.
The sessions have informed a series of physical and digital dramatisations focussing on the flooding of coastal areas caused by climate change. They will be released over the course of the next three years. On 20 June (longest day/Summer Solstice), a digital sharing of work created by members during the research and development phase was live-streamed via www.nyt.org.uk/melt (where you can still watch it) and included an invitation to young people across the UK to join the creative conversation in response to the climate crisis.

The programme finale will see a large-scale processional outdoor piece travel through cities and sites on the East Coast of England in 2021/22 to highlight the climate emergency. Dates and locations will be announced in due course.

They are joined by award-winning 16-year-old writer Freya Hannan-Mills, who is the first of a collective of young writers to be commissioned from NYT’s on-going online youth-curated events during lockdown, which include RUSH a showcase for Britain’s best young artists of colour curated by Shakira Newton back in May (www.nyt.org.uk/rush). Hannan-Mills successfully auditioned for the NYT in 2019 as part of the free Auditions Access Fund, supported by Patron & alumnus Hugh Bonneville.

This is the fourth major environmental work at NYT in the last decade, following S’warm which saw hundreds of young actors swarm iconic London sites in 2010, SLICK in response to plastic in our oceans at Sheffield’s Park Hill Estate in 2011 and FLOOD in partnership with Hong Kong Youth Arts Foundation in 2018. 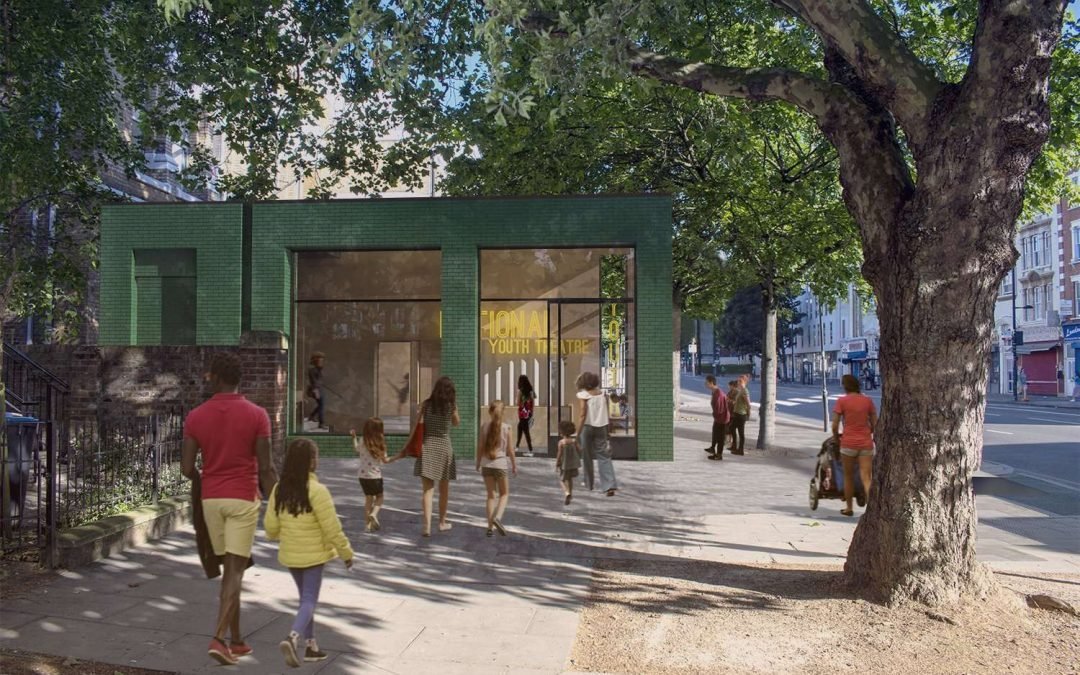 The National Youth Theatre (NYT) has been awarded £2million from the Mayor of London’s Good Growth Fund to undergo a major renovation to its Holloway Road building in North London.
The radical development will enable NYT to double the number of young people they engage in the building through their annual programme which provides, free and affordable drama opportunities that champion diversity, creativity and routes into the creative industries.
The essential upgrade will secure and develop this thriving production hub for young people where creative on-stage, off-stage and digital talent of the future will receive world-class training and development opportunities that offer free and affordable alternative routes into the creative industries.
The building will include a new front pavilion, providing a fully accessible entrance from Holloway Road that is welcoming to all and including a new rehearsal studio and reception. A new 200-seat studio ‘workshop’ theatre, three rehearsal spaces and a co-working space will also be created within the existing building, allowing NYT to double the number of young people coming into the building with future plans for a new Pocket Park to the south entrance in partnership with London Borough of Islington to improve air quality in the immediate location on the Holloway Road.
The studio workshop theatre will stage performances by NYT members from around the UK, NYT’s flagship free talent development companies the NYT REP, Playing Up and Stepping Up, and other new work by NYT Associate Companies and emerging creatives. The NYT will continue to stage work in the West End, and at leading theatres elsewhere in London and around the UK.
The new spaces will be made available to young people from Islington, London and nationwide to create new work together. School groups from around the UK will also be able to participate in regular skills workshops at the venue and see new NYT curriculum productions, which last year included Frankenstein, Great Expectations and A Midsummer Night’s Dream.
The new creative co-working space will provide opportunities for emerging playwrights, producers and theatre companies and embed NYT’s established Creative Leadership programme. The Creative Leadership programme provides free training and a structured route into paid leadership roles within the NYT and across the creative industries.
These new facilities will enable the expansion of NYT’s award- winning social inclusion programmes, Playing Up & Stepping Up continuing the organisation’s vital work with even more young people not in education, training or employment by providing opportunities to develop creative practice and gain accredited qualifications. Now in its 11th year, Playing Up has proved hugely successful with 85% of participants progressing into employment, further training or education opportunities. Applications for the 2020 Playing Up and Stepping Up cohorts are now open.
Building work will commence in May with the opening of the new building planned for Spring 2021.
Through support from Arts Council England with a £500k grant, NYT is also delighted to have secured the 999-year lease for the Holloway Rd building, which has been home to NYT since 1987. Having previously been faced with a declining lease the NYT has taken this positive step to cement the future of the venue for years to come. The expansion will ensure long-term sustainability for NYT to continue its work nationally at a time where it is more vital than ever due to the sharp and continuing decline of arts provision in schools.
A resolution to grant planning approval for this radical redevelopment was confirmed from Islington Council on 14 January. Fundraising is continuing for the final 4.5% of the costs of the project.
Over its sixty-four years, the world’s first youth theatre has worked with hundreds of thousands of young people, many of whom have passed through its doors in Holloway Road.
From alumni Daniel Craig, who also helped to paint the walls when the organisation first moved into the building, to Chiwetel Ejiofor, Rosamund Pike and Matt Smith rehearsing their London stage debuts at the venue, to Matthew Warchus embarking on his first directorial role.
Originally a 19th Century music hall designed by Scottish architect George Truefitt known as ‘Holloway Hall’, the building also hosted rehearsals for James Graham’s first paid commission Tory Boyz and the NYT Team Welcome Ceremonies at the 2012 Olympics & Paralympics.
Other famous alumni who rehearsed as teenagers at Holloway Road include Zawe Ashton, David Oyelowo, Orlando Bloom, Adeel Akhtar, David Walliams, Matt Lucas, Jessica Hynes, Gareth Pugh and Sope Dirisu, among others.

The NYT hosted its annual fundraising gala in February to the theme Baroque ‘n’ Roll at Spencer House. The event was attended by VIP guests, past alumni and current NYT performers and featured music and theatre performances, auctions and fundraising events to raise a record-breaking £230k.
Hosted by NYT Patron & Alumnus Hugh Bonneville, music came from Beverley Knight, among others, and was attended by NYT’s Royal Patron HRH The Earl of Wessex.