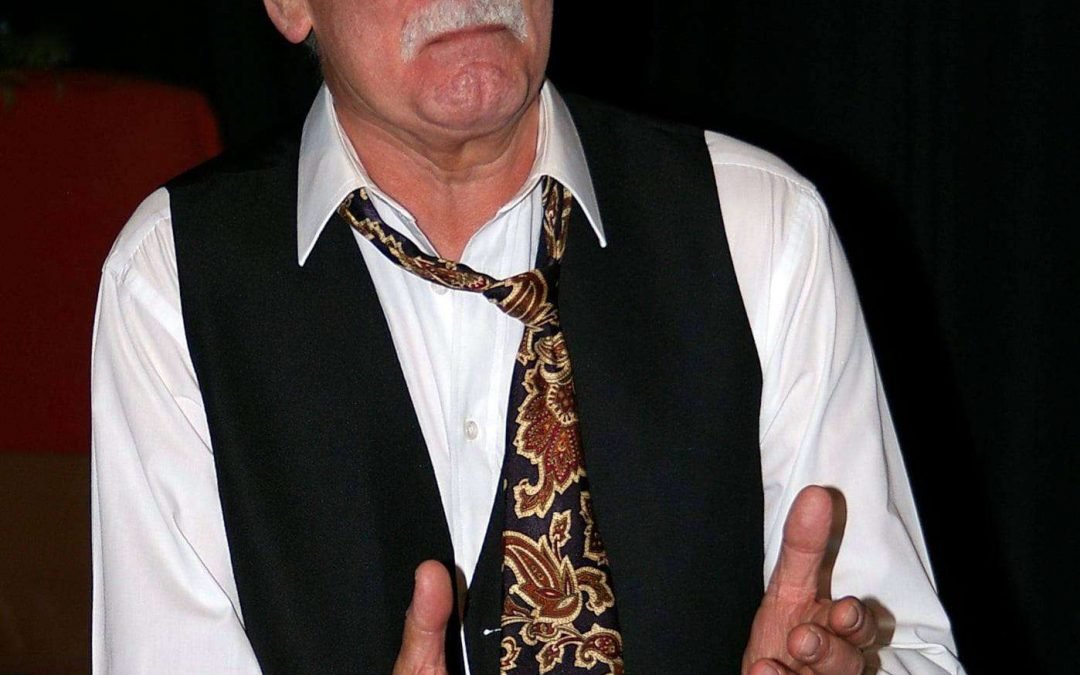 Vic Roberts, who passed away recently after a short illness, had a long and highly respected career in the Nottingham amateur theatre scene as a talented, accomplished and versatile actor with an uncanny ability to quickly learn his lines.

He had been a stalwart of the Bonington Players and, before that, the Prospect Players and had been rehearsing for a role in The Lady Vanishes before was cancelled last March.

Vic had twice won the NANDA Actor of the Year award whilst with the Bonos. Firstly in 2002, playing Albert Parker in When We Are Married and, in 2011, when he was a magnificent and iconic Willy Loman (see above) in Arthur Miller’s Death of a Salesman. He is going to be greatly missed.

“So sad to hear this. He was a lovely guy and was very welcoming to me when I joined Bonington back in the 90s! Always fun to work with too. Sending much love to his family and friends at this awfully sad time.”

“Massive fan of Vic. He was extremely supportive and really talented. He loved performing and was such a character. He was a wonder to work with on stage, and he will be sorely and genuinely missed. Love you lots buddy, and hope you’re chatting with those acting heroes of yours! xx”

“Such sad news. I first met Vic when I joined the Prospect Players, in about 2003. I was cast alongside him in Ayckbourn’s Relatively Speaking – me, the beginner, and he with many years’ experience. In the intervening years, we’ve acted together in so many productions, with both Prospects and Bonnos – it’s a shame it won’t happen again. Rest in peace, old mate – and thanks for all the fun!”

“Was it Vic who did the walk-on, realise he shouldn’t be there, pretend to read his paper for five minutes and then walk off again? That story always makes me laugh. Still so shocked at this news. Going to really miss seeing him at Bonnos. Always such a lovely man with a cheeky sense of humour. Xx”

“I met Vic in 2018 when I joined the Bonington. He made me feel so welcome, and I seemed to gravitate to sitting near him during tea breaks. He made me laugh so much. He had enough stories to fill several lifetimes and I wish I could have heard more. Thank you Vic – I’ll miss you.”

“I worked with Vic in many productions; a man of such talent and experience. I learnt so much from him, he gave so many people so much pleasure. God bless my friend you’re going to be missed by everyone who knew you.”

“Vic was such a talented actor and also so generous with his time, care and advice. I am glad I got the chance to perform with him. He was such a presence on stage and such a welcoming and friendly gent off it. He will really be missed.”

“Vic was a great guy. I worked with him on the buses for years, he was my driver at Bulwell then Bilbro garages. Sadly missed. Only got in touch with him last year, many happy times we had together.”

“I never let him forget his ad-lib in A Midsummer Night’s Dream, ‘The thing and the thing…’ Classic! Miss you Vic.”