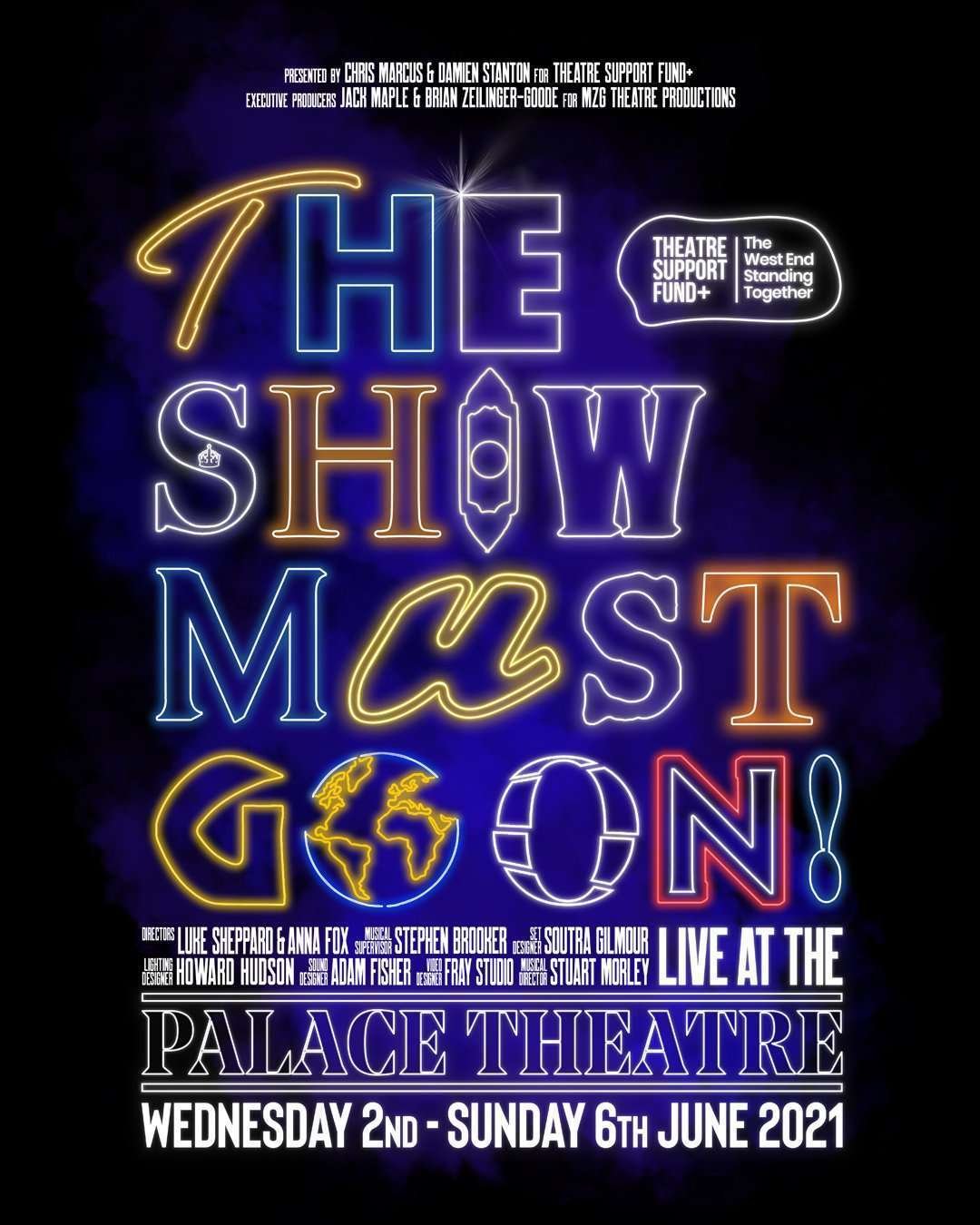 THE SHOW MUST GO ON LIVE! featuring an all-star musical theatre cast!

After a record breaking on-sale in November, the producers of THE SHOW MUST GO ON LIVE! are delighted to announce 18 West End shows and an all-star musical theatre cast coming together for a unique one-off concert in the biggest West End celebration this summer. The show will run for seven performances only from 2 – 6 June 2021 at The Palace Theatre, full details and tickets can be purchased from www.theshowmustgoonlive.com

The concert will be hosted by musical theatre legends, Bonnie Langford (“9 to 5 the Musical”, “42nd Street”) and Trevor Dion Nicholas (“Hamilton”, “Aladdin”).

Bonnie said today, “I am delighted to be hosting this special night where all of these West End musicals will be performing together to raise money for some incredible charities. This is a once in a lifetime show, I am truly honoured to be a part of it and alongside the fabulous Trevor too! I m looking forward to getting dressed up and being in a theatre again, it’s going to be a magical night and a wonderful way to kick off the return of the West End. We can’t wait to see you all there”.

Trevor said today, “This is an opportunity for the entire theatrical community in the West End  to stand together and celebrate the return of our beloved industry. Despite the struggles of the last year, we remain united and doing what we do best – creating art that provides people with an escape. We’re still here, we’re still fighting and we are stronger than ever. I cannot wait to welcome everyone back to the stage, where they belong. It’s going to be a thrilling night”.

All shows which appear on the iconic The Show Must Go On! design will be performing alongside Pretty Woman and a West End debut performance from Back To The Future. This will be the first time in history these West End musicals will come together for one night of pure joyous entertainment which celebrates the wealth of talent in London and includes a multi award winning creative team, over 50 performers and an orchestra made up of some of the finest musicians in London.

The concert will also include a brand-new opening number, written by West End musical writing duo Stiles & Drewe called ‘The Show Must Go On!’ which celebrates the theatre industry in these current times.

The multi-award winning creative team includes: Luke Sheppard (“& Juliet”, “In The Heights”) and Anna Fox (“Guess How Much I love You”), who will direct the concert, Stephen Brooker (“Mary Poppins’ and “Les Misérables”) as musical supervisor, set design by Soutra Gilmour (“Cyrano de Bergerac” and “&Juliet”), lighting design by  Howard Hudson (“&Juliet”, “9 to 5 The Musical”). Sound design by Adam Fisher. (“The Last Five Years” and associate sound designer on “Miss Saigon”), video design by Fray Studio (Disney’s “Frozen” and “Harry Potter and the Cursed Child”) and Stuart Morley as musical director (We Will Rock You” and “Only Fools and Horses”).

THE SHOW MUST GO ON! LIVE AT THE PALACE THEATRE is produced by Chris Marcus & Damien Stanton for the Theatre Support Fund+ with Executive Producers, Jack Maple & Brian Zeilinger-Goode for MZG Theatre Productions.

Capacity at the Palace Theatre has been reduced to comply with COVID-19 Secure guidelines for social distancing plus robust risk mitigation. In addition to hand sanitation, face coverings and track and trace, other measures will include contactless tickets, temperature testing and the deep clean and sanitation of the theatre.

The Show Must Go On! Live at the Palace Theatre 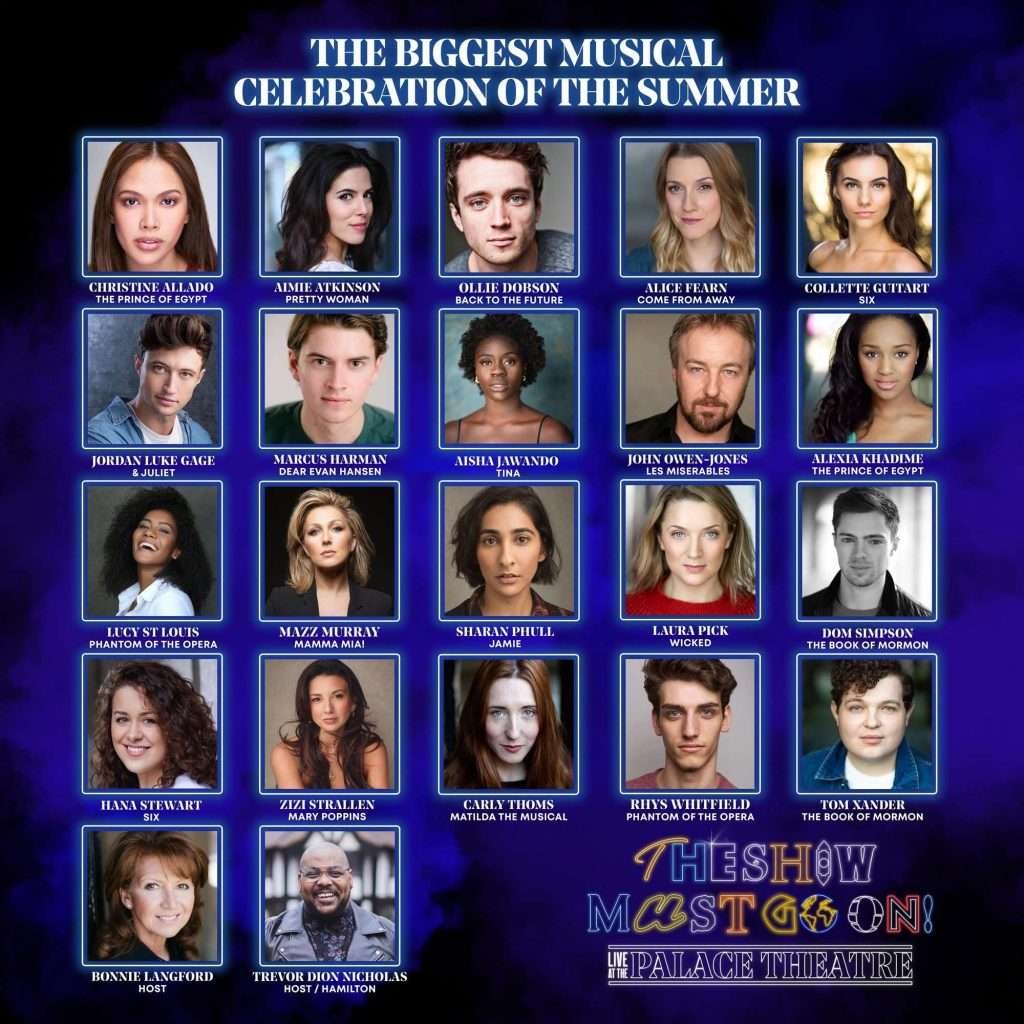