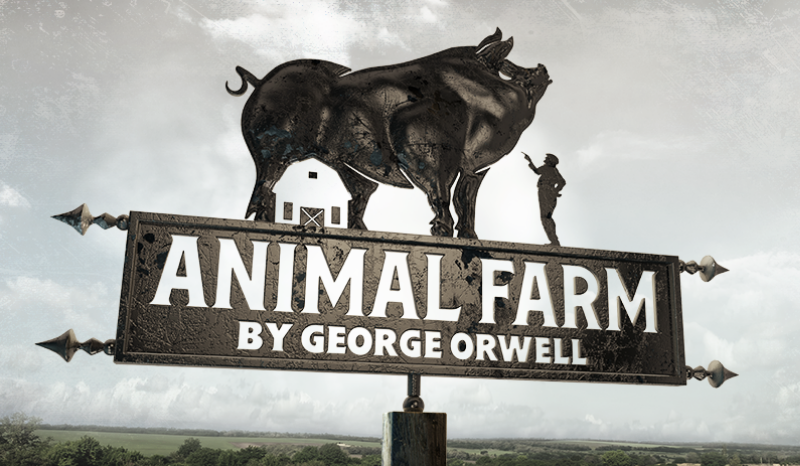 WITH DESIGNS BY BUNNY CHRISTIE & PUPPETRY BY TOBY OLIÉ

PRESENTED BY THE CHILDREN’S THEATRE PARTNERSHIP

IN ASSOCIATION WITH BIRMINGHAM REP

The brand-new production will embark on an extensive UK tour, opening at Birmingham Rep from 22 January 2022, with press night on Wednesday 2 February.  The play then tours to Cambridge, Newcastle, Bath, Norwich, Salford, Plymouth, Nottingham, Coventry, Blackpool, Liverpool, Canterbury, Richmond and Wolverhampton, completing its run on 28 May 2022 at Bromley’s Churchill Theatre.

The production also combine the forces of some of UK theatre’s most talented creatives, including designs by the four-time Olivier Award-winning Bunny Christie (A Midsummer Night’s Dream, Company, Ink, The Curious Incident of the Dog in the Night-Time), and puppetry by Toby Olié (War Horse, Running Wild, The Grinning Man, Goodnight Mister Tom).

The animals of Manor Farm drive out the farmer and run the farm themselves.

A revolution. And then what? Then freedom. Every animal will be free.

Old Major, the prize boar, calls the animals of Manor Farm together.

He has had a strange dream of a better future.

George Orwell’s world-famous, biting political novel was first published in 1945 and tells the story of a revolution and its aftermath. Re-imagined by an award-winning creative team, Animal Farm is a dynamic, daring and contemporary take on a timeless story.

Icke previously worked on another of Orwell’s classics, 1984, which he co-adapted and directed alongside Duncan Macmillan, garnering him his first Olivier Award nomination for Best New Play in 2014, enjoying smash-hit runs in both the West End and on Broadway. Animal Farm also reunites Icke and Christie following their celebrated 2016 collaboration on The Red Barn at the National Theatre.

The production is produced by Children’s Theatre Partnership (CTP) in association with Birmingham Rep. CTP creates bold and imaginative theatre for young people, engaging new audiences and aiming to inspire a life-long love of theatre.

Produced by Children’s Theatre Partnership in association with Birmingham Rep