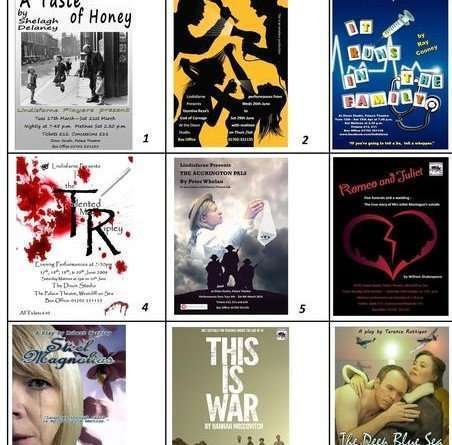 More of the same

Well, realising that my drama chums are really missing not taking part in any shows, we’ve decided to find some funny plays , and do some Zoom play readings.  It’s also a way to make some money as the drama group still has bills to pay and no money is coming in.  This way people donate a small fee to take part, and it is also a chance to socialise with friends that we haven’t seen for months.  As we decided that we needed a laugh we’ve chosen Pinero’s The Magistrate as our first reading, as apart from anything else, it is out of copyright.  We have still had quizzes including one of recognising parts of our posters- I must say Lindifarne productions have had some excellent posters.  I particularly like my poster for Accrington Pals.

I also decided to write a silly little verse Zoom play.  We have cast it, and we’re going to perform it over the airwaves.  This is a way of filling the gap of not performing.    Some of my professional actor friends are busy making short films, which apparently you are allowed to do even in lockdown.  One   actually involves cold-water swimming.  Glad it’s them, not me.

I was looking forward to the Musicals: The Greatest Show on BBC, with some familiar and some not so familiar stars of the musical stage.  However, somehow it seemed very flat with no audience.  I thought Lea Salonga singing from the Philippines via Zoom was particularly good.  However, when the stars such as Sheridan Smith, Michael Ball, Ramin Karimloo and others ended their big number, and there was no round of applause it felt very strange.  As I’m not a fan of Sheridan Smith, as I think she is vastly overrated in musicals, that didn’t help matters either.  Unlike some others, I wasn’t surprised that Amanda Holden could sing as I ‘d previously seen her in Thoroughly Modern Millie, however I was surprised that she has morphed into Katherine Jenkins.

I ‘d already experienced how flat it feels with no audience, when I went to Warner’s Holiday Resort, just before Christmas. The entertainment was provided on screen by stars pre-recorded in an empty theatre.  There they were talking to the non-existent audience and ended by bowing and thanking the non-existent clapping.  There we were watching Kerry Ellis, just as in the TV show, and good as she was, it was disappointing.

Meanwhile, the local theatres are still closed, but to add insult to injury, one of them is open as a vaccination centre.  So, when the time comes instead of performing there I’ll  be receiving a jab.