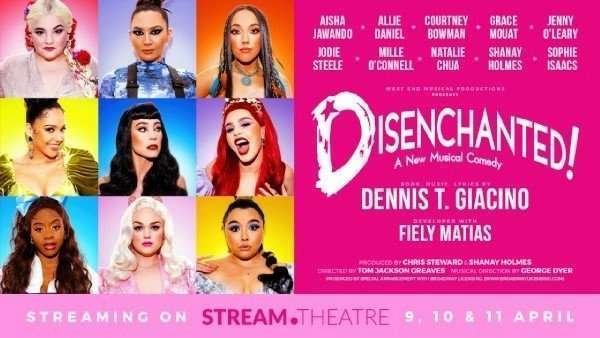 The all-female cast are the main strength of the production, which has book, music and lyrics by Dennis T. Giacino. With Tom Jackson Greaves as Director and George Dyer as MD, the core creative team are male, making songs with refrains like Big Tits sit rather uncomfortably at times.

It is, of course, an entirely US lens through which we see these characters; there is no acknowledgement here of the more nuanced take on some princesses in UK culture over the last thirty years, with gender politics addressed in many children’s books and quite a few pantomimes, with theatres like Hackney Empire and Stratford East leading the way.

The production, filmed using green screen techniques, begins with a complex and serious statement about the issues to be raised and a suggestion of suitability only for over-16s: a mite too cautious I think. With every member of the cast a princess, it was difficult to see where a narrative arc would be found: but there wasn’t one. For the most part, the show consisted of each princess taking her turn to sing a song about her own situation, with minimal narration from Snow White, Cinderella and Sleeping Beauty, the latter being given a rather tortuous running gag about being asleep in her dressing room. Surely the whole point is that Sleeping Beauty as controller of her own destiny would not fall asleep?

The saving grace of the production – and the reason for my 4 star rating – is the talented cast of ten. They give their all in the difficult genre of filmed theatre; a particularly challenging task with an over-emphatic piece like this which would probably be much more effective in a theatre than it is on screen.

The first number complains about happy-ever-after endings always leading to marriage, and that seems to be the main theme; lead actors Jodie Steele (a very energetic Snow White), Sophie Isaacs (definitely Cinderella after the ball when disillusionment has set in) and Sleeping Beauty (Allie Daniel, doing everything she can to put over some weak lines) set the scene and pop up from time to time to introduce other characters. We never see the forces of evil, in the form of Disney executives, but they are referenced from time to time.

The music is pleasantly tuneful, often in the patter song tradition, and usually allowing words to come over clearly: important in a piece that has a message to transmit. The actors work hard to differentiate their characters, ranging from the expressive Natalie Chua as Hau Mulan pointing out that “I might be lesbian… the only princess here without the guy” to Millie O’Connell as a Southern Little Mermaid without a tail.

There are occasional group routines such as The Princess Complex, leading in to that song complaining that it is only their “big tits” that makes men worship them. The production switches between excessively broad moments like this to the presentation of Pocohantas, the only historical character portrayed, in which Grace Mouat’s plaintive solo is totally undercut by the sudden appearance of screen captions about the appalling way the real character was treated.

In a show with concerns about stereotyping it is surprising to see how Rapunzel is portrayed, after suggesting that all these princesses have Germanic origins (not in fact the case). Jenny O’Leary makes the most of the number that follows however, a good old-fashioned patter song called Not One Red Cent. More nuanced is the presentation of The Princess who kissed the Frog, who sings about being the princess “that’s finally gone black.” An impressive performance from Shanay Holmes and every word comes over.

One or two of the songs could have a life outside this show, particularly Princess Baldroulbadour’s lament about being turned into Jasmine and having her story moved from its Arabian setting. Courtney Stapleton impresses as she sings that she is a “secondary princess… the spotlight’s on the guy who rubs the lamp.” In a strong cast, perhaps the most impressive performance because it contrasts with the others is that of Aisha Jawando as Belle. She handles her song with skill and subtlety and lifts the piece on to a whole new level.

Snow White eventually gets to sing about the princes who put them all where they are (with most of the cursing bleeped out despite the 16+ rating) and Sleeping Beauty, rather surprisingly given the message of the show, sings that “when I sleep I’m perfect… I flit around with glee, In a gown by Gi-ven-chy…” However, she eventually decides she is perfect just the way she is, and the other princesses agree.

Despite the talents of the cast, towards the end of the show it all gets quite samey, and the constant mugging at the camera from the narrators becomes tiring. Hair, make-up and costumes are impressive but there was clearly no budget for props; better to do without than, for example, to just wave little plastic sharks around when the Little Mermaid appears. There is no choreography as such, although the cast all do their best to keep the show moving.

The finale, Once Upon a Time, could also work as a stand-alone number, making the point that the days of being saved by a prince are over. This show has an important message but one which has been put over more persuasively and in more complex ways by Angela Carter and others. As is so often the case, a flawed show is saved by a talented cast.