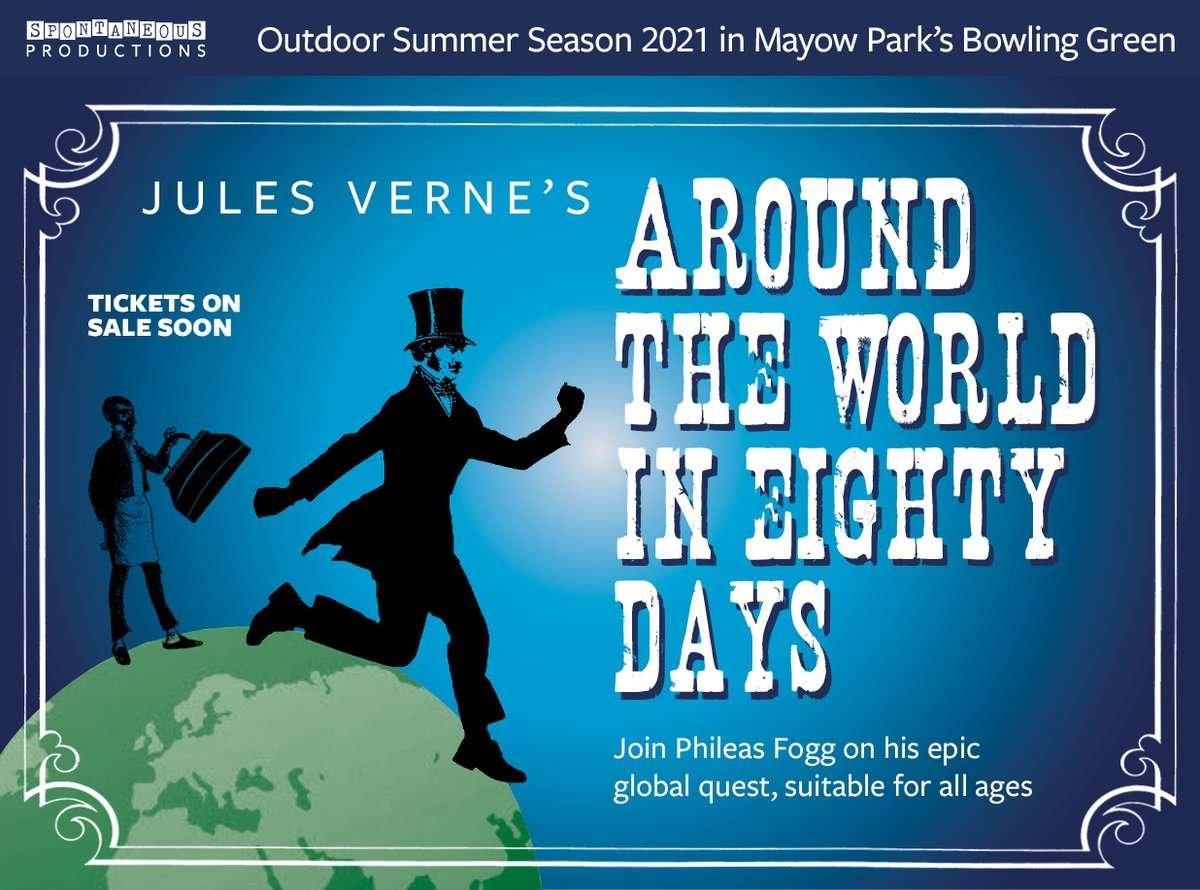 Show: Around the World In Eighty Days

Credits: Adapted by Jonathan Kaufman and Jane Walker from the book by Jules Verne. Original songs and music by Paul Tornbohm. Presented by Spontaneous Productions in association with KIRKDALE BOOKSHOP.

Around the World in Eighty Days

In all honesty I don’t expect to walk a mile from my south London home and find a 5-star show in a local park. But a five-star rating means one of the best examples of a show of its type that the reviewer has ever seen – and that’s precisely what this is. Complete with sparky plot, imaginative promenade staging, a four-piece live band, gentle inclusion of topical issues and a show case for the skills of five fine, immaculately directed actors, it is an outstanding piece of work.

Loosely based (adapted by Jonathan Kaufman, who also directs, and Jane Walker) on Jules Verne’s 1873 novel this version of Around the World in Eighty Days gives us Phineas Fogg (Hjalmar Norden – excellent) taking a bet for £20,000 for his friends at the Reform Club and then setting off on his global circumnavigation with his servant Passepartout. In this show – stroke of genius –  Passpartout is played by the charismatic, Jimand Allotey and reworked as a very French woman in disguise fighting the establishment because she’s an inventor and wants to be recognised.   Once they reach India, of course there’s also a subtext about colonisation and tiger hunting – which is picked up again in California when they encounter the Navajo. It’s neatly done and seamless and feels absolutely right for now.

William Hastings delights in a whole raft of roles including the dim but determined Inspector Fix who thinks Fogg is a bank robber and pursues him. I also enjoyed his utterly ghastly tiger-shooting Cromarty. Lana Eyre plays Miss Lily, a Shanghai woman on the make, among other roles all with aplomb, and Deborah Chatterjee finds real dignity and humour in Rani, the Indian Queen who becomes Fogg’s love interest, as well as captaining a ship in trouble and being a suitably tiresome Hooray Henry at the Reform Club.

It’s a show full of strong staging ideas too. When Fogg and Passepartou cross the channel by balloon there’s a simple box they get into and walk it while the balloon is held aloft over the wall behind them. Similar witty ingenuity gets them across the Indian Ocean on a steamer and from San Francisco to New York by train.

The old bowling green in Mayow Park is a large square grassy space accessed by steps down and with a wide ledge (originally for spectators?)  – effectively an integral stage around its edge. This show is staged in four different parts of the green so that each site represents a place. On two corners are tents which act as “tiring houses” for all those quick changes.  You really couldn’t make better use of the space.

And as if that weren’t enough the four piece band Red, Hot and Blue are there sounding like the Temperance Seven (oh how  I love a farty sousaphone – bravo Marc Easener). They don different hats in different countries and play appropriate music such as “Those Magnificent Men in Their Flying Machines” for the Channel crossing,  “Nellie the Elephant” for a gorgeous two person pachyderm in India, “The Stars and Stripes” for arrival in the USA and so on. They also provide sound effects such as Big Ben in London or the train in the USA where they also form part of it. And trumpeter, Peter Leonard does a witty little mime appearance as Queen Victoria.

Yes, it’s a very special show. There are four more performances. Get there if you possibly can and take the family with you. It really does work for any age.