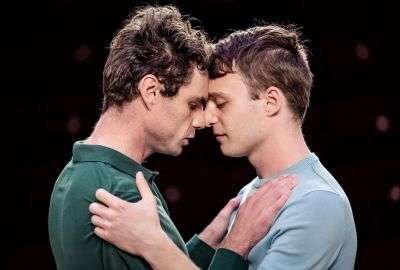 Cock sees the Minerva Theatre transformed in the round to represent the Mexican cockfight which inspired Mike Bartlett to write the play and which gave it the poly-entrendre title. The design is spare, being nothing more than a lighting rig dropped into vision and a sharp line (hexagonal? I failed to count the sides) on the floor, delineating the edge of the acting area. All is red.

The central protagonist is John (Luke Thallon), the only named character and, as the name suggests, a potential everyman. John has been out as gay for years, has been in a relationship with M for seven years, has never been attracted to anyone except men. Consequently, he is startled to find himself attracted to W, a woman he sees on a virtually daily basis travelling to work. Their mutual attraction flares into a sexual relationship, leaving John conflicted. His whole sense of self has been destroyed and the rest of the play explores his attempts to resolve his self-image, whilst trying not to hurt either M or W (a sensitive and compelling, Isabella Laughland), who are each pressing him to make a decision – is he gay or straight? The problem is, he doesn’t know. M’s father, F, a wonderfully insinuating tactician, (Simon Chandler) arrives to support his son’s claim to John and John literally writhes between them all and his own distressed mind.

Mike Bartlett intended the play to happen without props or furniture and with no mime action for movements indicated in the words. This leaves the audience free to concentrate on those words and their impact, enlivened only by the expression given to them by the actors. Director, Kate Hewitt, makes clever and thoughtful use of the blank space as the actors spin closer or further apart as their emotions dictate. The action of the play jumps about in time sequence as John’s emotions become more enmeshed, each scene delineated only by a flash of red light in the blackout and a crashing chord.

The themes of the play are, perhaps, even more relevant today than when it was first written and produced in 2009. Society is now being forced to recognise not just two genders, not just two sexualities and we are all more aware of just how multi-faceted we are. In a production of four strong and nuanced performances, Luke Thallon and Matthew Needham (M) shine. Needham’s comic timing is excellent, and the play is funny as well as challenging. Despite his often barbed comments, we feel M’s agony as the lover of many years who fears his love is being discarded and his life shattered. We feel his powerlessness as the decision is John’s and John’s alone. Thallon we see wracked with guilt and indecision, his emotions playing across a mobile face, one moment seeking to ingratiate, the next to express his need to re- find and define himself.

Although this play deals with sexual matters, it is much more about relationships, regardless of sexual orientation. Somehow this is all the stronger because the actors never actually touch, even in intimate moments.

This is definitely one not to miss. It runs to 27th October.