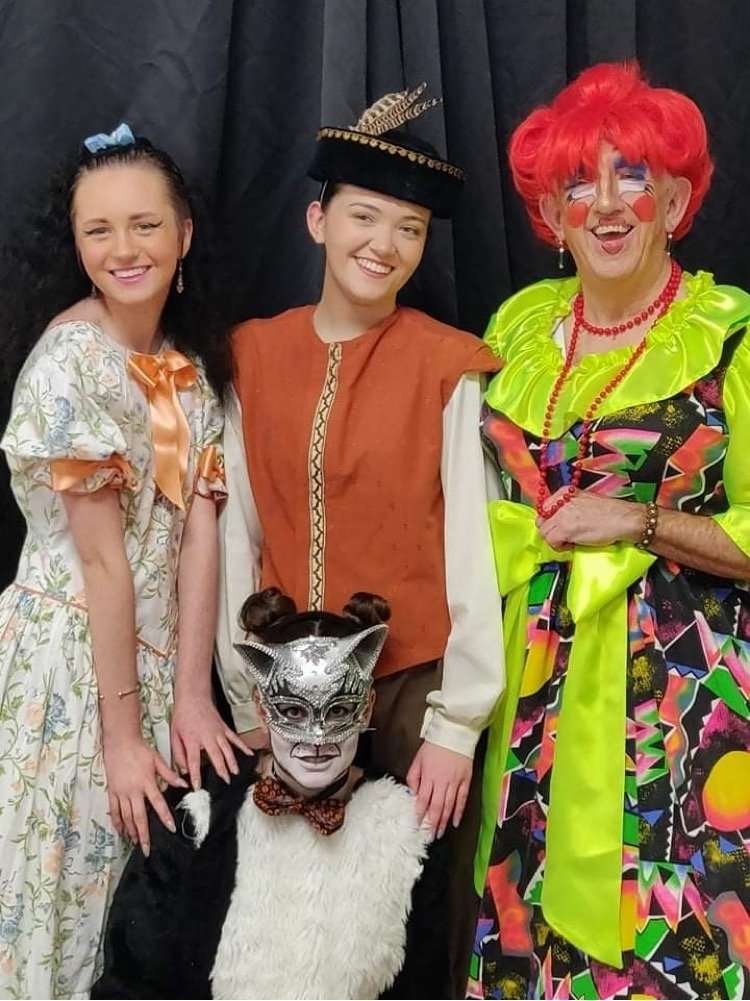 Pantomime, beloved by children and adults alike, is the mainstay of many amateur theatre groups. Trinity Theatre in Cowes have staged pantomimes for decades, their matinees are usually full to the rafters with families enjoying a pre-Christmas treat. Audience numbers were low on the afternoon I went to see the show. Whilst some people are still reticent about returning to large social gatherings, I was still quite surprised to see so many empty seats at the first matinee.

For those who don’t know the story of  Dick Whittington, it is the classic rags-to-riches adventure where Dick goes to London to seek his fortune. Soon after his arrival in the capital, Dick is befriended by Tommy the Cat, who, along with Fairy Bowbells, helps him to thwart King Rat.

On reading the programme it was evident that that this was a scaled down production, that, plus illness, resulted in a depleted cast. The whole ensemble, fourteen in total, were on stage for the uplifting opening number ‘A Pantomime Tonight’ – a lovely tribute to the late Stephen Sondheim. It was a stellar line up, with years of experience between the veteran panto actors. Dinah Bowman was superbly sinister and scary as King Rat and was booed on every entrance. Fairy Bowbells was played by Helen Clinton-Pacey who gave a heartfelt rendition of Nobody Loves A Fairy When She’s Forty.

Paul Stevens was on excellent form as Sarah the Cook and delivered his lines with excellent comic timing. I loved his rendition of ‘Hey Big Spender’. A consummate dame, Paul worked the audience throughout, telling them it was going to be a long afternoon when they weren’t as responsive in the first half. The object of Sarah’s amorous affections was Alderman Fitzwarren and his identical twin brother Captain Horatio Fitzwarren – a joyous double whammy of a performance by Steve Taverner.

I was very impressed with the three younger principals. With good chemistry between principal boy and girl, Ruby Beaman delighted as Dick Whittington and gave a confident and accomplished performance. At a few days’ notice Aimee Howard stepped up from the part of Idle Jack to that of Alice Fitzwarren and, although on book for some of it, did a magnificent job. Dick and Alice’s duet, Eternal Flame, was well sung. Lexi Skeldon-Downer captivated as Tommy the Cat with plenty of cat-like actions throughout, using the stage well.

Director John Abraham threw himself into the role of Idle Jack and was the perfect foil for the dame. Another pantomime stalwart, Duncan Greaves, gave a suitably regal performance as the Emperor of Morocco.

The three named chorus members were down to one, with assistant director Nessa Law swelling the ranks. There were only five youngsters in the children’s chorus, but they all gave an energetic and enthusiastic performances.

The set looked good with the use of cloths to define a sense of place. I particularly liked the London cloth and ferries sinking during the shipwreck scene. Tommy the Cat waving from the crows’ nest was a lovely visual.

Music Director Luke Mulhern had fallen foul to Covid and had to record the music. Drummer Ed Jager added percussion in all the right places. The choice of songs fitted the action well. I enjoyed the dance routines, and Steve Taverner’s tap solo.

The wardrobe team were in fine form as the costumes were ideally suited to the characters, from the bright sparkly fairy to the leather jacket wearing King Rat. The dame costumes were colourful and over the top.

This was a technically accomplished production, though the telephone ringing after it was picked up allowed for a funny ad lib from the dame who quipped, “I’ve picked it up, Dear.” Hilarious.

There weren’t loads of laughs to be had from this script, however there were some funny set pieces, like the blackberry and apple crumble sketch in the shop scene. The topical ferry and floating bridge jokes worked well, as did the ad-libs.

First time director John Abraham, ably assisted by Nessa Law, are to be congratulated for this production, especially as they had so many last-minute changes to contend with.

I love matinees because you always get that child with the infectious giggle. You know the one – the giggler who turns your smile into a beam, then a chuckle. Childish giggles soon transformed into loud chuckles at the sight of the dame on her back, legs up, baring her Union Jack bloomers. The loud ‘farts’ from King Rat raised plenty of laughs amongst the children as well. I missed the traditional audience participation section and feel that the production would have benefitted from an ‘Oh, no he isn’t!’ or ‘He’s behind you!’ gag in Act One, rather than later in the show.

Congratulations to all involved with this production. It was such a shame that there weren’t more people in the audience to enjoy this entertaining show.