It’s always good to return to the glorious Hackney Empire and the staging of a Wagner opera in the building seemed to have attracted a number of first-time visitors who were stunned to see this beautiful theatre (although a little peeved that after being told the doors would open at 6pm they were kept outside till nearly 6.30). The production was from the Arcola Theatre and the Grimeborn Festival, which aims to widen the accessibility of opera and is seeking to complete the full Wagner Ring Cycle. At Hackney, the production was Die Walküre, the second of the four parts to this epic group of operas, having previously produced the first part, Das Rhinegold, at the Arcola Theatre two years ago.

Die Walküre continues the story, based on Norse mythology, and calls for a magic sword buried in a tree, fights with sword and spear, escapes on horseback, gods on mountaintops and a ring of perpetual fire. No surprise then that this production, presented for three days only, was not a literal one but an interpretation on a basic set and in vaguely modern dress. The cast of 9 were accompanied by the excellent 19-strong Orpheus Sinfonia conducted by Peter Selwyn, using the full depth of Hackney’s orchestra pit and more than up to any challenge thrown at them.

Of course, this opera is capable of presentation in a great many forms: this, after all, is the main source material for Bugs Bunny’s What’s Opera, Doc? considered by many to be the best animated short every made. Director Julia Burbach decided to set the opera in a large warehouse (according to the programme) but Bettina John’s design was very much a backstage setting with flight cases as rostra and various lengths of stage scaffolding as swords, spears, trees and mountains. Lighting designer Robert Price made the most of this basic set, particularly with his use of colour reflecting off the silvery scaffolding, although in the first act the emphasis on lighting from behind and the side meant that it was difficult to see the faces of the singers at times.

As a regular theatregoer but only occasional visitor to the opera, this production would seem to be aimed at me, since the company aims to welcome newcomers to the genre by performing the reduced version of Die Walküre originally created by Jonathan Dove and Graham Vick. The surtitles (Lydia French) helped greatly and gave only the minimum needed to follow the action, so that newbies were able to watch the stage as well. It was unfortunate that the Stage Left screen developed a fault in the first half, leaving many of the audience glued to the message on screen to Press Any Button to stop it closing down… all was resolved during the interval however.

Much of the action in the first part of the evening was set around the tale of the incestuous love of two twins, played by Finnur Bjarnason and Natasha Joul, both managing to surmount their drab costumes which left them in danger of fading into the background. Watching much of the action from a tallescope at fisrt, Mark Stone was a commanding presence even before he sang, and came to dominate the production (as his character does the plot) by the end of the evening.

The battle between Wotan and his rebellious daughter Brünnhilde (a spirited Laure Meloy in a red dress which seemed somehow less than god-like) enlivened the latter parts of the evening and provided the clear narrative drive which proved elusive earlier for newcomers to the Cycle. As the other Valkyries appeared, the mysterious black chains spotted on the set earlier were released, revealing three large swings. This raised the prospect of rampaging Valkyries swinging wildly out over the audience but in the event they just sat (and in one case stood) on the swings briefly and slowly moved to and fro.

It is a remarkable achievement at any time to mount a production of any of the Wagner Ring Cycle operas; to do so with 50% capacity limits at the present time deserves copious congratulations. The evening was not perhaps as accessible as I had hoped but was still a good introduction to this much-discussed but not often performed group of operas, and all involved were given a rapturous reception.

All photos: Alex Brenner (click an image for full size) 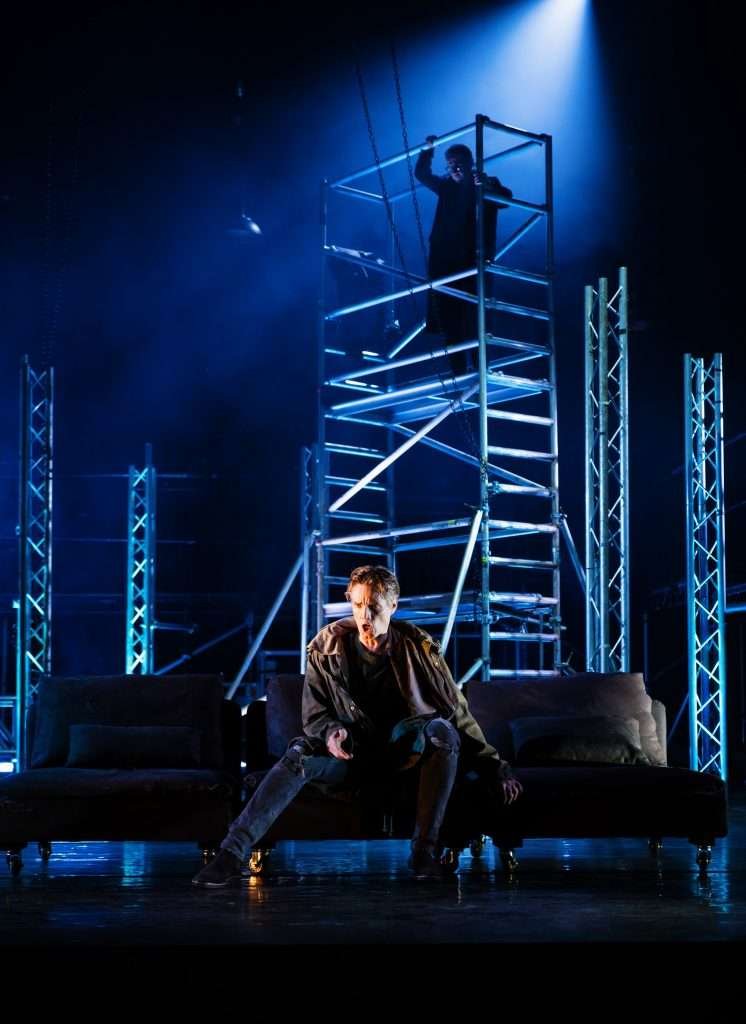 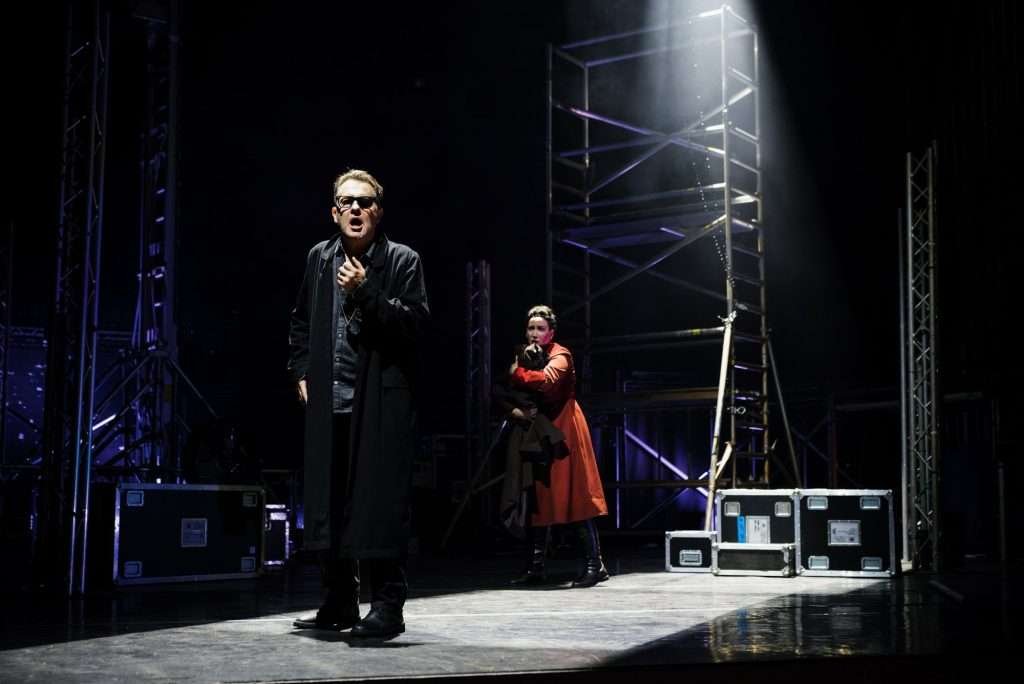 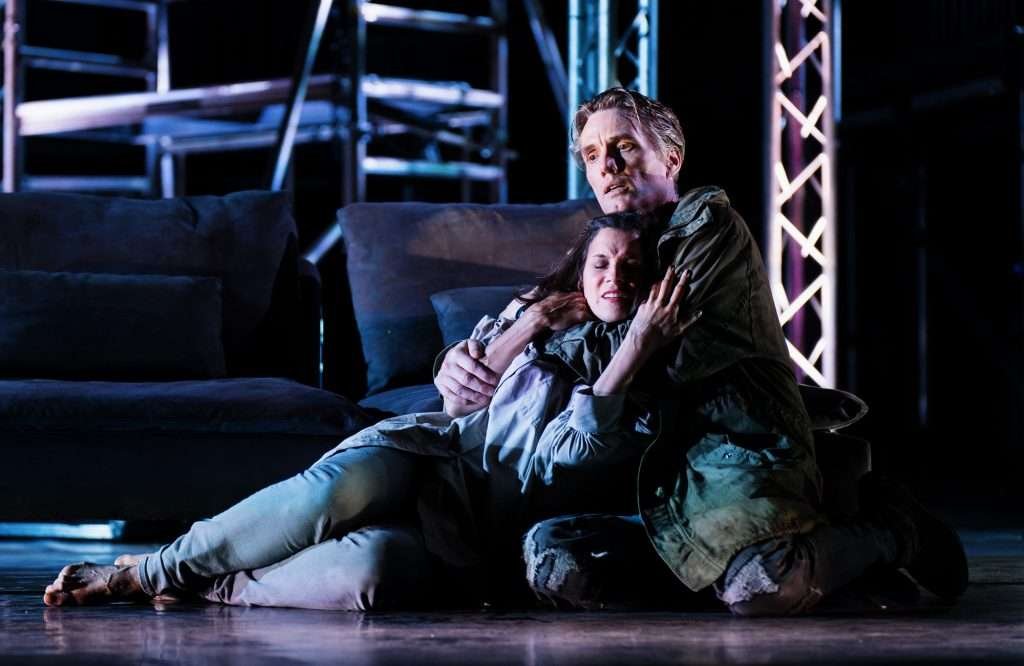 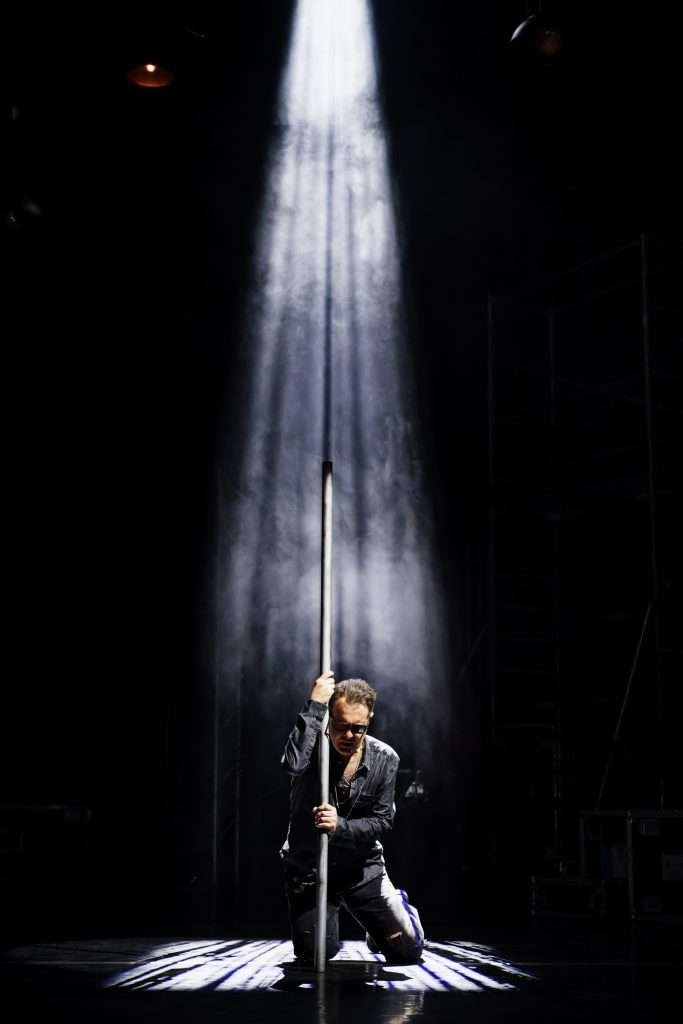