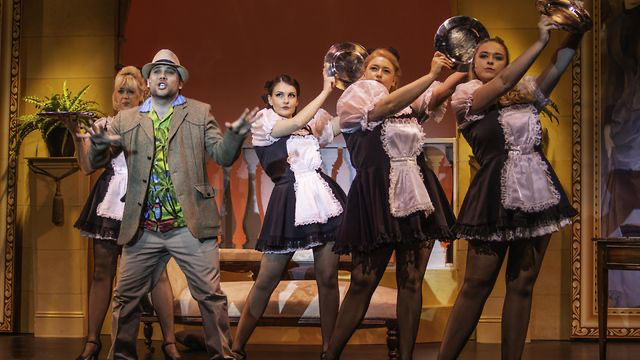 Credits: Music and lyrics by David Yazbek and a book by Jeffrey Lane

Right, let’s get this one straight right off the bat: This is a smash-hit show. There, I said it. No point in keeping you waiting, go buy a ticket. No, really; there is no need to read on – except perhaps to find out why…

As we clip-clopped our way along the pier to the Pavilion Theatre before the show I wondered if local amateur theatre group CSODS (Cromer & Sheringham Operatic & Dramatic Society) had bitten off more than they could chew taking on this wonderfully entertaining musical. Forgive me, but I did – but there was no need to worry…

The musical stage show is based on the 1988 film Dirty Rotten Scoundrels starring Michael Caine and Steve Martin, and tells the comic tale of two conmen working their way along the French Riviera.

In his CSODS show, director Martin Rodwell, has instigated a not inconsequential triumph creating a lavish and sumptuous feast of entertainment for a hugely appreciative sold out first night audience.

So much work has gone into this show and it, well… shows. The cast is uniformly magnificent (more on that shortly); the songs and dance sequences expertly designed and performed; the ever changing sets wonderful; the staging and artistic direction exemplary; the lighting and sound clear and apt; and the costumes extravagant; all this and a full live orchestra too, occupying their pit and expertly controlled and guided by musical director Mark Sharp. A genuine treat.

The remainder of the large cast all had much to offer and contributed wonderfully – and it was great to see Andreas Yiasimi (Nikos) garnering much laughter from very little in a late cameo.

I loved the occasional breaking of the third wall and the interaction with the orchestra, audience and even lighting technicians; and must admit to laughing quite hard at several points, so much so I made my elegant companion spill her sweets.

Overall it was a fantastic night’s entertainment – lively, funny, sexy, enjoyable, well-presented, entertaining, and so much fun!

So, should you go? Well, if the standing ovation and cheers were anything to go by… yes. Yes. And yes.