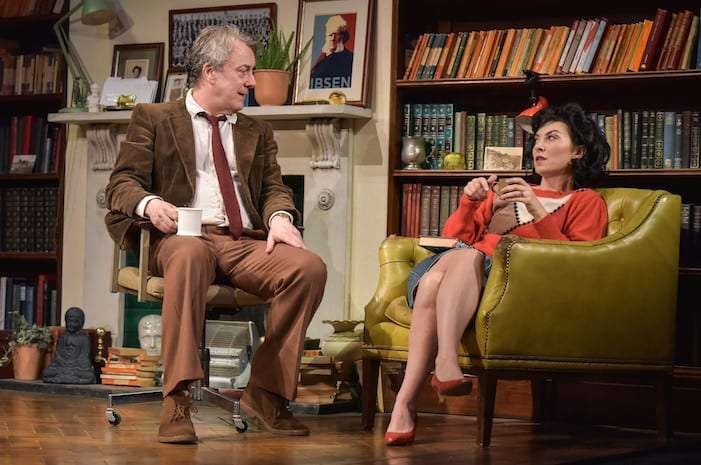 Credits: By Willy Russell. David Pugh presents a Theatre by the Lake production

Educating Rita celebrates its 40th birthday this year and it wears its years very lightly. This warm affirmative story about a chirpy hairdresser who wants “to know” and an older, disillusioned, hard-drinking university lecturer still makes pertinent point after point about discovery, individuality, friendship and the power of literature. He never tells Rita that Ezra Pound’s definition of intellectual was “having to know” but that’s what she epitomises.

If anything it’s better and tauter than ever in this abridged 90-minute, no-interval version. Of course the Open University doesn’t operate on weekly face-to-face tutorials and never did, as Willy Russell must know, but it’s a useful plot device and that minor inaccuracy doesn’t matter much.

Both actors adeptly catch the nuances of their developing characters so that nothing is exaggerated or stereotyped. Stephen Tompkinson, fumbles round the stage for his bottles, wearing a slightly too small corduroy jacket speaking in a plummy stentorian voice – showing us the good teacher he once was with his off-pat account of assonance and his definition of “critical”. Jessica Johnson’s Rita bounces colourfully around him being outrageous for the context but gradually becoming a woman with real choice and meeting Frank on his own terms. Their evident rapport as actors is a delight although Johnson’s rather odd high pitched accent (is it meant to be West Midlands or something else?) and her rapid delivery means that occasionally her words are lost.

This enjoyable Theatre by the Lake production, whose tour had to be aborted when the lockdown portcullis fell in March, had a good run at the Minack, Cornwall in August. Its week at the Rose, Kingston is the first stop on its new tour. Producer David Pugh is hoping it will help to reopen as many theatres as possible with socially distanced indoor performances – although given the news on the day of writing that another national lockdown may be imminent who knows?

The Rose has certainly got Covid security organised with temperature checks, queues outside and so on. They also insist on audience members remaining masked throughout although I had four empty seats either side of me, three in front and an aisle behind. This is the new normal and I try not to sigh too loudly. Let’s just be thankful that theatre is happening.