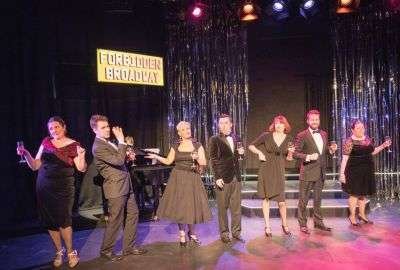 Director Matthew Westrip, Choreographer Amy Farlie and the cast, put on a brilliant show of Forbidden Broadway, with entertainment from the very first song to the last. The show excelled in its attention to detail, from the costuming, facial expressions and interaction with the audience nothing was missed.

The audience was transfixed with the amazing singing and comic timing of every member of the cast and the Director, Matthew Westrip’s interpretation was outstanding. Also appearing himself briefly as Carol Channing was a pleasant surprise and was perfectly performed.

Musical Director Matthew Hopton had a very busy night. I don’t think his hands left the keys of his piano once. Even joining in with the acting and expressions, he very much added to the humour of this show.

Daniel Lawrence, Andrew Overin and Andrew Roach, taking on the three male parts in this show, were brilliant. Their voices, at times singing some very difficult songs, were great. Andrew Roach was very versatile, one minute dressed as a cat crawling up to audience members, the next dressed a women for the part of Velma Turnblad.

Andrew Overin’s voice was mesmerising, hitting some of the high notes had the audience wishing he would carry on singing. Daniel Lawrence is just the perfect actor for this show, his comic timing and interaction with the audience was side-splitting.

Jo Davis, Rosalind Philp, Nadine Plater and Penny Walshe brought the four female roles to life. My personal highlight of the show was probably Nadine Plater as Annie. A 30 year old Annie, cigarette in hand, flipping the v-sign to the audience… simply hilarious. Rosalind Philp had excellent comic ability, her facial expressions and interaction with the audience was very entertaining, and I’m sure the member of the audience will even forgive her for spilling his drink on him! Penny Walshe had some excellent songs to sing and sung them perfectly. Her performance in the version of ‘Tradition’ from Fiddler on the Roof was exceptional. Jo Davis’ performance as Liza Minnelli was spot on. She has obviously put a lot of hard work into the characterisation, and after not performing for 8 years, it was a brilliant comeback.

The Broadway Studio Theatre made for a great venue, with tables and chairs laid out for the audience to watch the show in comfort. Although the show worked perfectly in the intimacy of a studio setting, with all the talent and high production levels it was worthy of Broadway sized audience.