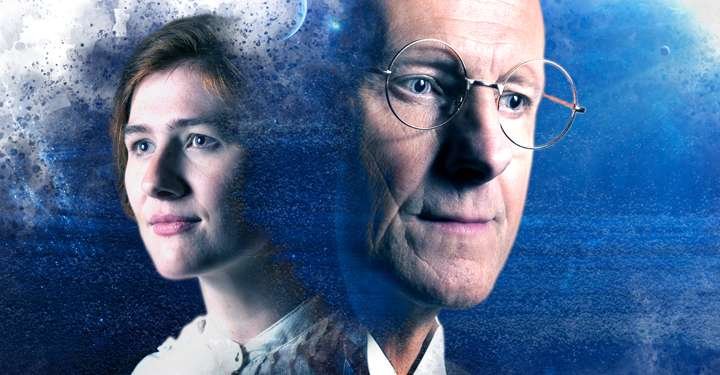 Show: Holst: The Music in the Spheres

Holst: The Music in the Spheres

It isn’t often that I see a new play running for two and a half hours which holds a hundred per cent of my attention from the first moment to the last, causes me to dab my eyes several times, gasp in wonder more than once and chuckle a lot. Holst: The Music in the Spheres did all of that. And more.

Cecilia Payne, who went on to be a pioneering astrophysicist was a student of Holst’s at St Paul’s Girls School where he tried unsuccessfully to persuade her to study music instead of science. Ross McGreggor explores that relationship and finds an ongoing link between Holst’s Planets Suite and Payne’s work on stars. The play I’m reviewing here is one of a pair. This one focuses on Holst. The other – Payne: The Stars are Fire – I hope to see in April.

The play provides, with lots of time shifts, Holst’s life story from his troubled childhood, his poor health, his friendship with Ralph Vaughan Williams, his marriage and, of course, the music he was writing although for many years he also had to teach to pay the bills. Although he was born and grew up in Cheltenham his Germanic name inevitably caused problems in the second decade of the 20th century. The best scenes are the ones set in his studio at St Paul’s School where McGreggor imagines that Payne (Laurel Marks – a very intelligent performance) spends so many detention periods that these two lonely people become quasi friends rather than teacher and pupil. When his eyes are bad she morphs into his amanuensis, for example.

Toby Wynn-Davies is totally convincing as Holst – shivering with misery as a sickly, misunderstood child, diffidently courting Cornelia Baumann’s Isobel Harrison (good), weeping with joy as he conducts Jupiter or fretting about money and struggling with self confidence. It’s very nuanced acting. Even the piano playing at his desk works.

Edward Spence makes Ralph Vaughan Williams into a witty joker as well as a very supportive friend and Lucy Ioannou shows impressive versatility in switching between the prunes-and-prisms high mistress of St Pauls and Holst’s kind, down to earth aunt. Also strong is Alex Stevens as Holst’s stentorian, authoritarian father, and as Sydney Bressey a member of Holst’s orchestra at Morley College, killed in the war.

There’s a lot of music in this show and several times we get a surreal ballet ensemble sequence such as the one in the first act when Holst’s inner turmoil is evoked by projection on the back screen, Mars driving along in its relentless 5|4 rhythm on the sound track while a tableau evolves from the whole cast moving a table. I also loved the scene in which Holst conducts and the rest of the cast becomes his orchestra – miming cellos, timps, trombones and so on as they become prominent in the music. It’s excitingly ingenious movement direction by Will Pinchin.

It’s a meaty, intelligent play with some good  jokes for educated grown ups although it’s never abstruse. I loved the crack about using a clarinet for a death, for example. “No, no” says Vaughan Williams. “Death is always an oboe.” And as a former Swale resident of course I enjoyed the Sheppey joke – I had no idea, though, until now, that Holst ever lived there.

I saw the final performance of this play at the Brockley Jack because the performance I was due to see earlier in the run was cancelled. The good news is that both plays are having another run – at  New Theatre Wimbledon 11-24 April. Catch it then if you possibly can.