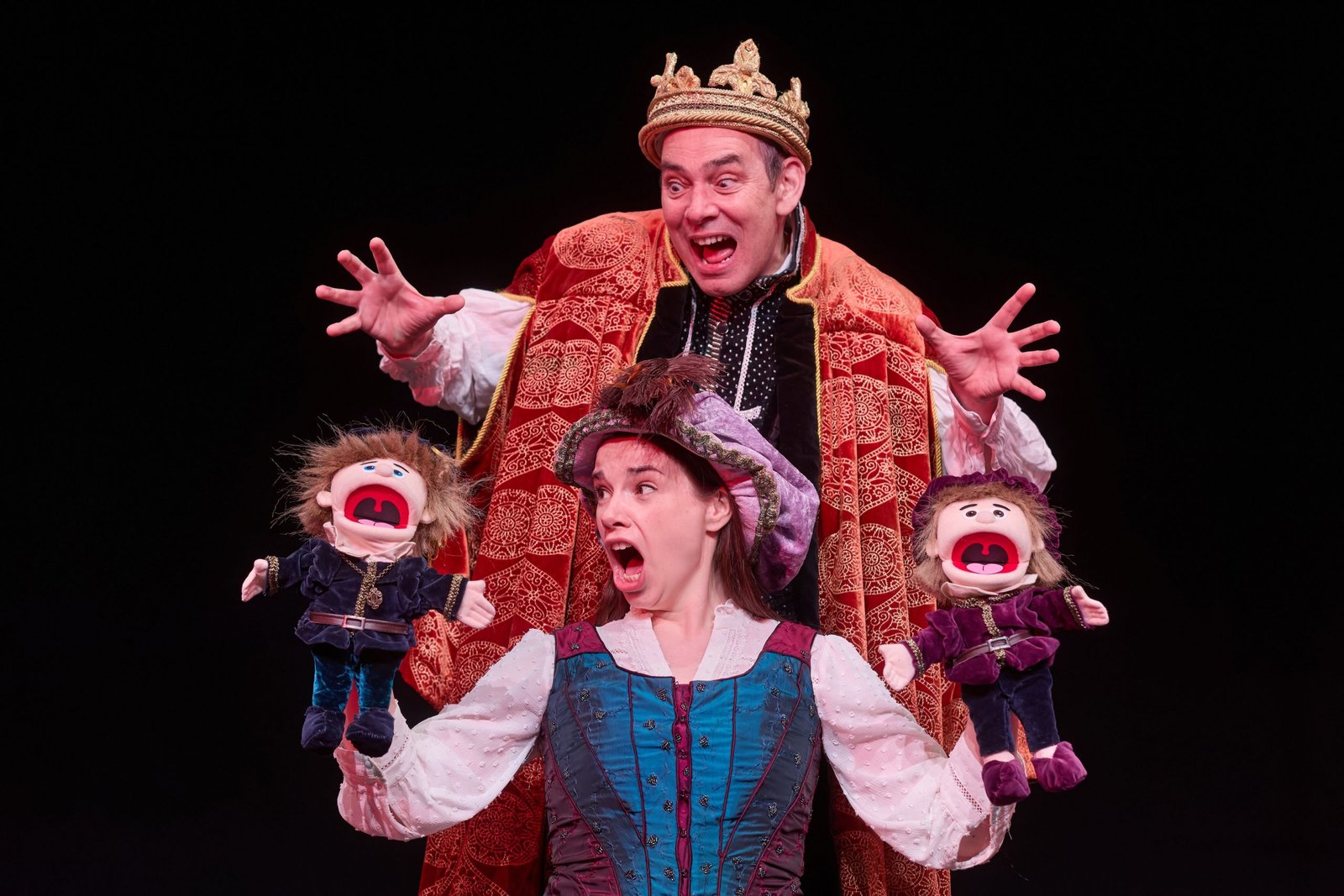 Credits: Produced by Birmingham Stage Company. Based on the books by Terry Deary. 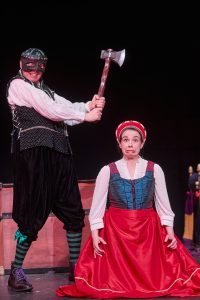 With Six already presenting one take on Tudor history in the West End, a second version can now be seen at the Garrick with Terrible Tudors. Horrible Histories was familiar to me only from bookshops before this performance, but I can totally understand the attraction. Apart from anything else, the mixture of real history with jokes and sarcastic hindsight was very much part of 1066 and All That, a book that was a very important part of my youthful reading.

I would certainly have enjoyed Terrible Tudors if it had been around then. With two versatile actors, piles of colourful costumes for quick changes, and an enthusiastic and well-primed audience, this was unlikely to go wrong, and indeed it was something of a triumph, particularly with such a wide range of ages in the audience. This was very much a family performance and in most cases this was to be celebrated; however I did feel sorry for the two small children behind me who could get no response from their mother as she spent the whole performance tapping away on her phone.

The occasional badly-behaved parent was no obstacle to these two performers however. Ben Martin portrayed not just the expected Henry VIII but a great many other royal personages and many of their subjects. He did so with skill, charm and just the right amount of asides or eye contact for the adults. Very much in the role of his foil, though more than holding her own, Emma Swan graduated from various citizens to playing most of the wives of Henry VIII and Elizabeth I with deft characterisation. All the other characters were played by puppets, or disembodied but well-timed offstage voices.

Neal Foster’s production for Birmingham Stage Company of the script by himself and Terry Deary made good use of recorded music and sound effects, and this made the stage feel more populated than it actually was. Costumes by Jacqueline Trousdale were highly effective and matched the aesthetic of the cartoon drawings by Martin Brown in the books (and in the excellent and reasonably priced programme and activity booklet). The set was minimal and it was unfortunate that the performance played out in front of the grey screens that form part of The Drifters set for the evening show. Despite enthusiastic use of coloured lighting, this still made a drab backing; it was a shame that there was not at least a cut-out screen or two painted to match the colourful style of the books.

It was good to see the avoidance of cliché, and willingness to acknowledge other sides to national figures, such as the involvement in slavery of Elizabeth and Francis Drake. For the most part, however, this was a glorious romp through a lively historical period which owed a lot to panto (did Richard III kill the princes? Oh yes he did, oh no he didn’t etc) and even more to the considerable skills of the two performers. We even got the traditional sing-along with actions, and the contest between the two sides of the theatre to see who could sing loudest (and not ending in a tie for once, as the stage right crowd were considerably louder), as well as the entire audience at one point brandishing imaginary flaming torches.

It’s a surefire success for families who have enjoyed the books, and many will also want to enjoy the other Horrible Histories performance on a boat along the Thames this summer (although it was a bit tacky to advertise that in the script of this show). And I learnt some history too.