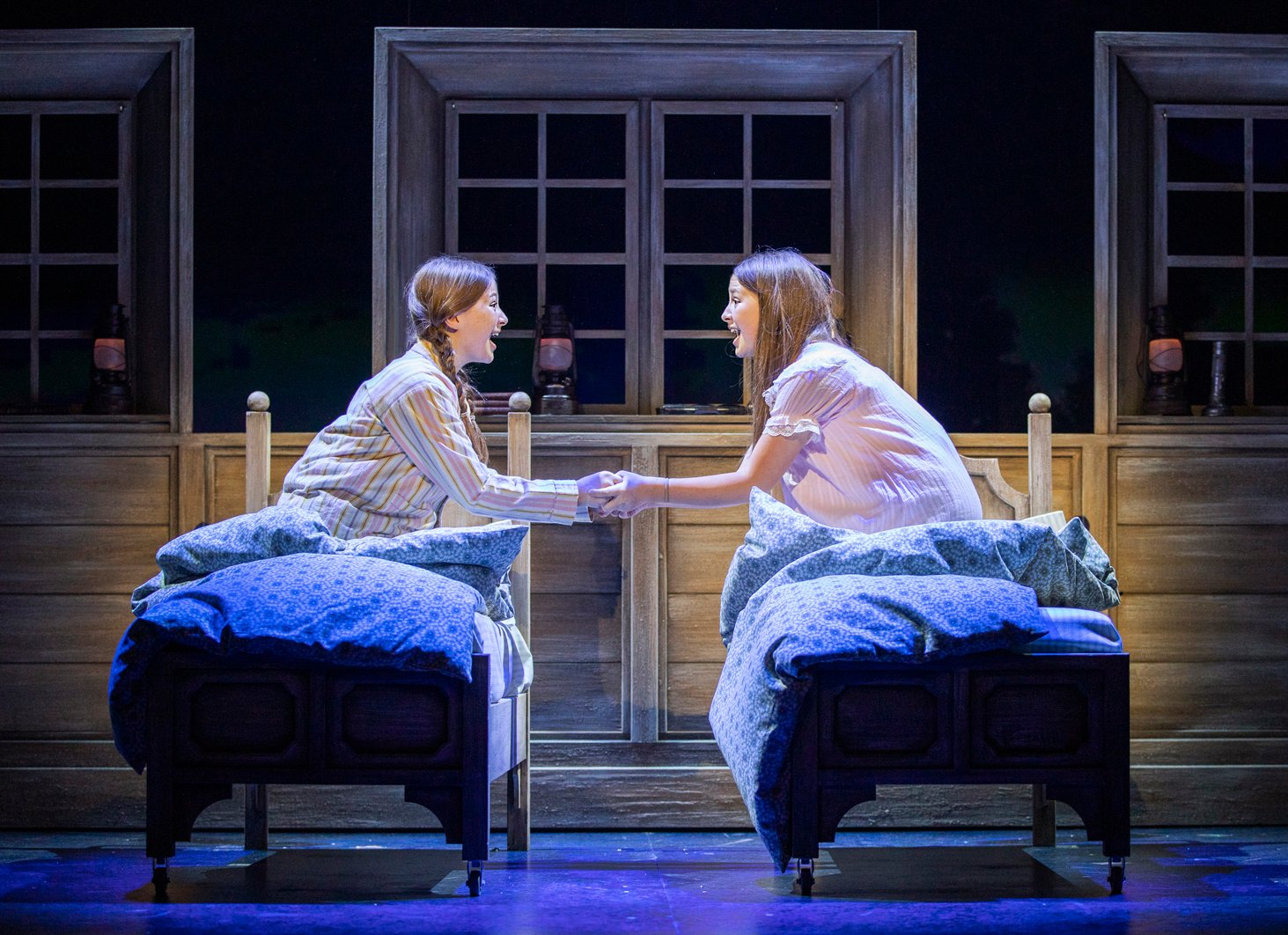 Credits: Based on the novel THE PARENT TRAP by Erich Kästner. Presented by Nottingham Playhouse and Kenny Wax Ltd

This is a  show which ladles on the sentimentality with much enthusiasm.  But that is unlikely to stop the public liking it and I think Kenny Wax will probably have (yet another) hit on his hands – not least because, like Matilda the Musical, it has the ticket selling advantage of being about, and suitable for, children but equally likely to appeal to adults who like jolly music, tunes, earworms and happy endings.

Identical is based on Erich Kastner’s 1949 novel, The Parent Trap. Stuart Paterson’s book leaves it firmly in period and set in the German and Austrian world of the novel. Identical twins Lottie and Lisa were separated in infancy and brought up by their divorced parents. Neither knows of the other’s existence until, by chance, they meet at summer camp. They agree to swap lives so that each can get to know the unknown parent and to keep in touch by telephone. Eventually, and inevitably in a piece of this sort,  nearly three hours minutes and a lot of songs later, they manage to reunite their parents. It’s an implausible outcome but you suspend your disbelief fairly willingly and leave the theatre feeling warmed,

Emily Tierney sings beautifully – a quality of silvery wistfulness – as Lisalotte, the twins’ mother. James Darch is convincing as their musician father and there’s a good scene when he conducts his Hansel and Gretel ballet in Vienna. Also noteworthy in a large, pretty strong cast are Louise Gold as Roza, the nicely characterised housekeeper and Gabrielle Lewis-Dodson as the glitzy but tough ballerina whom the twins’ father almost marries.

Children’s casting director, Jo Hawes, has done well to cast three alternating sets of talented identical twins (and a well drilled young ensemble for the early scenes). This feat has made for arresting publicity although, in practical terms, it’s obviously unlikely that she’ll be able to do this repeatedly if this show takes off as I suspect it will. Actually, you could carry it off quite successfully with two girls who look broadly similar and are made up to highlight the likeness. At the performance I saw, Eden and Emme Patrick gave us flair, energy and feistiness aplenty. There is also impressive duet work with adults.

Between them Robert Jones as set designer and Douglas O’Connell as video designer have come up with delightful sets. Via projection we move seamlessly between the streets of Munich and Vienna, interiors of houses, summer rural vistas, a station, an airport and much more. Meanwhile set items such as tables are moved slickly on and off or flown in. It’s all very neat and unobtrusively expressive.

George Stiles produces many a catchy tune but Tom Curran’s imaginative orchestration is what makes the music memorable. And it’s all in fine hands under musical director,Tamara Saringer and her excellent nine piece band working hard in the pit.

Perhaps we need an occasional,  unashamedly populist show to cut through the tuneless intensity and darkness of most 21st Century musicals?