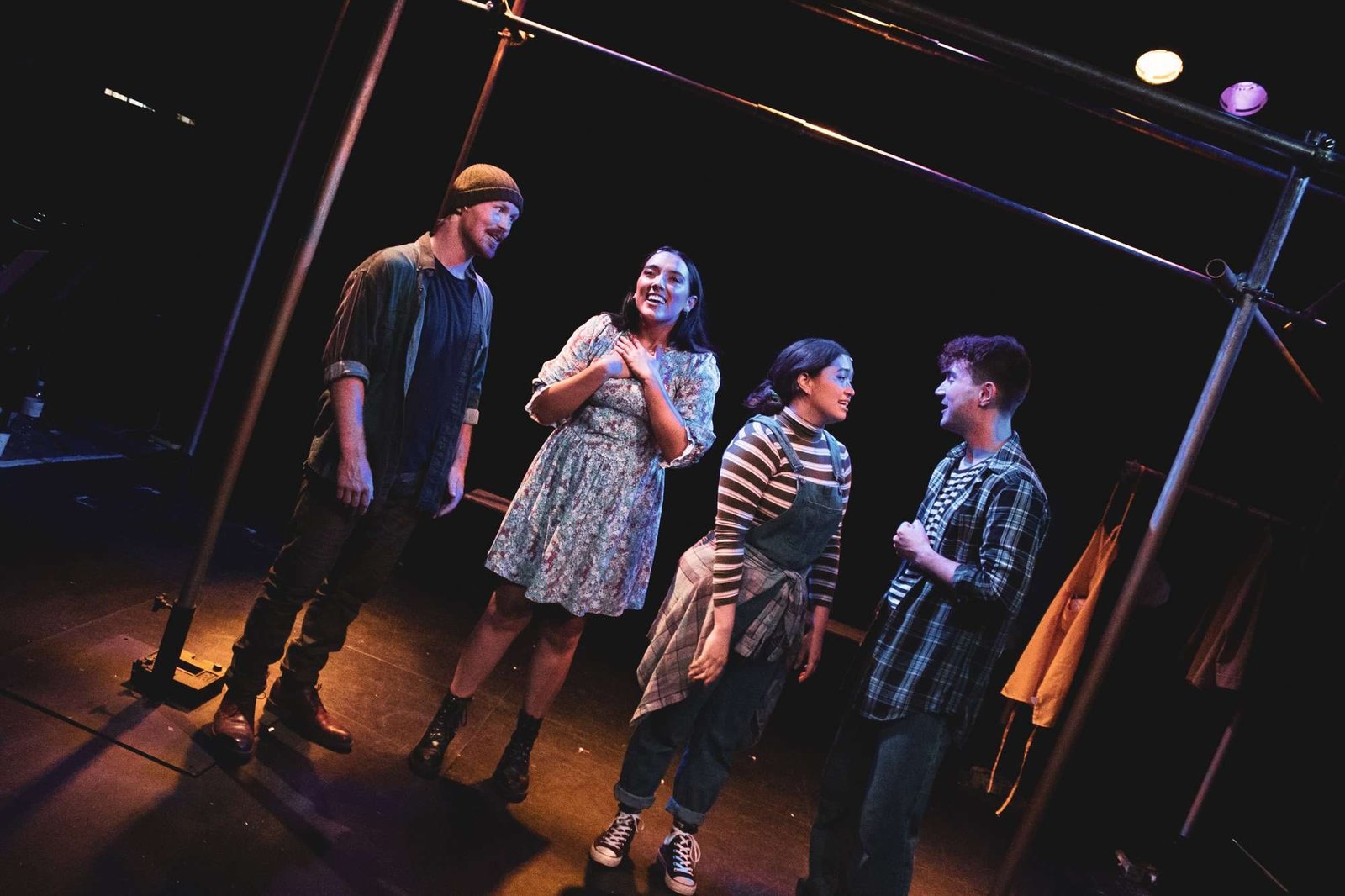 If all theatre is subject to difficulties at the moment, which it is, then the production of From Here at Chiswick Playhouse has had more than its fair share of travails. Written over Zoom, the show had to be rehearsed under strict Covid-secure protocols leading to a delay in the opening; and then the extension of capacity limits on theatres meant a reduction to 40 in the audience, requiring difficult decisions about whether it was viable for it to go ahead. As the Press Night approached, the lighting operator had to self-isolate, so the producer took on that role; and on the day itself two of the four cast members also had to self-isolate so the writers of the show took on their roles with one day’s rehearsal. And then the audience had to cope with the sudden Biblical deluge that hit West London that afternoon and left many with a very long and complicated journey home.

After all that, to put on any level of show would be an achievement; to have presented what turned out to be a well-performed and interesting new British musical was extremely impressive. Chiswick Playhouse has a gift for discovering new talent, and those involved in this show, all trained at one of the Guildford schools, have put their talents to good use. From Here has music and lyrics by Ben Barrow and Lucy Ireland (also playing Person 2 and Person 4 on this occasion). With an excellent three piece band (guitar, cello and keyboards) led by MD Ian Oakley and a cast who know how to put over a song, they were well-placed to launch a show which deserves a future life.

There is no book as such although there are a few verse interludes – these didn’t quite gel with the rest of the evening, although well-delivered, and it was difficult to discern any particular narrative apart from a reflection on growing older (or maybe they were just extra song lyrics not yet set to music). It took a while for the audience to realise the four actors were playing a variety of characters and these were not really identifiable enough outside their own songs. The programme calls the piece a song-cycle and that is probably how it is best described rather than as a conventional piece of music theatre. It was only really in the first version of My New Best Friend and in the English Teacher’s Soliloquy that characterisation was exaggerated enough to be recognisable within a single lyric.

Direction by Annabelle Hollingdale kept the piece (and performers) moving at all times although little use was made of the minimal set. The stools and benches deftly rearranged by the cast were really all that was needed – perhaps with key costume elements to sketch in a new character rather than a complete realistic costume change. There were some nice sections of movement too, especially in the occasional company song, and the pace was kept up throughout the running time of just over an hour.

The music was impressive: always at the service of the lyrics and suited to the character, and well played at a volume that enabled all the words to come over clearly. It was good that this was the case as this was a rare example of a new musical without clunky rhymes or forced lyrics: songs to listen to, in which every word could be heard.

Stepping into two of the roles, Ben Barrow and Lucy Ireland showed they are more than competent performers as well as writers, and if no announcement had been made, it is unlikely most of the audience would have known they were not intended to play the roles. As Person 3, Andrew Patrick-Walker was perhaps the most successful at instantly creating a character, although at times his powerful singing voice was too much for such a small venue. Grace Mouat, last seen by this reviewer in the misguided Disenchanted, is much more at home here. She is a confident performer who instantly engages with the audience and is adept at selling the story in a song.

Some of the songs could well work as stand-alones, including Recipe for the Perfect Start, English Teacher Soliloquy and Love a Little More. That mythical beast, the great new British Musical, then? Well, not quite; a little more narrative would have helped and perhaps a little more light and shade in the songs, but Barrow and Ireland are a couple to watch, and it is thanks to venues like Chiswick Playhouse that they will, let us hope, be able develop their craft in years to come.