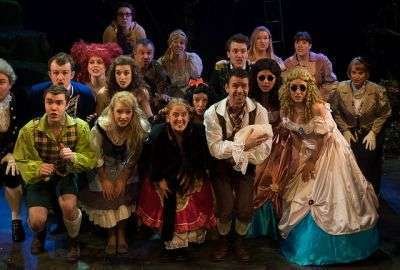 Show: Into the Woods

Marketing material for SEDOS refers to “The City of London’s premier amateur theatre company”.  A bold statement perhaps, but one that is given credibility by the glowing reviews posted on their website. Having previously performed a number of Sondheim shows, how would their reputation hold up against arguably his best known and most accessible musical, the twisted take on fairy tales that is Into the Woods?

Into the Woods is a true ensemble piece and while some parts are clearly larger, it is difficult to say which one of them is “the lead”. A number of the roles have the potential to steal the show and opinions as to which one has done it will be entirely subjective.  In the same way, the ensemble cast cannot afford to have a weak link as that one person would have the potential to let the whole piece down with a poor performance.  So, the production presents a big challenge for an amateur company, even a premier one.

Moving into the auditorium, I was struck by how small and cramped the set was – three simple representations of the homes of the show’s three main family groups.  How on earth was this the stuff of fairy tale? I needn’t have worried. Having established the characters, the set swung out to reveal the eerie splendour of the woods – a multi-levelled set with subtle lighting which made fantastic use of the performance space. The whole production was visually stunning with perfectly fitting costumes for every cast member – whether they were playing the Witch or a harp! – an attention to detail that was echoed in the outstanding production photography and publicity material.

Although this show is long, running at just over three hours including an interval, Director Matthew Gould gave us a production that had a good pace, plenty of humour, some original touches and a brooding sense of menace lurking in the woods. His narrator, played by a delightfully perky Fran Rafferty, was fully involved in the action rather than stuck on the sidelines, drawing the audience into the story from the start.  Gould made great use of the stage, leading to a couple of heart in mouth moments when cast members ran down his uneven hills. In heels. Oh and singing. Sondheim! SINGING SONDHEIM!!!

The music was under the direction of Ryan Macaulay who treated us to a full 15 piece orchestration. They played behind the set with monitors to help the actors with their cues.  Without that direct eye contact with the cast, it is a credit to his work that every performer was perfectly in time and the majority of the cast had excellent diction, with very few of the fabulous lyrics lost in those tricky rhythms. Particular highlights came in the second act, with a snappy and clear rendition of the ‘Your Fault’ quintet and building to a finale that produced the sort of harmonies from the entire cast that give you goosebumps.

Having said that the show succeeds or fails based on the strength of the whole team, rather than individual performances, this show is certainly a success. The cast does not have a weak link, so any criticism is minor and in relation to the exceptionally high standards of the production as a whole. Each actor gives an outstanding individual performance but the sense of the cast working as a team is never lost.

It almost seems unfair to pick out individuals but my personal favourites included Amanda Stewart’s Cinderella – a beautiful singing voice, effortlessly controlled and matched with a quirky characterisation that managed to both embrace and poke fun at the twee Disney princess that the character brings to mind.  I also loved Jack, played by Chris McGuigan. This simple lad never ventured into village idiot territory, with some powerful vocals on display as he played his key part in moving the plot along.  In the supporting role of his mother, Susan Booth also impressed, showing some excellent comic timing and managing to make a relatively small part stand out.

I also enjoyed the two princes, they bounced off each other perfectly in their angst-ridden duet, ‘Agony’, although they maybe lacked a little “bite” in their other roles as wolves. Little Red Riding Hood was played by Lotte Gilmore in the style that at times reminded me of Bubble from Ab Fab! – with a northern accent that only ventured south a couple of times during the performance – she particularly impressed me with the energy that she brought to the role, having to keep up her slightly manic (but very entertaining) portrayal throughout, which she did to great effect.

At the heart of the show are the Baker and his wife. These are probably the most difficult parts to play, as they don’t have a familiar fairy tale backstory to establish them.  Andrew Overin did a great job as the hen-pecked Baker. It took Kara McLean a little longer to warm up but she really came into her own in the second act, with an excellently performed ‘Any Moment’ with Cinderella’s Prince.

In the fabulous role of the Witch, Emily Sidonie Grossman gave a powerful and heart-breaking rendition of the Witch’s Lament, although I felt she needed a little more conviction in some of her dialogue, lacking the confidence and charisma that came through in her confident attack on the musical numbers.

Although I have not mentioned other cast members by name, they should all be congratulated on their exceptional standards of singing and characterisation – truly impressive performances all round.

I would thoroughly recommend Into the Woods to anybody who loves Sondheim, who loves theatre or who just loves a good story. SEDOS certainly lived up to their premier status with a production that leads you on a fabulous journey down a twisted path to a breathtaking conclusion.