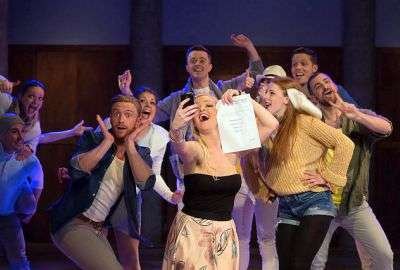 Mr Sardines and I always agree when reviewing – we look for creative production, a high standard of performing and a generally polished show. Our expectations often cause consternation as people wail ‘but we’re amateurs…’. SEDOS represents everything an amateur society should be and we can unanimously say this is the best amateur musical we have seen. Ever. (And we’ve seen rather a lot…)

Everything was spot on. Definitely the most successful screen to stage transfer, a well-written show can still be massacred. Not with this uber-talented bunch, of which I must add, we did not recognise one person! Our first gripe – societies that constantly wheel out their oldest members, because it’s habit. This cast was chosen for their talent and there was not one weak link. A claim not many shows can boast. Membership of a society should not guarantee stage presence, unless perfect for that part. The actors personified their roles perfectly. It is a tough job fulfilling a role that has been immortalised onscreen. It is a careful balance of taking on that character’s personality whilst not just copying the actor that played them. There was also a good number onstage. A West End sized cast that filled the stage but not a cast of fifty, trudging on and off, delaying the action.

Having a quick chat with the producer Lizzie Drapper, we were amazed to find out that Thomas Leonard and Kimberley Barker’s choreography was all original (neither Mr Sardines or I caught the West End show, so had no comparison). Poor choreography is something else we see too much of. These guys knew their cast, knew what they wanted to achieve visually and created an absolute gem. Without giving anything away in case you are one of the lucky ones to have tickets, their homage to Michael Flatley was worth the ticket price alone. Outstanding.

Effective theatre is all about timing and understanding your role. These guys are so slick, you feel bad calling them amateur. They don’t hide the fact they aim to be as professional as possible, and they always deliver. But they have a mighty good time too. Yes, it should be enjoyable, but you should want to be the best too. Obviously this show is all about Elle (Laura Bird) and the dogs (of course) but everyone formed an important cog in the Legally wheel that made it the success it was.

Costumes – expertly handled under David Walker-Smith. It frustrates me when costumes are skimped on or not appropriate. What a range we saw – even an Our House type quick change cleverly handled. Everyone’s costumes were fantastic – every shade of pink for Elle, the preppy rich kids, the acres of spandex. The thought that went into it produced a co-ordinated, and yet again slick, ensemble. It was the little things – the Greek chorus’ costumes white replicas of their ‘living’ ones was especially effective.

Another triumph was the use of the revolve. It meant seamless scene changes and kept the show moving along at a great pace. There was not one moment that your attention flagged or you urged the action to move along. Not forgetting the fact that this was an electric revolve installed in an old swimming pool, Robert J Stanex created a deceptively simple set. It relied on those timings again. Cast members wheeling furniture on and off without any break in proceedings, clever and inventive use of freestanding doors and blocks.

A large and talented orchestra, hidden around the mezzanine, the live music added to the atmosphere as again you felt they were enjoying themselves. Sometimes you get the impression musicians are just going through the motions, but these guys put as much energy in as they could.

I enjoyed the show – can you tell?! This production of Legally Blonde could be used as lesson in how to get it right. I would urge you to get a ticket, but it’s been sold out for months and deservedly so. If you are one of the lucky ones, you are in for a real treat. If you haven’t – beg, borrow or steal or get in there quick for the show that inspired Sardines magazine‘s name – Noises Off in October – another show that’s hard to get right but my money’s on SEDOS giving us another belter.