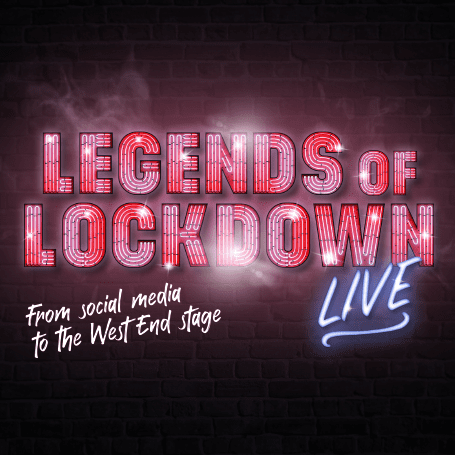 “On my authority, the West End is back open”, called Jackie Weaver from the safety of her infamous living room. It was obvious that the audience was more than thrilled to be back in the red velvet seats, and were ready for an evening of laughs and entertainment.

Legends of Lockdown Live celebrated the comedians, dancers, entertainers, and just everyday people, whose talents led them to go viral throughout the lockdown. With a mixture of seasoned performers and first-timers, the evening was a liquorice allsorts of laughter, reminiscing, satire, and a reminder of the frankly diabolical way our government treated performers, creatives and production throughout the pandemic.

Production-wise, the entire event wasn’t quite up to scratch of what you’d expect on a West End stage, but it didn’t hinder the performances or the overall atmosphere. Using a screen to show the viral videos, the quality wasn’t quite good enough for those further back to see clearly, but it was perfectly fine to introduce each act.

The evening was hosted by Kerry Boyne & Sooz Kempner, who took a while to warm up and get into the swing of things. There were a few awkward moments and the pair used cue cards to spin-off jokes which felt a bit too amateur for a West End stage/ Sooz, who was evidently the more experienced of the two, filled the gaps with a few tongue in cheek jokes and quips.

Professional dancer Austyn Farrell, or should we call him Quarantina Turner, kicked off the show with a rousing performance of From Now On from The Greatest Showman, and Proud Mary. His skill and passion shone through, and we were having fun because we could tell he was having an absolute blast. He told the audience of how his TikTok videos came about (it all started on the toilet, as all the best ideas do), and how his neighbours came together to support and help facilitate his infamous videos.

Comedians Naomi Cooper (Phillipa) and Rosie Holt (The Woman) took to the stage in their personas, both delivering strong performances and keeping us engaged throughout their sets. Both performers touched upon experiences of lockdown and came across as complete naturals on the stage.

Stepping, or tapping, his way on to the West End stage for the first time, was 8-year-old Rufus and his mum Lizzie. Having taught him to tap dance throughout lockdown thanks to the gift of time, Rufus really came to life as soon as he realised the audience were completely on his side and rooting for him.

Mufseen Miah & Spencer Cooper brought some inspiration to the room by talking about how they came together to create the Queer Talk Podcast, with the aim of uniting the LGBTQ+ community at a time where bars, theatres, and clubs, places where LGBTQ+ people can often go to meet each other, were closed.

“Everyone has a voice, and social media is the perfect place to use it”, was the advice offered up by Joe Carter, TikTok comedian with 1.7 million followers. He went viral for impersonating his dad and making funny videos from his university halls throughout the pandemic. He was incredibly likeable and personable, however, there were some awkward pauses between host Kerry and himself.

Sean Clarke, also of TikTok fame, was one of the most polished acts of the evening. Having not performed since pre-lockdown, he settled straight back into his dry one-liners, giving us laughs after laughs about being cancelled, the vaccine menu, and office chairs.

Sooz Kember was unmistakably Liza in her excellent impression, showcasing her fantastic range and stage presence.

The highlights of the evening came from seasoned performers Rob Madge and Oscar Conlon-Murray. Both offered up parodies of famous musical songs incorporating political satire, the importance of supporting the arts, and in Rob’s case, being an irritating child actor. It’s a shame both performers didn’t have live accompaniment, which would’ve made their numbers all the more impactful.

Overall it was an enjoyable evening with a few technical hiccups and slow burners, but it was an interesting concept and fantastic to see the performers getting to do their thing in real life. People often take content creators for granted and don’t realise the time and effort that go into creating these viral videos.

We’re very lucky to live in a day and age where entertainment is so accessible, to both creators and the audience, and this showcase celebrates exactly that.