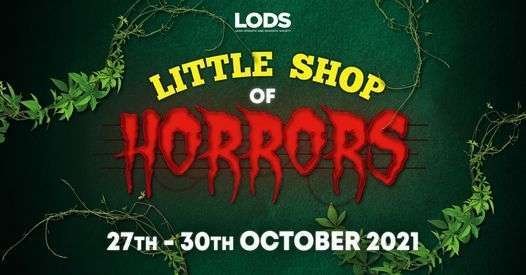 There is Something Nasty in the Florist Shop

How nice it is to see an audience enjoying being in the theatre again, abandoning themselves totally to Little Shop of Horrors performed by Leigh Operatic (LODS) at the Palace Theatre, Southend.

The rock musical, which is a gothic horror, comedy, based on a 1960 Roger Corman B-movie, is about a humble flower shop assistant who unknowingly cultivates a homicidal plant. It has been performed in the West End and locally in Southend several times since its conception off Broadway in 1982.  However, although I’m a musical theatre fan, I’ve never seen it before.  I suppose the thought of a flesh eating plant, seems a strange thing for a musical, even if it is written by the great composing team, Alan Menken and Howard Ashman.  As a result I was unsure what I was about to see, but I was most impressed.

The cast consisting of mainly young singers attacked their parts with a lot of verve, and energy. The show beginning with a Doo Wop trio named Crystal (Gemma Lloyd) Chiffon (Rebecca Wallace) and even a Ronnie (Declan Wright) all names relating to sixties pop groups with a touch of the Shangri Las.  They narrate the tale in song, with lots of be bopping and shoop shooping that keeps the story rolling along.

Nerdy Seymour, is played brilliantly by James Cohen, as the florist who accidentally cultivates the plant that feeds on human blood and flesh.  Although, this sounds gruesome, it provides a chance for a great, rock bluesy number when the plant , now called Audrey II after the young lady that Seymour loves, sings Feed Me (Git It).  The voice owned by Tilly Tait, who is never seen, but is hidden by a huge plant monstrosity with a gaping mouth, blasts out the song.

Also, dominating the stage is Reanne Nash as Seymour’s love interest, Audrey, who struts her stuff around.  She has a remarkable voice that can be strident as well as tender in her scenes with the adoring Seymour.  Meanwhile, she is in an abusive relationship with a sadistic dentist called Orin (Tom Johnson) who hams it up for all he’s worth like a demented Meatloaf.

I particularly enjoyed the pastiche numbers,  Mushnik & Son – a touch of Fiddler on the Roof here, by Peter Brown, and the patter song Now It’s Just the Gas by James Cohen and Tom Johnson.

All the music is in the style of early 1960s with many cultural references and plays on words e.g., Leader of the Plaque by the dentist.  The show includes several well-known tunes, including the title song, Skid Row (Downtown) Somewhere That’s Green, and Suddenly, Seymour.

As the plant grows, it spreads out tentacles, and branches.  The use of girls in green and purple to indicate this was very effective, although they could have moved more sinuously around the stage, to indicate the growing tendrils.

Although the musical is comedy horror and the story far-fetched, it also has tenderness and a reality about it. Its characters enter into abusive relationships because they’ve never experienced any other kind. Audrey believes that she doesn’t deserve to be loved.  By the time they find each other, Seymour has become a reluctant psychopath, chopping up bodies to feed his plant, and Audrey can’t imagine herself as anything other than a victim.

The musical’s ending, which veers from comedy to tragedy doesn’t really work, but that is a fault of the writing. Everyone ends up eaten by Audrey II who aims for world domination. However, it is great fun and the singing is of a high professional standard. The audience loves every minute, cheering, and clapping with the songs. There was even a standing ovation from the packed house.

Let’s hope that the theatres are now back in business, and LODS continues the rest of the week as it began, with a successful, barnstorming show.