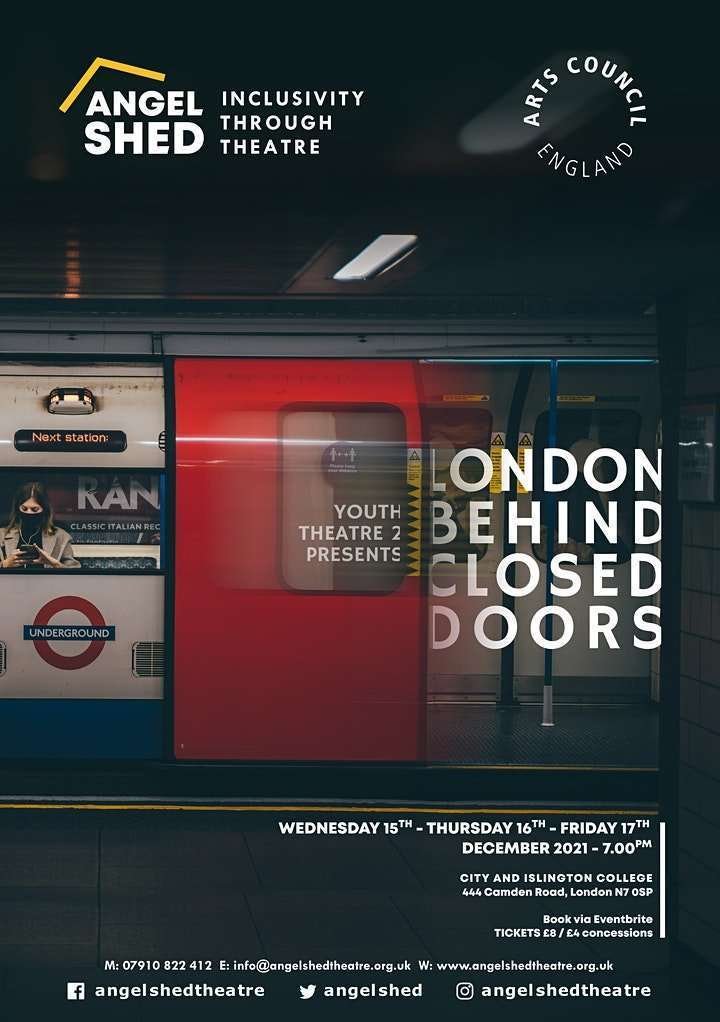 I was not aware of Angel Shed Theatre Company before this visit, but I will certainly look forward to seeing more of their work in future. It’s always good to see young people developing their performance skills, whether that be through taking part in an adult-directed school play or in something more small-scale and where they can have much more input. It’s unusual, however, to find a group where the young people involved are able to develop their skills in writing and directing as well as performing, as is the case with London Behind Closed Doors.

The performance was by Angel Shed’s Youth Theatre 2, who are aged 13 to 19; Angel Shed work with four different age-based groups as well as Music and Dance companies. Due to the pandemic, the work has been developed over a long period of well over a year. Short pieces involving small numbers of young people were topped and tailed by ensemble sections that tied the evening together.

This inclusive and diverse group of 16 young people presented a range of aspects of London life as they experience it: on the bus, in the street and at eating places. Using the performance space at City and Islington College meant that the audience could see well and the cast had the benefit of good lighting and sound to support their work. I very much enjoyed learning about these young people’s lives and their perceptions of how other people live theirs.

If there was an undertone to the evening it was a slightly offbeat one that seemed to sit well with the cast and indicated their involvement with, and control over, the material. Some of the performers had a quiet but reassuring stage presence which focussed attention on what they were saying; others achieved their effects through movement or by dialogue.

The cast were well rehearsed and mostly coped well with the difficulties of voice projection in a large space. There were occasionally signs of not being sure how to end a section, but that is the eternal problem for writers of sketch format pieces. The beginning and end pieces with the whole group worked very well, with the bus sketch getting its effect through strong characterisation and well-judged movement. The Q&A with the cast, expertly facilitated, rounded off the evening well and indicated the extent to which the cast had benefitted from the experience.

Angel Shed’s strapline is Inclusivity Through Theatre, and their inclusivity is total: anyone is welcome to join, they never audition, workshops are free to those who cannot afford them and support is provided where necessary. It is difficult to know how to rate performances like this as there is nothing to compare it to – but due to the enterprise, commitment and achievement shown, and above all the level of inclusivity, this was a five star experience for cast and audience.