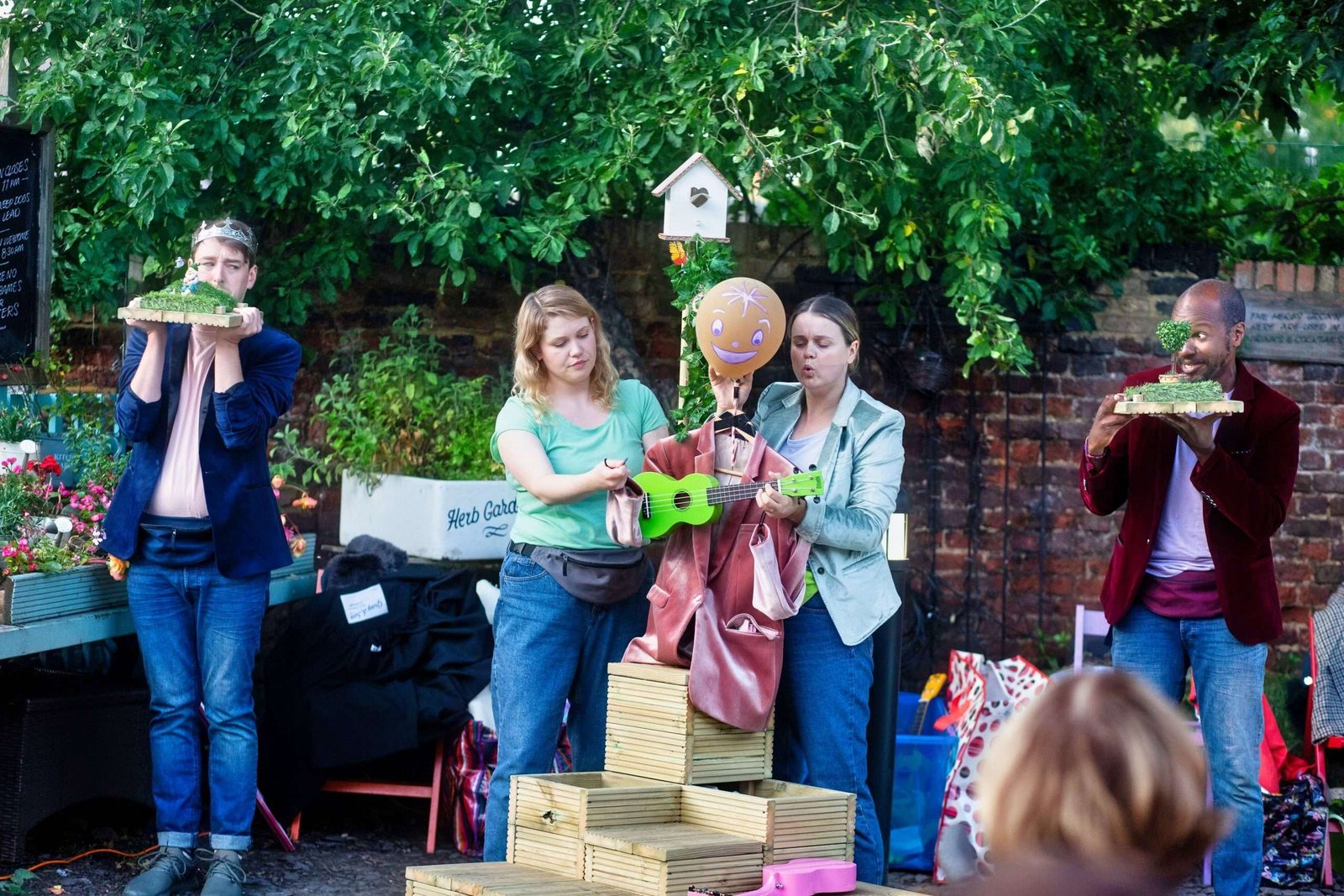 Credits: William Shakespeare - part of the Fuller's Shakepeare in the Garden tour

Whenever I see Love’s Labour’s Lost I’m struck by what a good play it is, in so many ways – so many interesting roles – and I wonder why it has never garnered the popularity of, say, Twelfth Night. It’s a pretty appropriate choice for now too since, as the opening song points out in this production, the starting point is four men choosing to self-isolate.

The King of Navarre and three courtiers vow to eschew the company of women and to live as self denying ascetics for a three year study period. Of course this doesn’t last long once a French princess turns up with three attractive ladies. Then there are subplots involving the lower born Costard and Jaquenetta and a ludicrously flamboyant Spaniard, named Don Amardo. To achieve all this with just four actors as Open Bar does is a rather stunning piece of imaginative versatility, which includes some witty homespun puppets.

It is also striking that the textual cuts are quite light so that the show runs well over  2 hours 30 minutes. That means that each member of this talented quartet has to work very hard but the energy levels are such that they make of each of them having to speak  as many lines as Hamlet seem effortless.

Each actor does a whole range of voices and the doubling is often fast and furious as well as gender-blind. Stuart Turner adeptly switches from earnest King to deliciously camp Boyet to the ridiculous Moth. Grace Kelly Miller gives us a warm princess, a hilariously pedantic Holfernes and has a field day as Don Amardo. I really liked the gently subtlety of Charlotte Worthing’s Costard alongside her deep-voiced Longaville and her determined Rosaline.

And as for Adam Courting as Berowne, he makes him plausible and charismatic although my judgement of any actor playing this role is impaired by very fond memories of seeing David Tennant do it with the RSC in 2008. Courting’s Sir Nathaniel is fun and, like all this cast, he is very good at flirting with the audience and making remarks which pretend to be out of role and off-the-cuff. Thus we get references to masks and Matt Hancock as well as nice injections of modern English and a commentary on the play as a running gag. David Knight’s jolly songs at the beginning of each half and at the end are part of this.

This engaging show is produced by Fullers and tours its pub gardens – hence the company name: Open Bar. It’s an enlightened idea which both brings people into pubs to buy food and drink while also providing work for actors and theatre creatives. I approve heartily of such an initiative given the challenges currently faced in the hospitality and performing arts industries. 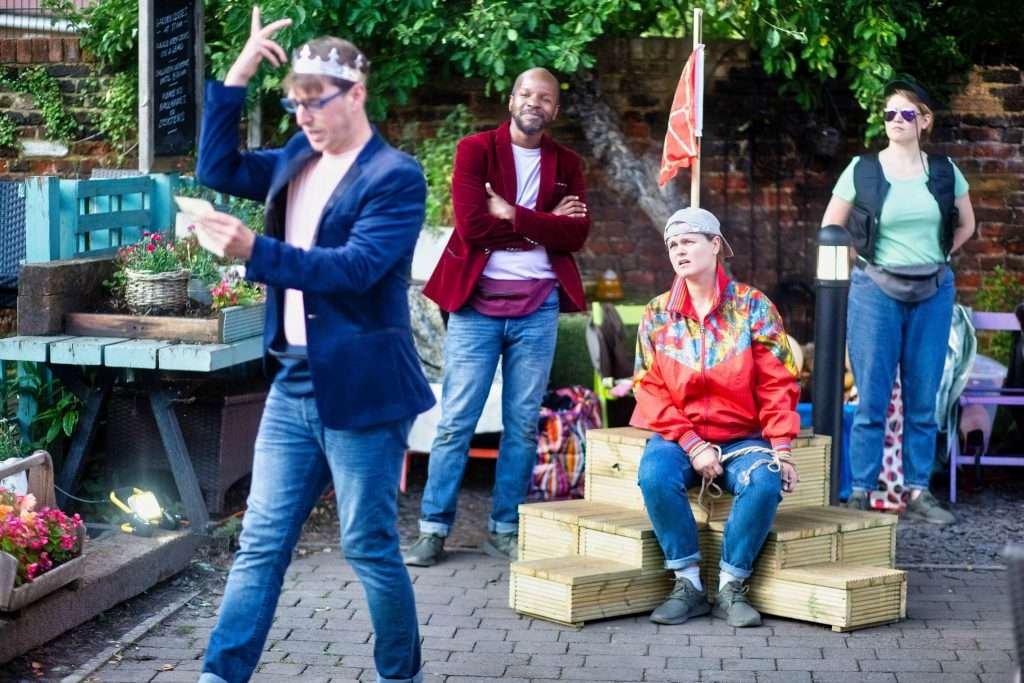 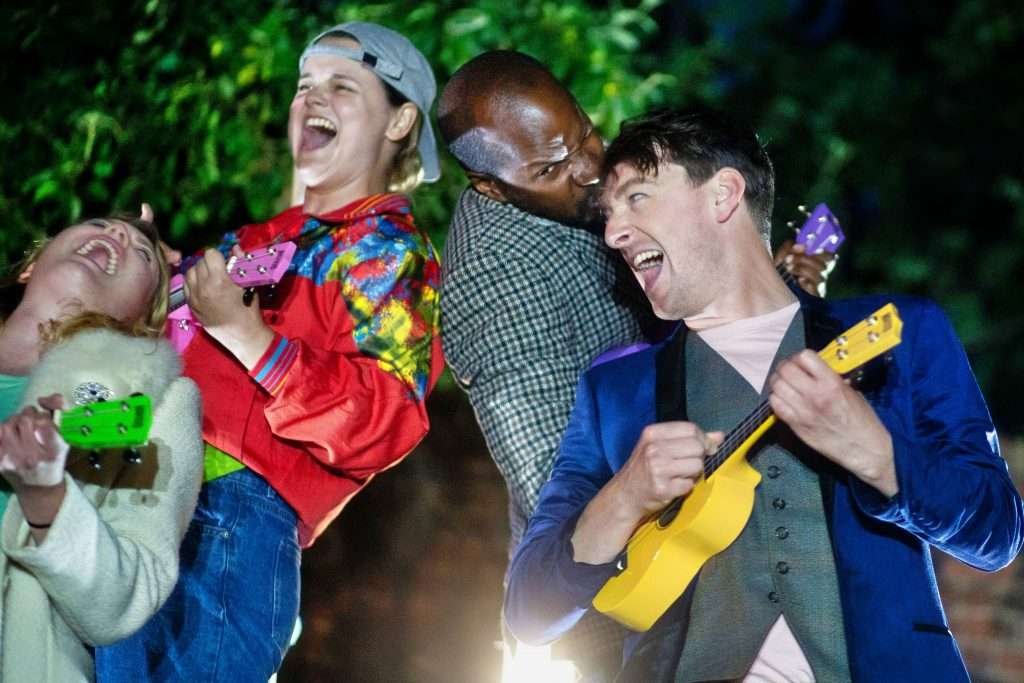 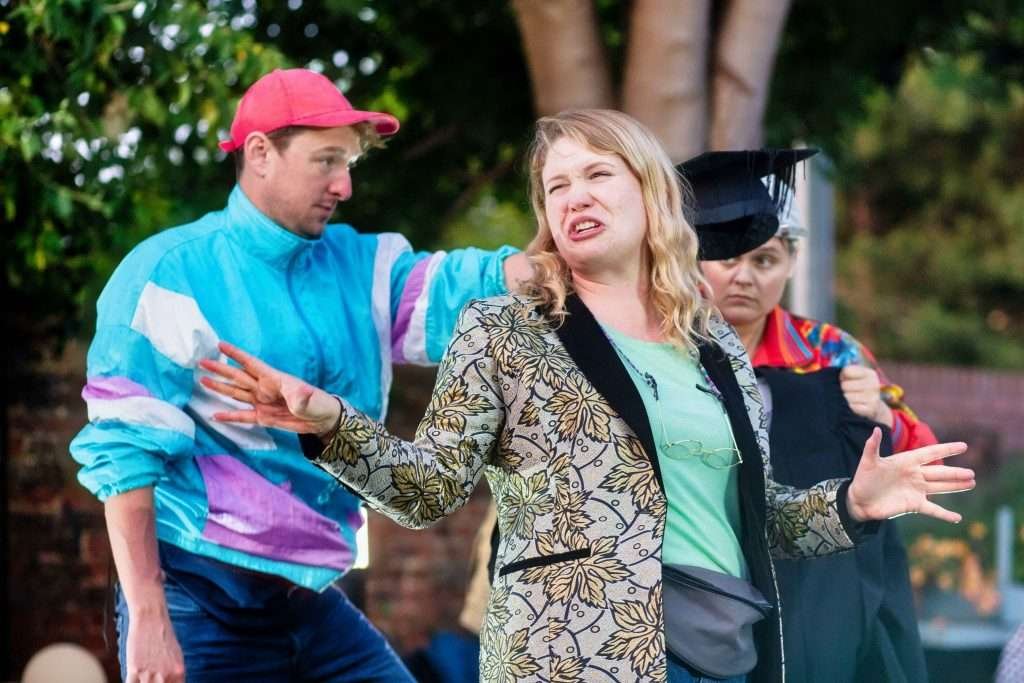 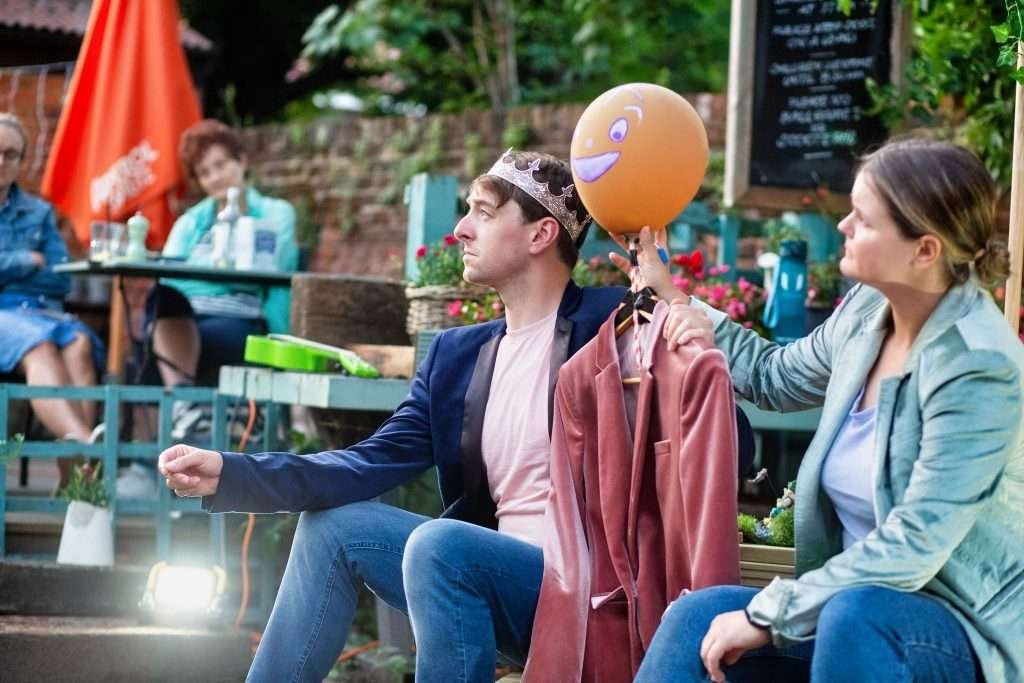 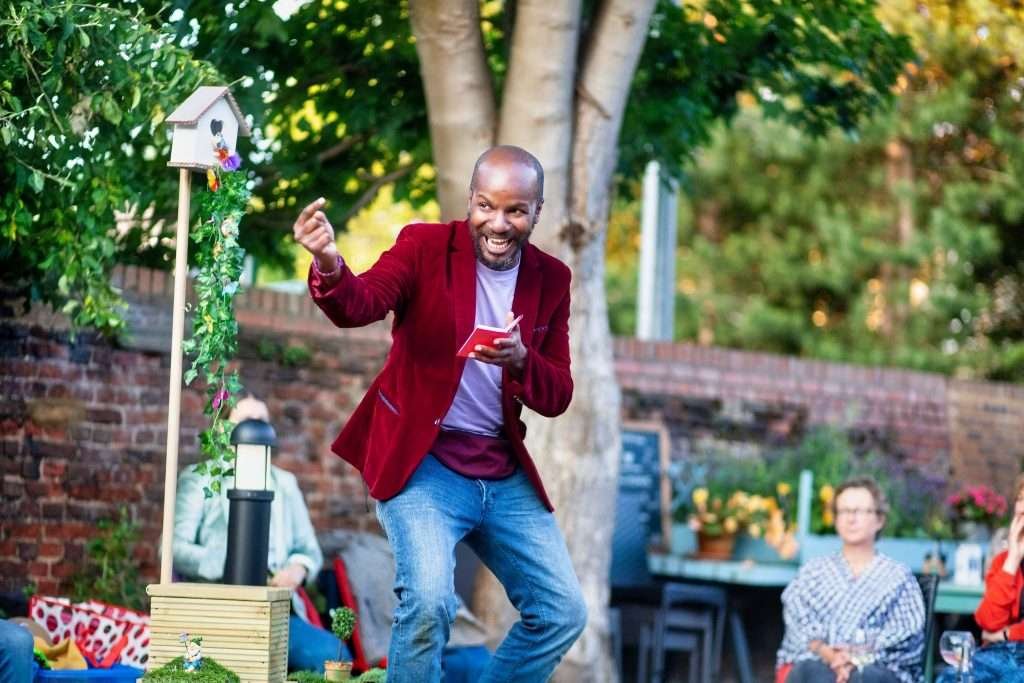 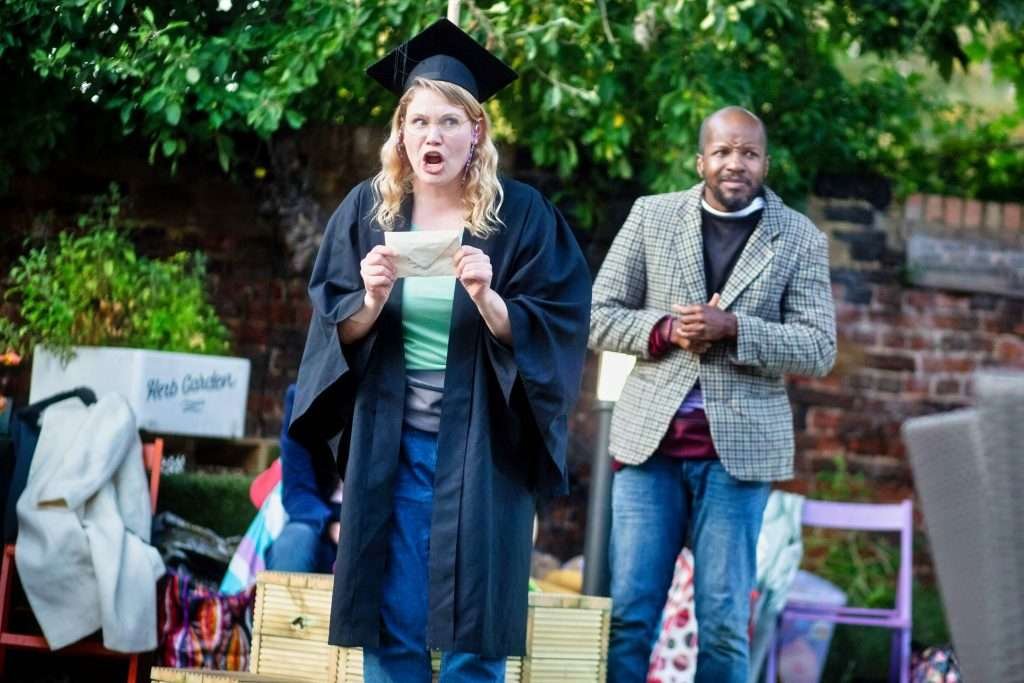 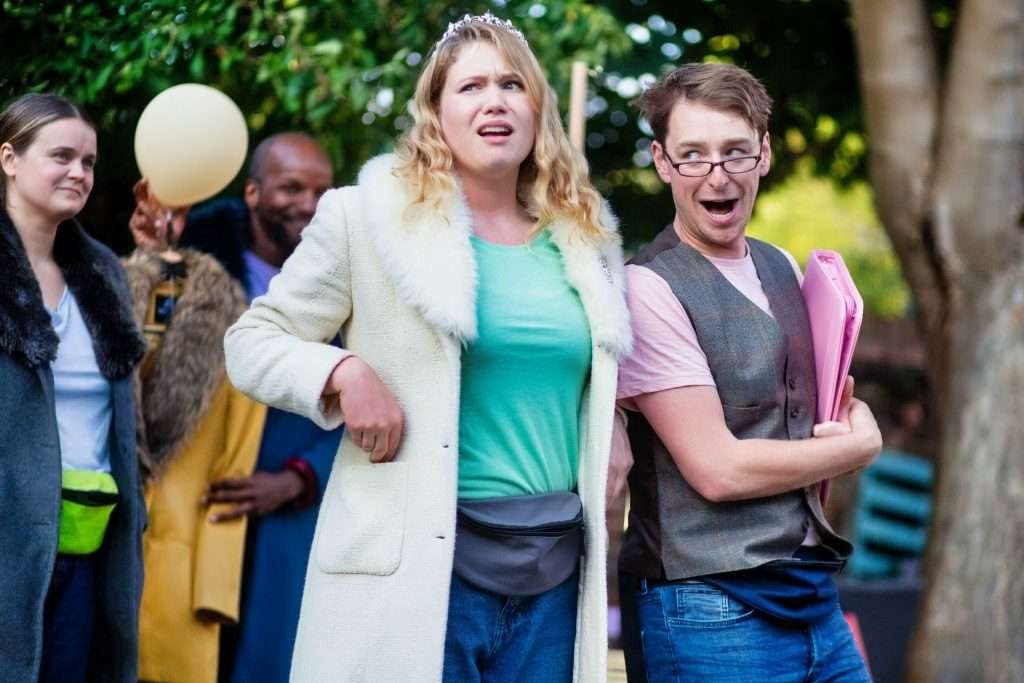 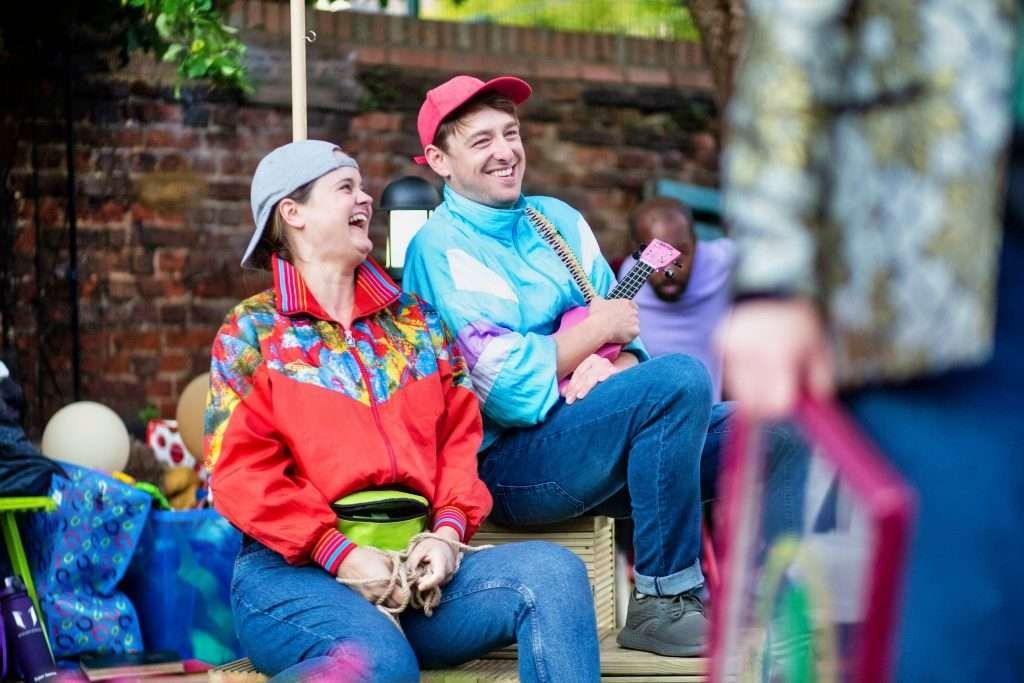