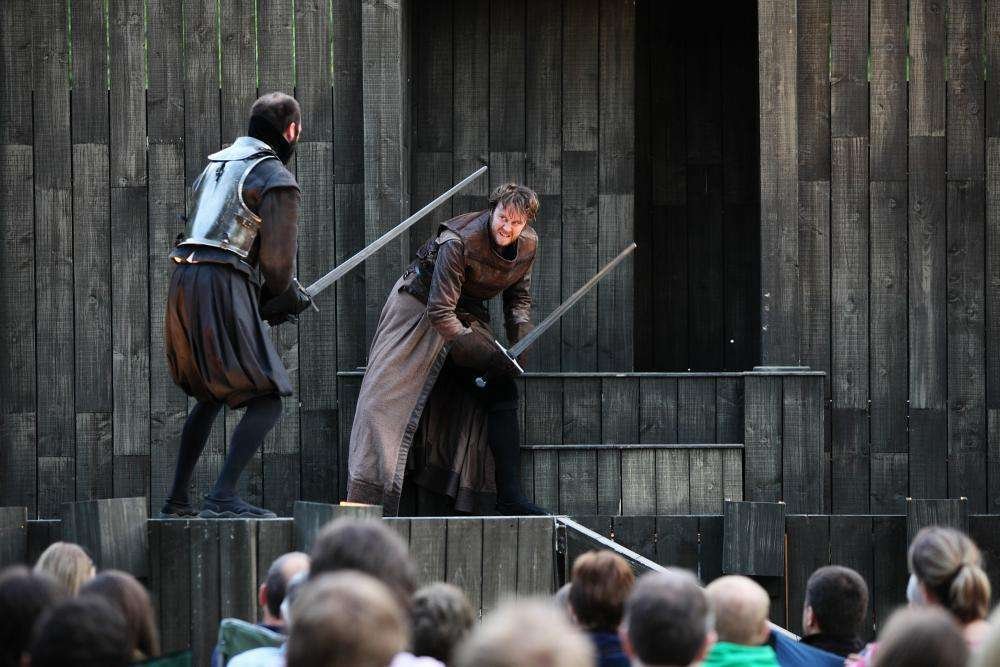 I can’t tell you how many times I’ve seen, read or taught Macbeth because I lost count years ago. If they gave badges for notching them up – as for blood donors – I’d be on Platinum by now. This show, I’m happy to report, is a very decent, succinct (95 minutes without interval) account of what is probably Shakespeare’s best known tragedy. It certainly attracted a pleasingly large crowd on a  warm evening at Hever. The sun was setting with scenic theatricality over the real-life castle as Macbeth finally realised his fate when confronted by Macduff at Dunsinane.

With an all-male cast of eight, this is intended to be the play as it might have been seen in Shakespeare’s time so it’s completely free of topical twists and the cast are mostly in shapeless brown clothes apart from Malcolm who wears a long cream coat-like robe and Lady Macbeth who wears a teal velvet dress. The neutral clothes help to facilitate the role doubling. Some of which has to be pretty nifty.

Ronnie Yorke, for instance, gives us a suitably bloody sergeant at the beginning of the play and then reappears a few minutes later as Macbeth.  He’s convincing both in his scenes with Rhys Warrington as Lady Macbeth and in his loneliness as the trap closes in the final minutes. His pivotal “Tomorrow and tomorrow and tomorrow” speech is nicely judged and moving.  And Warrington’s sleep walking is distressing without being overegged.

I admired the way the play had been cut. Donalbain has gone. Fleance is present but not visible so his lines have gone. And it had never occurred to me that you don’t actually need to see the murder of the Macduff family. After all Macbeth says he’s going to do it and we see Macduff’s reaction to it. The play, I now realise, can work perfectly well without it. And it’s a long time since I’ve seen a Macbeth in which the director (Peter Stickney) observes Shakespeare’s stage direction “exeunt fighting”. In this production Macduff and Macbeth simply disappear and then Macduff comes back with the head – as the playwright intended.

A word of praise to for the decision to use the late medieval French song “L’Homme Armé” and drums at the beginning and occasionally at other points. The energetic rhythm suits the play perfectly. I also admired Morgan Brind’s set which looks like craggy, vertical planks of wood vaguely connoting battlements. Steps behind it means that you have another performance level at the very top as well as several ways on and off at stage level. Ingeniously, part of it is detached to become the table for the banquet scene and other pieces come off to be the branches of Birnam Wood.

There were a lot of children and young people with their families at the performance I saw and that’s very encouraging to see. Moreover, for anyone who hasn’t seem much Shakespeare this “straight” production with its clear story telling would be a good starting point although, for me, it was acceptable without – for the most part – being especially memorable.