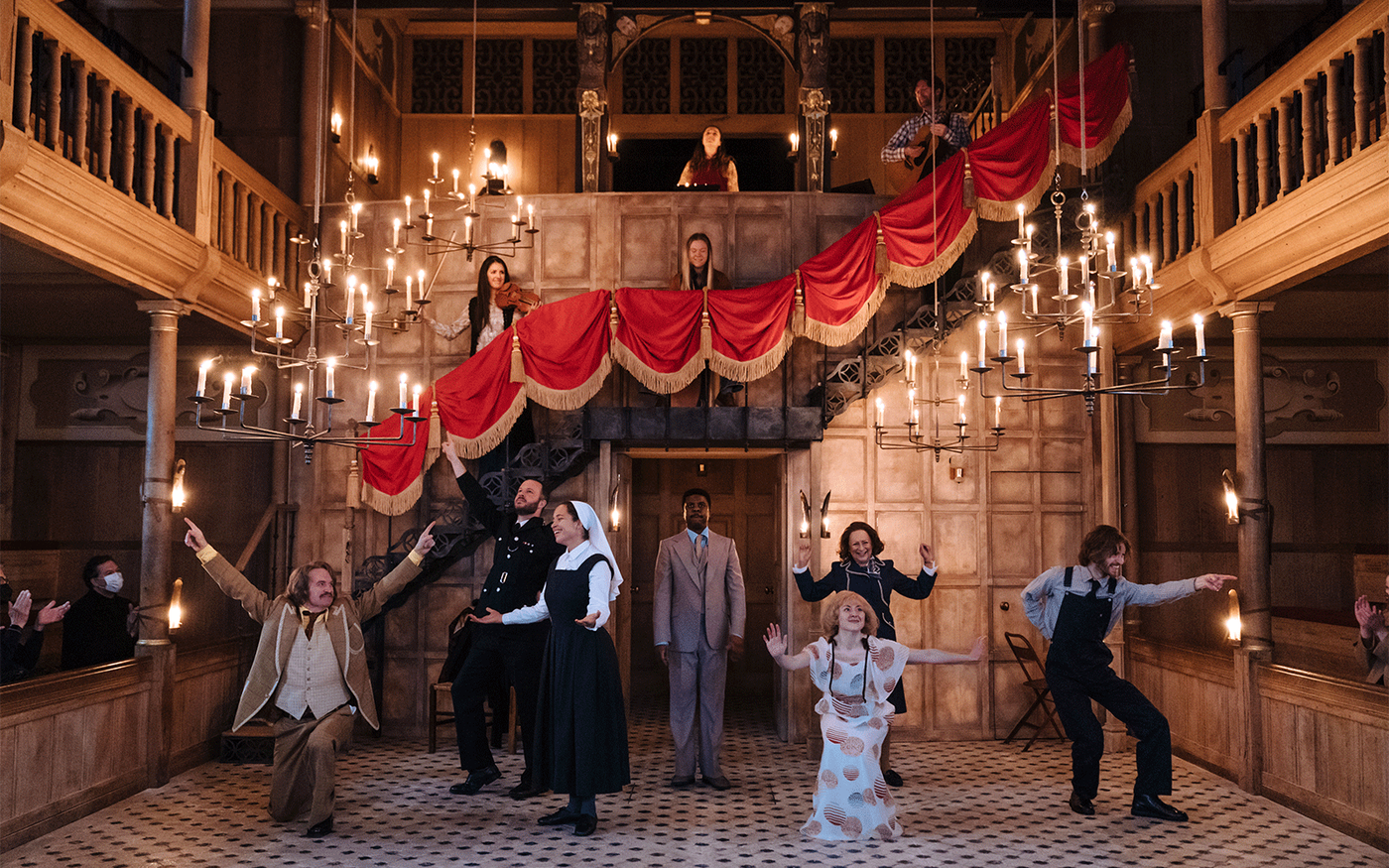 Usually listed –  by people who feel the need to categorise – rather uneasily as a comedy, Measure for Measure is actually a pretty serious play although it descends close to farce in Acts 4 and 5 which is why the compulsive categorisers call it a ‘problem play’.

Blanche McIntyre’s 1970s take on it plays it for laughs. Her cast of eight (there’s some very accomplished doubling) squeeze every possible innuendo and comic reaction from the text which is adeptly cut with the addition of a line here and there or a changed word so make sure the story telling is as clear as it could be.

Sometimes the laughter, however, seems inappropriate. This play is at heart about the attempt of political leader to use his power seduce a young girl while at the same time ruthlessly condemning (to death) others who ‘fornicate’.  There’s nothing funny about that. The hypocrisy rings hideously, topically true. And there are some horribly familiar attitudes, “See that she has needful but not lavish means” says Angelo, coldly, of the heavily pregnant Juliet reminding me, on this occasion of many people’s attitudes to cold, wet migrants on beaches.

So, although this production is beautifully staged and the acting outstanding there are still problems in the play which are not addressed.

Hattie Ladbury makes a good unambiguously female Duke. Tall and cadaverous in appearance, intense and unsmiling she manipulates other people like a puppet master although it is, as ever, a puzzle why she puts Angelo in charge thereby putting the welfare of so many people at risk given what she knows of his background.

Georgia Landers’s Isabella is warmly righteous and fluent in her pleas for her brother’s life but she doesn’t quite bring out the unconscious eroticism of her lines and it’s hard to see quite why Angelo suddenly feels he must have her virginity.

In a strong cast Eloise Secker stands out as Pompey, flirting with the audience with insouciant insolence. She gives him a sense of undaunted wisdom which doesn’t always come through. Secker also gives us a wan, wistful Mariana looking like a young Diana, Princess of Wales – all blonde bob and hurt. And at the end she is forcibly married to a man who clearly doesn’t want her. Secker does the troubled mixed feelings well.

There’s a good performance from Gyuri Sarossy as Lucio too, a man too garrulous for his own good. Sarrossy watches, reacts and times his interjections totally convincingly. He also conveys Lucio’s friendship with Claudio and the contrasting coldness to Pompey effectively. It’s a gift of a part and Sarossy really runs with it.

I’m unsure about the comedy of the executioner struggling on with an axe as if we were in The Mikado or producing Raguzine’s head dripping with blood or various other moments contrived to make us laugh. An innocent man’s life is quite seriously at risk (“Be absolute for death”) and we shouldn’t be allowed to forget that.

All in all, though, it’s an entertaining evening but this account of the play but – and maybe that’s the essence of theatre – it asks more questions than it answers. I liked, though, the ending, in which ambiguity, incongruity and indecision is built into the text. Both Ladbury and Landers drive that home with eloquent facial expression.

The Sam Wanamaker Playhouse setting is exquisite, smaller than some pub theatres, and candle-lit – with the (mostly masked) audience packed in like sardines in an authentically Elizabethan/Jacobean way. They wanted vaccination status at the entrance. Otherwise it was a case of “Covid be damned” just as the first audience would, I suppose, have regarded the plague. I was puzzled by three groups of people separately walking out in the first half, though. Did they not like the play, the production, the crowding or the backless benches? 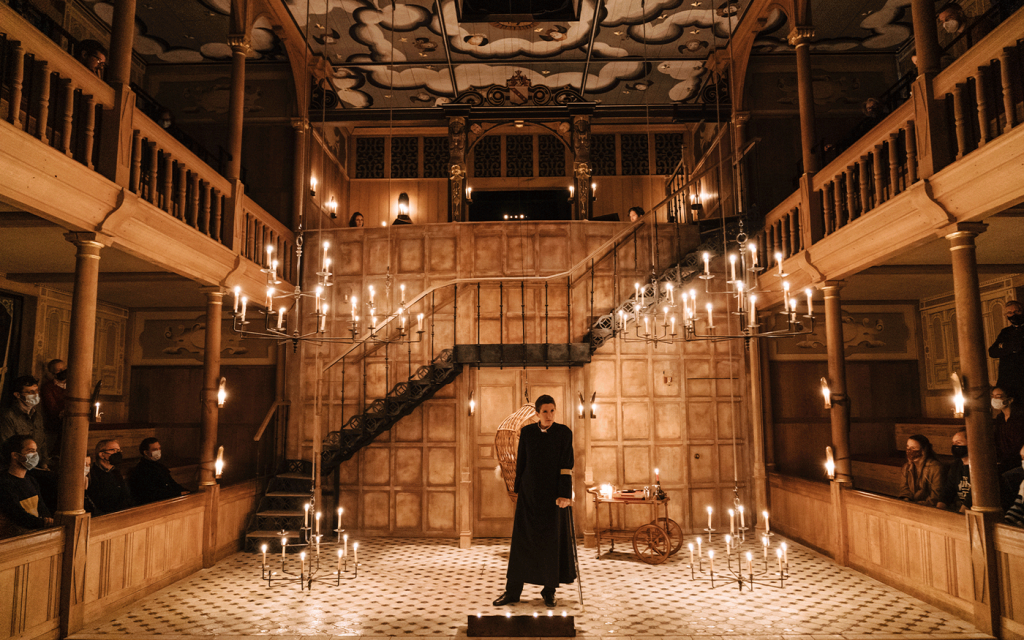