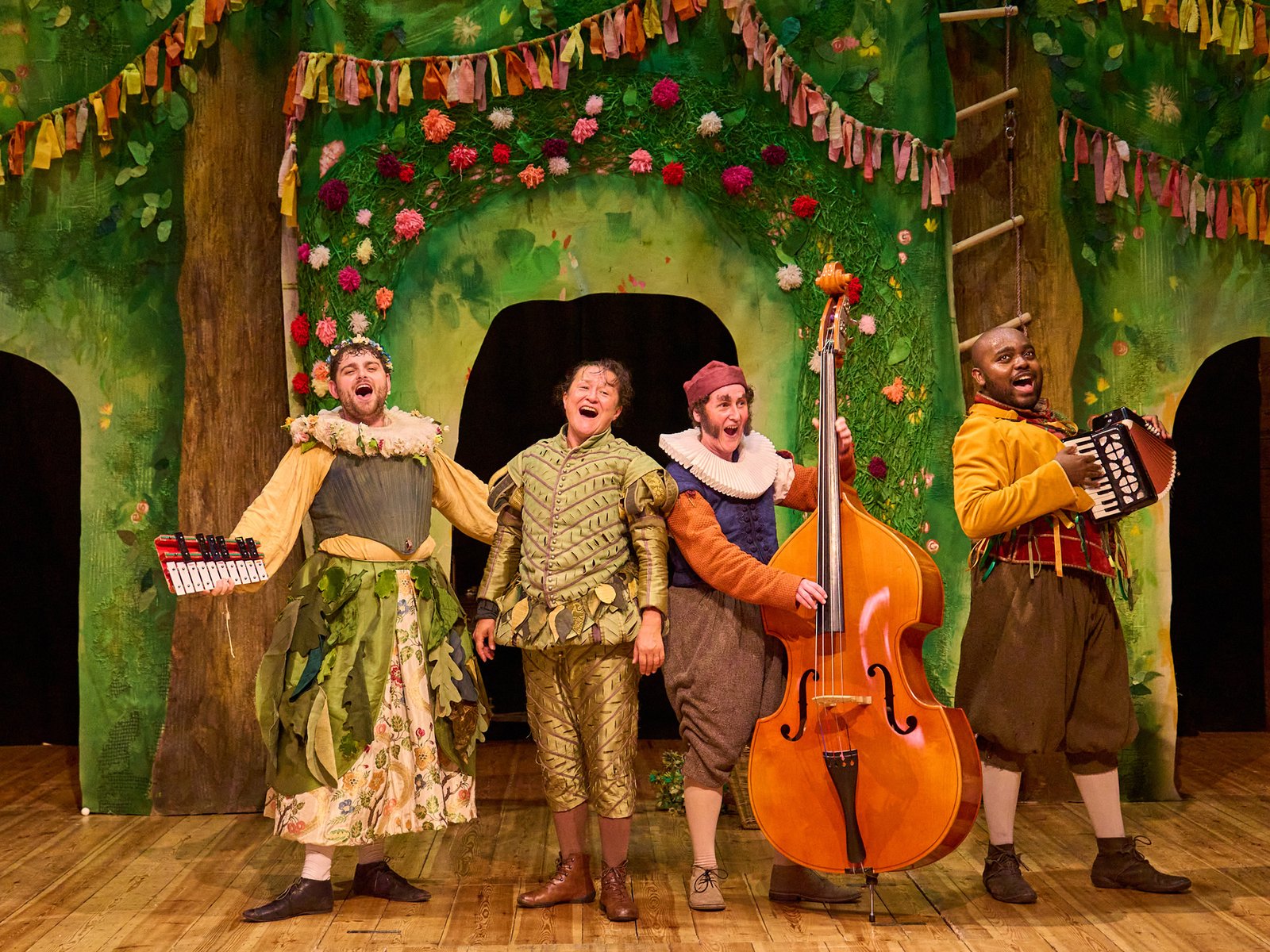 Credits: by Kerry Frampton and Ben Hales. A co-production with Splendid Productions

Reading the attractive poster-programme for Midsummer Mechanicals led to the welcome news that the writers and director have been responsible for the much admired Sleeping Trees shows, so I knew we would be in for something special. The Sam Wanamaker Playhouse at Shakespeare’s Globe may not be the most comfortable of theatres (as the cast sarcastically acknowledged) but the best part of two hours on backless benches sped by in the company of this talented cast.

It’s very much a family show with something for everyone, although the humour reliably hovers around the 7-year-old level. The basic conceit works well: Bottom and his troupe have been invited back to the court by Duke Theseus to perform at the first anniversary of his marriage. In the first half we watch the increasingly chaotic rehearsals for “The Adventure of the Weaver and the Fairy King” and in the second half we see the performance itself.

Of course, nothing goes as planned, and various cast members don’t turn up. As soon as I saw that Snug would be responsible for Weather and Wildlife I had a feeling the audience might be playing his role, which they duly did with great enthusiasm, even coming up with suitable noises for sad worms. Interaction with the audience throughout the performance (relaxed like all the others) was highly skilled and showed the experience this team have with children’s theatre. Not only could they bring out ideas and suggestions from the quieter members of the audience, they also knew how to manage those who would quite like to have been on stage themselves.

As Francis Flute, Sam Glen is a late arrival, having defected briefly to a rival amdram group. Begrudgingly taking on another female role as the Fairy Queen; he shows himself to be the owner of a very pleasant singing voice and is a strong counterpart to the other characters. His aside about his beard having now come is not lost on the many in the audience familiar with the Pyramus and Thisbe sequence. Jamal Franklin is an imposing presence and something of a sounding board for the others, and the children in the audience were on his side from the beginning. Melody Brown plays the apparently minor role of Patience Snout, but comes into her own – and reveals the true extent of her talents – by taking on the role of an imposing Fairy King, despite the horror of the rest of the cast at the thought of a woman acting.

Completing the cast is the vastly experienced clown Kerry Frampton as Bottom. Frampton is also co-writer (with Ben Hales) and co-director (with the Globe’s Lucy Cutherbertson). Her skilled and energetic performance as Bottom is very funny. She also has an ability to engage with each young audience member so that they will do anything for her and her colleagues. By the time we have returned from the interval, to see an extensive forest set erected (design by Rose Revitt), the whole show steps up to yet another level with a delirious amalgam or runaway bears, fights and mishaps. All this and catchy songs and dances throughout the performance, still being sung by young audience members when leaving the theatre. By the end of the performance there was a collective smile on the face of the whole audience, many of whom enjoyed watching the young children’s responses as much as the cast, so much so that I am sure I would enjoy it as much all over again with a different audience.

There is a range of children’s theatre available over the summer, much of it worth taking in, but I have rarely seen anything as impressive as Midsummer Mechanicals – get to the Sam Wanamaker Playhouse before the show closes on 21 August.