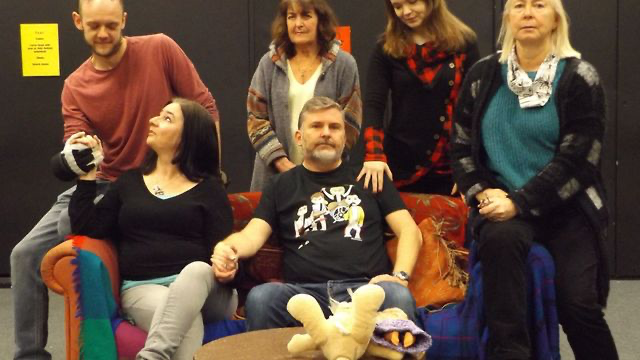 Written and directed by Nigel Manson, this crisp, comic farce cut along at a decent pace, garnering a stack of laughs along the way.

Peppered with the odd local reference, and covering infidelity, deceit, mistaken identity, linguistic challenges and pest control, there was plenty to keep the audience’s attention.

All six cast members enjoyed strong performances, with Melissa Collin (as Melissa) and Ashley Burgoyne (George) carrying the main burden, excelling with artful confidence and cheerful anxiety. Anna Ryan (Meg) as the nagging nymph and Jamie Manson (Greg) the Mellors-lite gardener both embraced their carnal conundrums with talented enthusiasm. The agreeable Robin Spruce (Miss Marble) floated in and out with a slightly detached authority gently punctuating the plot. And Bernadette Alexandrou (Lolita) collected plenty of home run laughs for the team with expert comic instinct.

An inventive set, paired with excellent use of lighting, enlarged the performance space into a believably large house and garden, with accompanying nooks and crannies, which the director and performers utilised to good effect.

With both performances this weekend already sold out in the theatre’s newly refurbished auditorium, loud and generous acclaim deservedly greeted the performers at the close.

But perhaps the evening may best be summed up with a comment outside the theatre, when a departing audience member was overheard to say to his companion: ‘That was brilliant!’