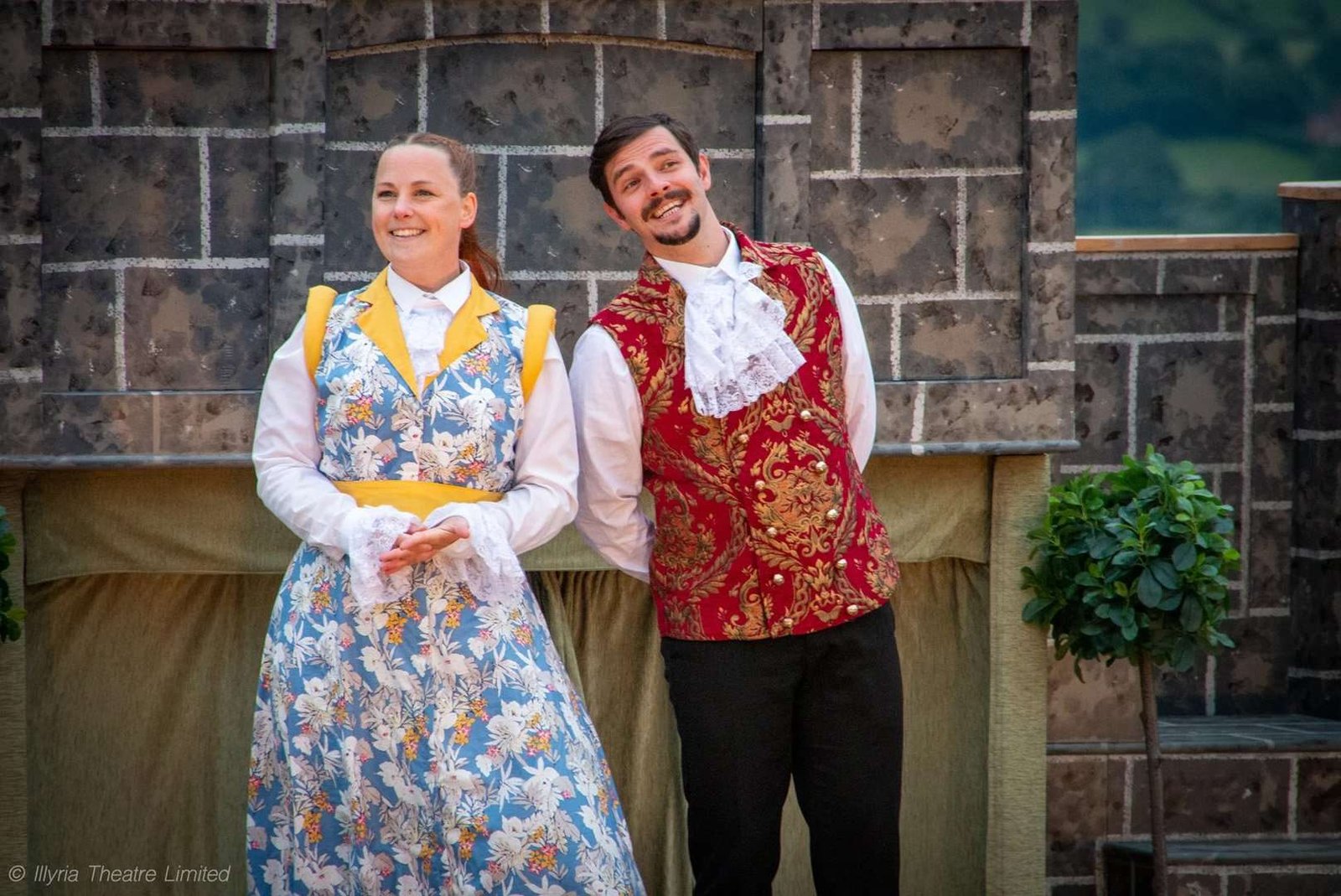 Show: Much Ado About Nothing

Much Ado About Nothing

All small touring companies excel in versatility but Illyria really take multi-roleing to a new level. In this show five actors present a play which is blessed (cursed?) with one of Shakespeare’s most complicated plots – darting on and off stage in different costumes at impressive speed. And most of the time it works although knowing the play is an advantage – not shared, I think, by every audience member at the performance I saw.

It’s a strange piece anyway. The Beatrice and Benedick story is arguably a subplot. Yet, in many ways it’s far more interesting and nuanced than the main patriarchal narrative about Hero and Claudio.

David Sayers is outstanding as Benedick. He grimaces, squirms, banters, joshes and has a delightful repertoire of puzzled, alarmed and anguished faces. Master of comic timing, he coaxes a laugh out of lines I’ve barely noticed before. And, among other roles, he also gives us a delightfully slimy, cowardly Borachio wriggling around trying to save his own skin.

His scenes with Nicola Foxfield’s Beatrice are nicely nuanced and she finds all the right feistiness spliced with a hint of vulnerability. And of course the whole point – made very clear in this production – is that the two of them are drawn to each other from the outset which is why they love to spar with, and goad, each other. It’s yet another of Shakespeare’s very perceptive creations. Foxfield also does a mannish Claudio – devastated when he realises how he has wronged Hero – and a very enjoyable Verges complete with broad Brummie accent.

I liked Rachel O’Hare’s very feminine Hero and her absurd self-important, goose-stepping Dogberry. Chris Laishley is suitably paternal as Leonato and dastardly as Don John while Chris Wills does well as Don Pedro and Friar Francis among other roles.

Alan Munden’s set – which has to be portable, obviously – provides a small raised platform backed by an upper level reached by steps on both sides as well as out of sight at the back. This neatly allows entries and exits on three levels.  A simple tent providing a “tiring house” behind wherein all those high speed costume changes take place, visibly if you’re seated to the side which makes the whole thing seem more inclusive.

One clever touch in this production (veteran director Oliver Gray who founded this company 30 years ago knows what he’s doing) is the use of a few seconds of stage business to allow a costume change and re-entry. Nicola Foxfield as Verges momentarily struggles to drag a heavy anvil off stage, for example. Or we see Sayers as Benedick thinking and pulling faces briefly alone on stage before the next bit of action follows seamlessly.

Tonbridge Castle is ideal for outdoor theatre. Its central circular grassy area is effectively an auditorium and the building behind makes a good backdrop although you can hear sirens and traffic from the nearby high street and the good acoustic is a mixed blessing. It means you can hear the actors very clearly but also that if members of the public are elsewhere in the space and chattering you can hear that too.