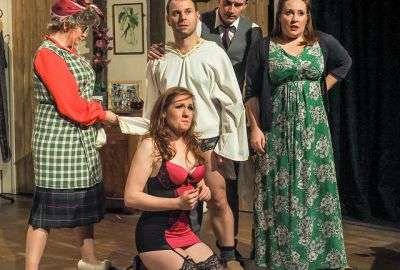 It’s interesting how nine years after our fishy magazine was launched people still ask us “So, why ‘Sardines’?” One thing’s for sure, after this coming week no-one connected with Sedos (one of the capital’s premier non-professional theatre companies) will ever make such an enquiry. In fact it’s probably taking the Bridewell Theatre’s current audiences approximately thirty seconds to realise what our seafaring baptism was all about.

Yes, Sardines has returned to its roots as the Bridewell’s resident company brings Michael Frayn’s multi-layered, classic farce, Noises Off, to the stage. And with a whole week still to go I cannot urge you, no… plead with you, no… beg you enough to clear your diaries and get down to the City of London this coming week for one of the funniest evenings in theatre you’re ever likely to experience.

In 2011 The Old Vic broke its box office records when it revived Noises Off to great critical acclaim. Directed by Lindsay Posner and featuring a cast which included the likes of Jonathan Coy, Janie Dee, Robert Glenister, Jamie Glover and Celia Imrie, the production even enjoyed a West End transfer in Spring 2012 to the Novello Theatre.

And being somewhat infamous for my critical reviews I don’t say that lightly. This production may not be built on a West End budget or feature actors on West End wages, but believe me when I say it has everything going for it. From the Bridewell’s intimate space to Steven King’s idyllic set to director Matt Gould’s dynamic cast, the entire company – both on and offstage – must be praised for a stunning production. Especially when you take into account how difficult Noises Off is to get right.

Indeed Sedos is enjoying a vintage year; only six months ago Sardines was raving about its sublime production of Legally Blonde. But while featuring a smaller cast and a completely different genre, I would have to put the current production on a par with the musical in terms of pure theatrical excellence.

Not only do Sedos’s endeavours consistently attract such high-quality actors, but its auditioning pool is obviously of such a generous size that a good director can make sure they choose the perfect cast. Noises Off’s nine performers have been very carefully selected and, in a truly ensemble production, every single one has justified their place onstage with spot-on characterisations, boundless energy and impeccable comic timing. Even Pippa Kyle and Stephen Beeny’s ‘professional’ glossy programme is worthy of special praise for going the extra mile.

In the first-ever edition of Sardines Michael Frayn told us in an interview that the idea for Noises Off first came to him back in 1970: “The first show I ever wrote was called The Two of Us, which consisted of four short plays – produced originally at the Garrick Theatre with Richard Briars and Lynn Redgrave. The point was that these four plays were performed by just two actors, and the last of the series, was Chinaman, a farce with five characters which the two performers had to play between them. I watched it backstage one night and the sight of people running insanely from door to door backstage, doing quick changes as they went, while the stage manager put an arm on the first door to make it look as if the character was still there, seemed to me funnier than what was going on round the front. So I thought I would write a farce seen from behind.”

The result of Frayn’s backstage experience is a three-act play which repeats the opening act of a fictitious professional touring production again and again. First we see it as a strained late-night dress rehearsal, followed by the same act viewed from backstage one month into the tour (meaning the set has revolved 180°), and lastly, the third instalment presents the very same act seen from the auditorium but on the last leg of its tour at Stockton-on-Tees.

What’s so funny about that? In Act One, we meet the dysfunctional fictional company of actors, get to know their personalities (plus who’s sleeping with whom) and accustom ourselves with their touring play. In Act Two, we discover relationships are at breaking point and, as the company attempts to present their play, we see the hilarious goings-on backstage – all in silence (Noises Off). Finally, in Act Three, everything has now descended into chaos and knowing what’s going on behind the scenes we see the disastrous results onstage.

You almost couldn’t make it up!

On press night I deliberately took someone with me who hadn’t seen Noises Off before. At times he was weeping with laughter, so much so that I became quite concerned with his health – let alone the fact that he was missing chunks of action due to being bent double!