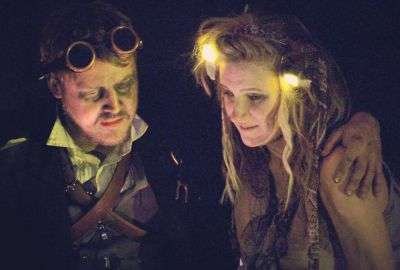 Fringe festivals have a habit of throwing up a myriad of eclectic and interesting spectacles performed in an equally diverse collection of venues. This week is no exception, as part of London’s busy and widespread Camden Fringe, Crouch End’s obscure Moors Theatre Bar (one of 22 venues collectively hosting this year’s 250+ Camden Fringe shows) saw brand-new production, Orchid, come alive from writing duo, Chelle Payne and Daniel Len.

Payne herself takes on the title role in a post-apocalyptic world set deep in the tunnels of the London Underground network. For twenty years, small groups of human survivors and their children – some of whom were inevitably born underground – have been scratching out a desperate tribal existence in near darkness. Thankfully, for the Fringe audience, a limitless store of batteries has presumably been discovered by our group of five cave-dwellers enabling their handheld torches to still function after two decades – otherwise we wouldn’t have seen a thing. Who doesn’t love a nice bit of theatrical license.

Eighteen-year-old Orchid is one such child who has been born in the dark; a dreamer and lover of stories who knows no other existence but constantly yearns for an escape from the choking world into whatever kind of civilisation remains up above. It’s an interesting concept for a plotline, and one that I wanted to find out more about – What caused this turn of events known only as ‘The Fall’? What catastrophe sealed these people’s fates in this underground tomb? Nuclear war? Disease? Natural disaster? And how does anyone survive for twenty years? (we do find out that ‘cat’ is one such delicacy on the menu.)

Unfortunately we’re never told exactly what happened, but this is probably because Orchid isn’t really about the specific circumstances of where these people are. The play, I feel, serves more as a metaphor for the need to escape our daily existence and the need to find what truly lies inside us – even if it means jumping into the unknown.

So, did it work? For the most part I would say it did, although there could perhaps be some reworking and sharpening up here and there in order to give the play more of a journey and natural flow. There are some very nicely written parts in the piece including Thomas (Jimmy Jameson) for instance; previously a depressed and lonely man who, twenty years ago, was about to commit suicide via the tube track when whatever happened, up above, happened. All of a sudden, Thomas finds he has a place, he’s wanted and needed, so much so that he decides to seal up and hide the survivors’ only route of escape in order to preserve the new status quo.

It must be near impossible to work a 12ft x 12ft performing space while attempting to portray a near pitch-black, claustrophobic and dangerously savage world, and all in under sixty minutes. So plaudits must go all round for achieving such pleasing technical and dramatic effect throughout.

The only time I grew restless was during the half a dozen drawn-out scene changes. With the only furniture onstage being five 2ft x 2ft cubes (which might have more fittingly been painted black than painstakingly papier mâchéd by the excellent Stage Manager, Charlotte Payne), the pretence that each one weighed a tonne as they were slowly dragged or pushed into place for the next scene was not only excruciatingly contrived but unnecessary to the plot. But this is ultimately a minor point.

As a production that started life as a (successful) Kickstarter campaign, it just goes to show what’s capable if you’re determined enough. However, it’s in cutting your production teeth with Fringe shows such as this that you really find out what grass roots professional theatre is all about, and how hard it is to make a living from it. I should think Ms Payne – writer, actor, producer – will be enjoying a little time to find her sanity after a venture such as this but, when she does, let’s hope she starts planning her next theatrical assault. There’s plenty of potential in this lady if one can stay the course.

…Perhaps Orchid, the Continuing Story. I wonder what lay waiting for her in the outside world.