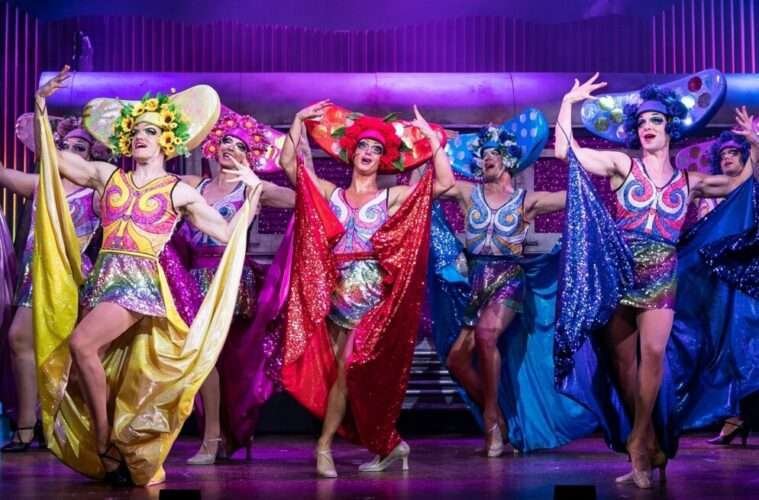 Show: Priscilla Queen of the Desert

Priscilla Queen of the Desert

Having already played Tick in this rainbow of a show provides the perfect way for Jason Donovan to co-produce his first show. In this production which sees three performing drag queens travel across Australia so Tick can perform for his son (yes, you heard that right…), Strictly winner, Joe McFadden, has been replaced by Miles Western as Bernadette (you can thank Covid for that!) while Nick Hayes and Edwin Ray remain in the roles of Felicia/Adam and Tick/Mitzi respectively.

In addition to our trio of drag queens, dressed in white, the show’s three real female ‘Divas’ return to the stage time and time again to provide the vital female range that a male vocal can only dream of reaching – hence the reason why so many drag queens elect to mime their performances. So with ensemble in fine support the stage is set for it to Rain Men, almost literally. All the great drag numbers are covered such as I Will Survive, Go West, What’s Love Got to Do with It (featuring a great Tina Turner impression), Don’t Leave Me This Way… you get the idea.

Coming through Woking’s New Victoria Theatre this week the touring extravaganza played to a packed house. In fact ATG appears to be leading the post-Covid re-opening way back to normality in fine style. And who can argue with that. The twenty-strong cast members who perform to the pumping sound of MD Richard Atkinson’s slick seven-piece band give a strong account of themselves. The whole show is really something of a party from start to finish. It never takes itself too seriously and the plot isn’t that complicated either. And the audience love every minute of it.

Make no mistake, this is a big show, which is probably why it’ll probably be heading for the West End next year. Just imagine, your first production and you could be heading to London!

if you are doing a review please get the cast correct.miles western and nick hayes have return to their roles as bernadette and felicia respectively whilst edwin ray has taken on the tick role