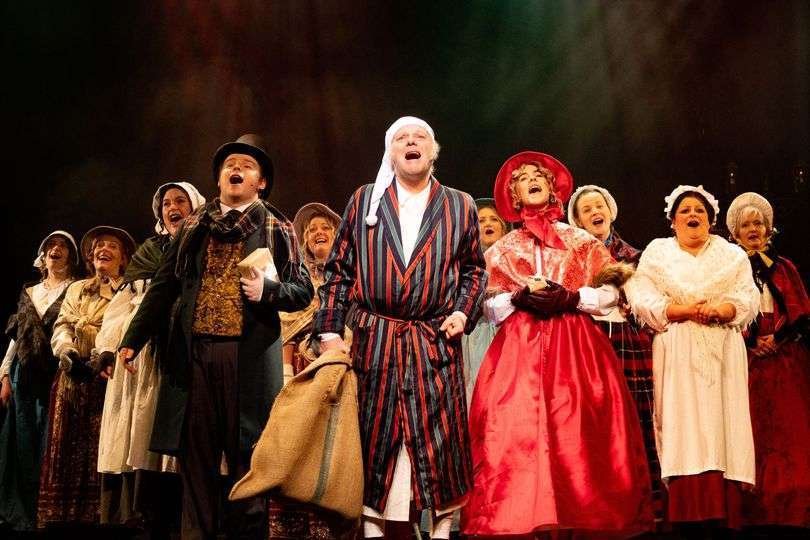 The Christmas season has arrived, well, a little early at the Palace Theatre, Westcliff, but welcome all the same.  Being a bah humbug sort of person when Christmas is mentioned, I have great sympathy for Scrooge.  However, anything miserable about his character in Scrooge: The Musical is soon eradicated by the sense of joy that Southend Operatic (SODS) bring to the stage.  It is obvious from the look on the faces of the ensemble players as they sing and dance, that they are enjoying every minute of being back performing.

The original musical was staged in 1992, with book, music and lyrics by Leslie Bricusse. Its score and book are closely adapted from the music and screenplay of the 1970 musical film Scrooge ,which starred Albert Finney and is also based on the Charles Dickens‘ 1843 story  A Christmas Carol.   I do recall seeing the movie, on TV, but all I can remember is Anton Rogers singing and dancing on the top of a coffin. Bricusse was nominated for an Academy Award for the song score he wrote for the film, and most of those songs were carried over to the musical. The 1992 production starred Bricusse’s long time writing partner Anthony Newley as Scrooge.

The story, is the familiar one of the miserly Scrooge who begrudges his assistant Bob Cratchit time off for Christmas.  One night the ghost of his long dead partner, Jacob Marley visits him.  This apparition (Ross Howard) appears as a Zombie clanking his chains.  The pair are then joined by more zombies, or phantoms. I particularly enjoyed their dance number as they moved, in strange positions around the stage, whilst Marley sings Make The Most of This World.

Three spirits then visit Scrooge, a barnstorming performance by Les Cannon, who dominates the stage for the whole of the show. Les not only sings the songs, but also delivers them like Rex Harrison and acts them out as well. There is a delightfully girlish performance by Jennifer Stacey, as Christmas Past, and scene stealing by Christmas Present (Jess Byford), dressed up in green like a holly tree, and sounding like a version of Nancy from Oliver.  Finally, a black widow appears as the future to show the dramatic end of Scrooge, if he doesn’t change his ways.

The child Tiny Tim, played by Sanjay Madhusudhanan, is made for the part, as he is so small.  He sings a plaintiff The Beautiful Day that plucked at the heartstrings. Mr and Mrs Fezziwig, Suzanne Walters and Paul Alton, lead a rousing ensemble rendition of the number December the 25th. As a blind fiddler plays along, they sing their hearts out, exuberantly dancing around the stage.  There is also an exhilarating performance of the showstopper Thank You Very Much led by Tom Jenkins (Ewan Dunlop) as an athletic, cockney, cheeky chappy.

The difficulty with the Palace Theatre is that the stage has quite a steep rake and it inhibits some of the dancers, which is a shame, but all musical groups performing there have the same problem.  Additionally, some of the staging for Scrooge is quite static. However, all the roles are beautifully sung, as we would expect from Southend Operatic, and the rousing ensemble numbers are particularly good with music provided under the direction of Conductor James Green.

There are also some very good special effects with voice echoes, thunderclaps and spooky goings on that sometimes has the audience jumping out of the seats.

I was surprised however, at the minimalist set, which in some scenes was so bare that it detracted from the feel of the show.  It may have been to simplify the set changes although there is still quite a bit of furniture moving on and off, but it is deftly handled. It might have been director Jonny Buxton’s decision to contrast the bleakness of Scrooge’s life with the brightness of the happy ensemble performers with their colourful costumes.

The show will be the 100th SODS production performed at the Palace Edwardian theatre, and it is hoped there will be many more.  Their next production is the Pirates of Penzance, which is always a popular musical.

Scrooge: the Musical helps everyone get into the Christmas spirit.  The audience left the theatre with cries of Merry Christmas from Scrooge. By the smiles on their faces, the audience were already looking forward to it

Thanks you for your review, Jacquee. We’re glad you enjoyed the show. You were spot on with Jonny wanting to contrast Scrooge’s bleak existence with the colourful life of the other characters. We hope to welcome you or other members of the Sardines team to future productions. Best wishes, Paul.

Thank you so much for the review. Sanjay enjoyed it and I’m glad everyone enjoyed his song too. Jonny has done a great job. Well done to all the team.