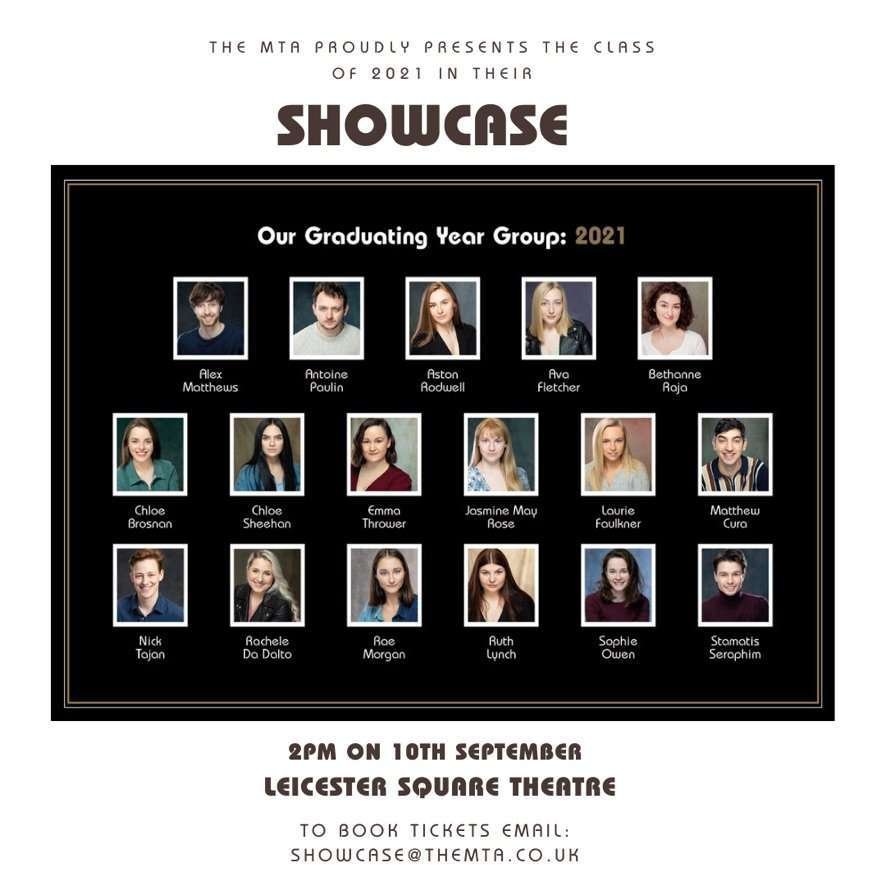 It is always a pleasure to see young people achieving and to enjoy the work of qualifying performers at the start of their careers.

Staged at Leicester Square Theatre (and live-streamed) this graduate showcase amply displayed the talents of its seventeen new “ambassadors” as The MTA, which styles itself “a college for life” calls its graduates.

Under Tilly Vosburgh’s inspired direction we got sixteen items in an hour-long show which meant that we saw each participant in at least one musical theatre setting and a “straight” one. Most colleges run their showcases with a single side-stage pianist or backing tapes. The MTA uses a live, centrestage three-piece band with principal Annemarie Lewis Thomas as MD on keys. She has also arranged the music. Such a band adds a lot to the quality of the work.

We started and finished with a whole company number. Both Be The Hero from Big Fish and The Goodbye Song from SMASH have a series of opportunities for single line solos – all delivered with tuneful energy.

The other fourteen items ranged from Mike Bartlett and Maxim Gorky to Godspell and Waitress. Everyone is an achiever but of course there were some students who really stand out. Stamatis Seraphim is one to watch, for example. He was disarmingly funny in New Boy (by Russell Lobey) as the teenager who hasn’t had sex, but yes please, would like to. And he packed lithe, infectious charisma hopping about in the hippy absurdity of Godspell. Antoine Paulin has a rare gift for stillness and active listening especially in Children of the Sun and he was slickly hilarious in Stuck Together (from Catch Me If You Can) with the much shorted Nick Tajan which was part of the joke. Their double act jazz singing was memorable too.

Bethan Raja as Isabel in Bull (by Mike Bartlett) is another visibly attentive listener and I liked the sensitive work of Sophie Owen as Rose in Di, Viv and Rose (by Amelia Bullmore) and in Like Breathing from Edges by Pasek and Paul. Her eyes flash very convincingly.

I wish each and every one of these twelve women and five men luck as they now seek professional jobs. The MTA has a history – every year since the college was founded in 2009 – of securing 100% independent representation for its graduates so I doubt that it will be long before we hear more of this latest cohort.