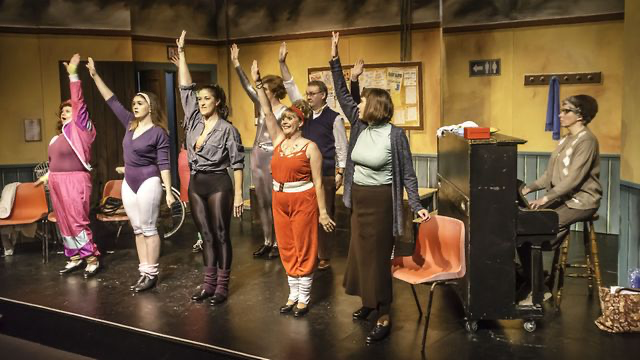 Show: Stepping Out – The Musical

Stepping out entertainingly into the limelight once again at Sheringham on Tuesday night was Cromer and Sheringham Operatic and Dramatic Society (CSODS) with this hugely enjoyable musical production, directed by Jackie Overton.

Written in the mid-1980s by playwright and TV screenwriter Richard Harris it follows a group of likeable misfits attending their weekly tap-dancing lesson. The group, led by the outwardly confident Mavis (Emma Galley), gradually reveal their foibles in a series of hilarious – and often touching – set pieces.

The production benefited from deceptively simple but extremely effective set design (Nigel and Brenda Holmes), effortlessly converting the small stage from church hall to wine bar to tea shop and back again.

Musical arrangement by Andrew Grey was first class and Carole Beatty’s imaginitive choreography gave a lie to the confined performance space. Lighting and costumes were spot on too.

The show was warmly received by the sold-out audience and the finale was greeted with huge cheers. A fantastic show once again from CSODS; broad yet poignant, funny and heart-warming.

Stepping Out – The Musical runs until 19 October. Tickets priced at £15.00 and available online at sheringhamlittletheatre.com or by telephone on 01263 822347.