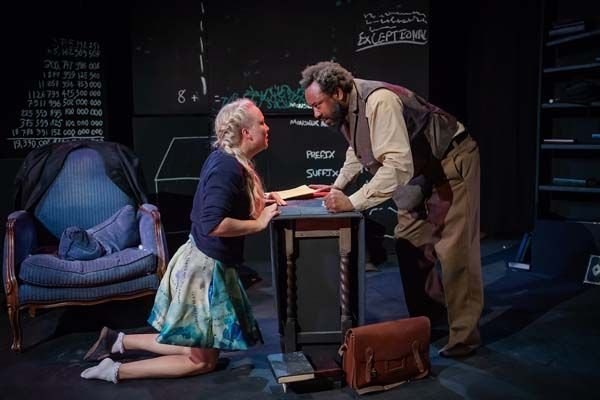 If theatre of the absurd is your thing then, obviously, Eugene Ionesco is your man. And I’m pleased to note that his 1951, one act, three hander play is in skilled hands with Icarus Theatre and its director, Max Lewendel.

We’re in firmly in the realm of mime, physicality and laughter when the unnamed pupil (Hazel Caulfield) arrives for her lesson in a state of giggly, enthusiastic glee. She sustains it splendidly through being invited in by Julie Stark as the dour, plain-speaking maid (a much smaller role) to await the arrival of Jerome Ngonadi as the begowned Professor, complete with mortarboard.

There’s a lot of humour in what appears to be the pupil’s very limited intelligence and her sudden arrival in mathematical infinity. Every nuance and facial gesture speaks volumes for both actors. We know something sinister is amiss, however, because the Maid keeps warning the Professor not to cover certain subjects in the lesson.

The situation gets ever more manic as it heads towards its macabre Bluebeard ending. All three actors are strong and there’s a powerful sense of essential cast bonding because you couldn’t bring off this fast-paced play without it.  But the real star of the show is Christopher Hone’s set. Because we’re in a plain French room there are a lot of wooden door cupboards. All of these are gradually opened to reveal chalk boards on which the professor writes, alongside the projected  lesson-related words and numbers which come in fast and furious from all angles – a metaphor for the tide of confused frustration rising to volcanic proportions in the Professor’s head. And amongst all this, every word of the text is projected, so the play is integrally, very neatly and almost incidentally captioned for people who need it. It’s a clever concept.

Donald Watson’s translation from French works pretty well although it makes nonsense of some of the Alice in Wonderland-type language jokes when for example they refer to English as if they weren’t already speaking it. It matters very little, though. It simply adds another level of absurdity – and that’s the whole point