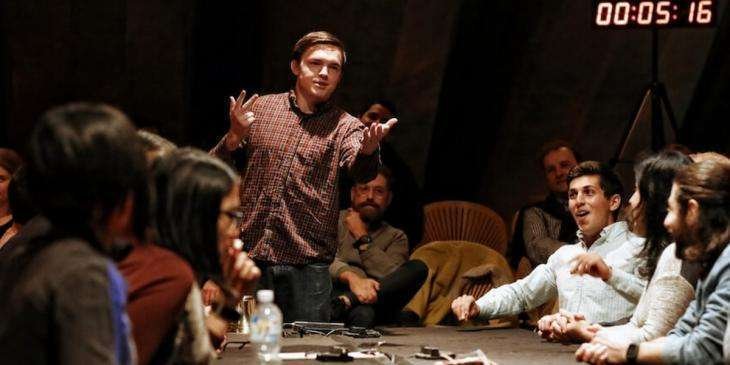 Expectations are important when it comes to a trip to the theatre.

For a conventional piece – a play or musical  – there might be excitement/curiousity/anticipation about the venue, the cast, the work itself. All fairly straightforward.

What to make of Kaleider’s The Money, promising us a type of immersive experience in which, over 60 minutes, a group of people decide how a sum of money should be spent? The decision-makers are members of the audience who have identified themselves as Players, investing £20 for the opportunity to join the debate about how the money should best be spent. Others, the Silent Witnesses, can only watch (for £30), with the opportunity to change their mind, becoming a Player to join in.

Be a part of the most memorable conversations to take place in London this summer, as altruism butts heads with personal interests, personalities clash and hierarchies are upended.

An entertainment that has a “worldwide reputation” must surely be worth seeing? But all sorts of other thoughts come to mind too.

Will it just be a sort of reality show with all the negative baggage that goes with that – a ragbag of egos, the alpha male, the one who can’t shut up, the politico, the one full of resentment, the nice ones and the quiet ones who never get a word in?

Will it just never take off – with the thought in the back of my mind, ‘If only I’d come on a livelier night”.

Or will it just be a bit of nonsense that leaves me wondering if the effort was worth it and, more to the point, could that effort have been used to a much better purpose?

I really wanted to be wowed by this ‘event’, held in the august surroundings of the old London County Council council chamber but ultimately I found it – as did a couple I spoke to afterwards, one attending as a Player, the other as a Silent Witness – underwhelming.

Admittedly not helped by sparse attendance, presumably due to Covid restrictions, The Money started with a facilitator opening a case which contained an envelope. The envelope was opened by the other facilitator and the money – just over £270 – emptied onto a wooden tea tray (which seemed rather incongruous given the grand gestures which accompanied it).

A facilitator then picked one of the dozen or so Players to take charge of the instructions. They made an unfortunate choice. The woman later said that she had been at the first night as a Silent Witness and felt that she just had to return as a Player. A lawyer – something she reminded us about several times during the next hour – she was not shy of giving an opinion but unfortunately this was rather relentless. I was not expecting a neutral chair but she seemed unable to sit back and listen for any reasonable length of time. It was, sadly, all about her.

After quite a lengthy discussion about what constituted ‘charity’  (a forbidden destination for the cash) a whole range of proposals was discussed ; buying books to create diversity in a school library (‘the leader’ found this idea too worthy but later made an offer to donate £200 to the school – her publicly-announced largesse duly noted), buying everyone a drink at the bar, hiring a limousine to take a centenarian out on her birthday, getting a graffiti artist to paint a school wall, a gift of the cash to a homeless person, giving the money to a wealthy person to see if they could increase its worth (to do what?) within the following seven days, putting it in a bottle and throwing it into the Thames, buying a Player a new carpet….. .  All discussed in quite an arbitrary way.

With the clock ticking down fast an idea which actually got a bit more serious consideration came up. Pick a Player at random, choose a number from their mobile phone book, ring it, then ask what the person at the other end would do with over (by now enhanced by new Players) £300 . If the Players approved it would go to that person. This effective opt-out fell apart when the first person chosen did not answer their phone and there was a problem with the second number. (Like some other exchanges, in spite of microphones, it was not clear to me what had actually happened since, unsurprisingly, the Players often talked among themselves.)

Then, with 5 minutes or so left, an angel appeared in the shape of Leah. I guess around 12 years old, dressed in white, she rang the big bell and popped £20 onto the stage necessary to make the transition from Silent Witness to Player and declared that her friend had a birthday on Sunday and that the money would enable her single mum to give her a really good time.

Manna from heaven! The suggestion was no better than any others but with about 2 minutes left, the form needed to be signed by all Players to show their unanimous agreement  to this proposal. Completed just before time was up it was passed to the facilitators for checking. There were 16 Players….but only 15 signatures. Leah had not signed! The money would be carried over to the next show. Groans all round – followed by a collection for Leah’s friend.

Bizarrely, everyone in the audience was then offered a drink to round off the night. (I imagine this, together with the 15 minute delay to the start, makes it possible to claim that the show is 90 minutes long. The show itself lasts 60 minutes.)

Frankly, on the night I attended, The Money had just about enough interest to keep me in my seat for the hour it lasted and from my point of view there was a whiff of cynicism about the whole thing. (If professional actors are involved as ‘planted’ players – and I couldn’t identify any characters that might be – they did a poor job of bringing this turgid event to life.)

I can imagine that in a packed room on a Friday night (the sort of atmosphere the show would have at, say, the Edinburgh Festival) sparks might fly and the hour would pass in a trice but was my experience the “memorable conversation” promised by the promoters?