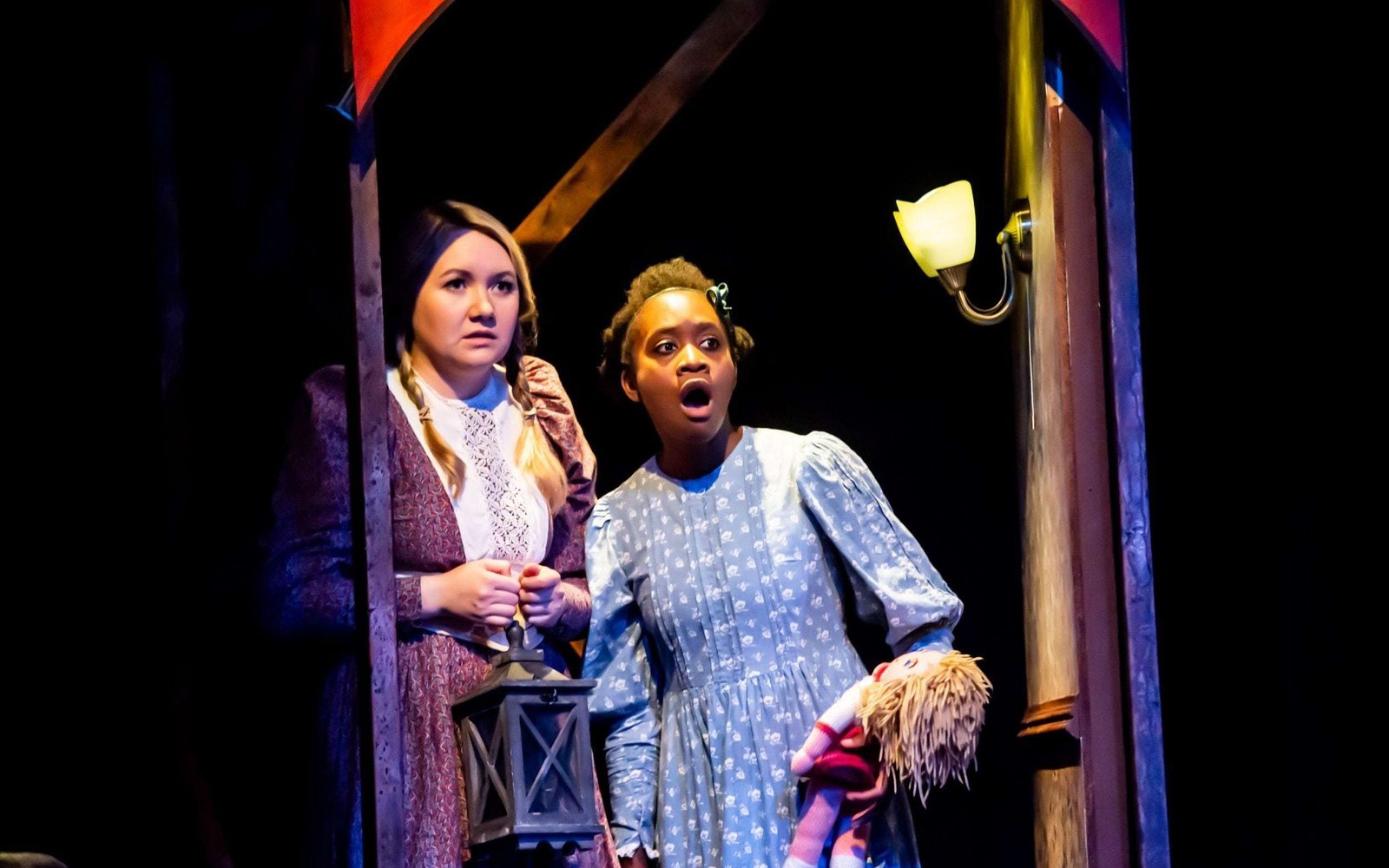 Show: The Wolves of Willoughby Chase – and – Pinocchio

The Wolves of Willoughby Chase

The second of the two summer repertory productions for children at Greenwich Theatre is The Wolves of Willoughby Chase, a much less well-known story than Pinocchio but posing just as many difficulties for writer and director. Joan Aiken’s novel has been adapted here by Russ Tunney, with a cast of 7 playing at least 16 characters, sometimes more than one at a time. This becomes something of a running joke (slyly signposted by the opening announcement) and it is this jokey tone that is the making of the piece, and at no detriment to the story.

Director James Haddrell keeps the action moving at all times and conjures up something of the feel of this dark and wintry novel, despite the colourful set elements which seemed at odds with the story. The set, which worked so well for Pinocchio, was largely unchanged apart from a few flats, and would have served the purpose well if the brightly coloured strip above the stage and the coloured flourishes above each arch were removed: the remaining track-like element and skeletal framework would have provided a much more appropriate background.

This was, however, my only reservation and as a newcomer to the book, I enjoyed the production as much as some of those around me who were clearly fans of the novel (including the initially sceptical young girl who took one look at the poster as she arrived at the theatre and announced that the windows in the house were the wrong shape…).

Alice De-Warrenne is a feisty Bonnie and Cassandra Hercules is appropriately restrained as Sylvia, a nice contrast to her very different performance in Pinocchio. Serin Ibrahim, in a trio of roles, provides much of the comedy, especially as the gormless Mr Grimshaw. Adam Karim does his best with the rather wet goose-boy Simon but is much more successful and amusing as the valiant James, helping to rescue the girls. David Haller contributes much in the way of musical accompaniment and songs, and his compositions greatly assist the narrative flow of the piece. The cheese alphabet song deserves to become something of a standard! Reice Weathers has to play even more roles than everyone else, but does so appropriately broadly and with a good sense of character (at one point even channeling Stanley Unwin, a name probably unknown to him).

Finally, in his element as Miss Slighcarp, Anthony Spargo commands the stage and provides much amusement for the adults in the audience as well as the children. As a regular pantomime performer on this stage, Spargo knows exactly how to get the best from his role but never at the expense of the other actors. In fact, his double act with Ibrahim’s Mr Grimshaw has the makings of an excellent baddie plus sidekick pairing in a future panto.

The play hurtled towards its conclusion with a satisfying group narrative and a reprise of “Once upon a time that never was.” Metatheatre for young children is quite a trick to pull off, but Greenwich have done it very successfully. The Wolves of Willoughby Chase deserves full houses and runs to 5 September, in repertoire with Pinocchio.