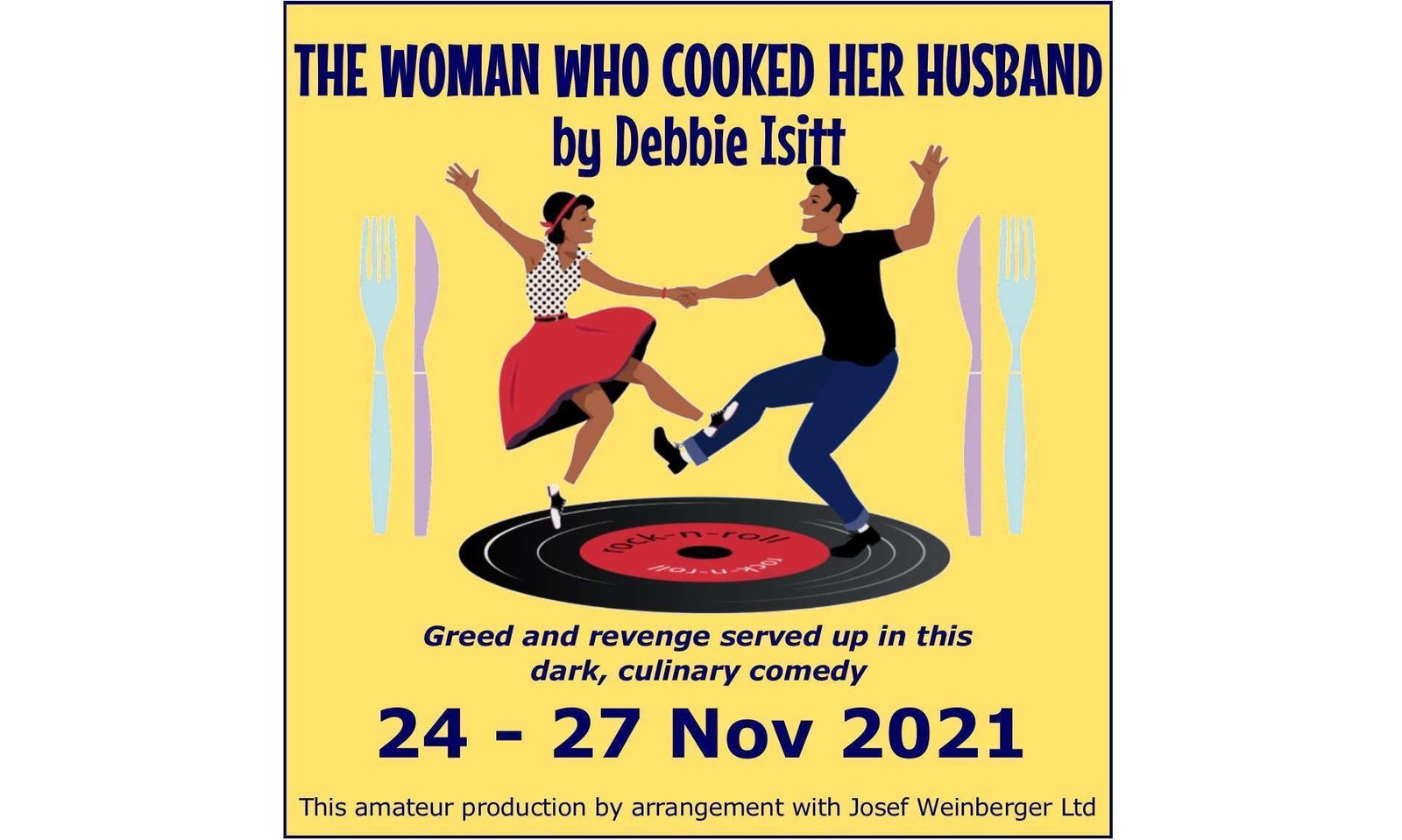 Show: The Woman Who Cooked Her Husband

The Woman Who Cooked Her Husband

A Gourmet Offering from BCP!

Banbury Cross Players are back in business with a bang.

Not content with presenting us with The Woman Who Cooked Her Husband the Players gave us a pre-play Cabaret to set the scene. Partly because of the need to keep distance in line with Covid precautions but also setting the scene the first night full house I attended is set out in tables of six with 1970s-style entertainment provided by some very good young dancers and an entertaining Elvis impersonator/compere in the shape of David Smith. while waiters circulate the room taking orders for drinks.

The link with the play (originally produced in 1993) is that Kenneth and Hilary are a couple who would have enjoyed many an evening ‘down the club’. After 19 years of marriage they now ‘get on’ but not much more than that. He brings home the money and she looks after him, providing a tidy house and good food every day. Probably also at the club Kenneth meets the much younger Laura, who offers the sex which is lacking in his marriage but who is a complete failure on the homemaker front. Kenneth and Laura’s affair goes on until his denials, lies and wounded innocence at home no longer work – most notably after Laura visits Hilary in desperation to tell all.

Intriguingly, the first time we see them is at Hilary’s where she is hosting a dinner for Laura and Kenneth who have been married now for three years. While the host is calm and collected the couple are far from comfortable – mainly because the occasion reminds them that their partnership is less than happy. Kenneth looks forward to one of Hilary’s great meals, Laura wants to go home and an uneasy peace reigns.

All three actors in this piece have to work very hard on a sparse set with minimal furniture and, I think, one prop, to make it believable. They do – and it is.

Central to the story is Hilary, played by Linda Shaw. Totally confident as the houseproud, sensible and organised housewife with an accent as Scouse as the Liver Building Linda carries off her part with aplomb, whether it is sorting out the evening’s dinner before Kenneth went to work, her spirited cross-examinations about why he was coming home so late or her increasingly uncertain disbelief and defensiveness at Laura’s revelations about her husband.

It can be argued that Debbie Isitt’s play is a bit of a period piece and that men like Kenneth don’t exist any more but Andy Parson’s portrayal of a lying, conniving and selfish character leaves little in doubt that they do. His quiet but palpable disdain for Hilary, his lusting after Laura followed by his swift disillusion with her, totally convincing.

Laura is an another interesting character. It is her youth that appeals to Kenneth but with that comes a different view of the world to his – she doesn’t feel she needs to be the ‘complete package’ to please her man. And her relationship with Kenneth is failing because she isn’t. Zara Walton made the very most of this part, providing the sensuality Kenneth initially seeks, followed by hurt when this is not enough but finally throwing their partnership back in his face. A modern girl, too independent to be the drudge Hilary became.

The play has pace and rhythm – especially enjoyable is the ‘scene’ in which Hilary and Kenneth’s days are played out in increasingly fast routine-bound order – and monologues/silioquys were clear and well-spoken. Accents were convincing and consistent and I enjoyed the use of mime, which enabled the cast to concentrate on acting rather than managing props – a good decision. This is a very wordy play and, with just two or three first night fluffed lines and one prompt, only a pedant could complain.

Linda, Andy and Zara are each to be congratulated on their excellent performances.

Performed on a simple set with appropriate costumes, good lighting and a clever use of music this is probably the best show I have seen in the several years I have been reviewing Banbury Cross Players. Well done to Director Chrissie Garrett, her cast and crew.