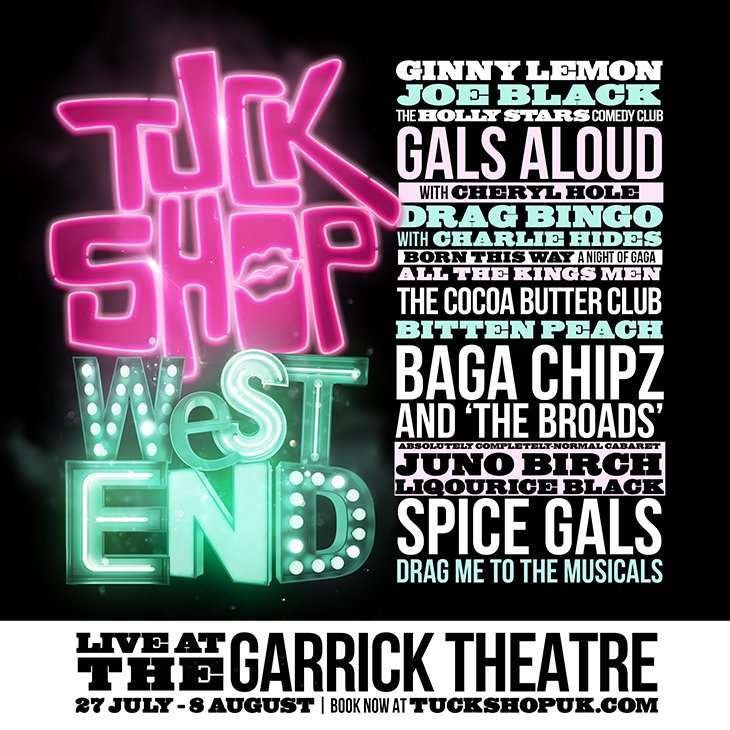 Show: Tuck Shop West End – Drag me to the Musicals

Tuck Shop West End – Drag Me to the Musicals

Men dressing as women is not a new phenomenon. Danny La Rue, Lily Savage, Dame Edna –  they have been names well known by everyone for many years. We are also very used to extrovert, over the top panto dames. I guess the main difference now with drag performers is the realism with which they design their costumes and perform. Many intrepid traveller returned with awkward stories of Far Eastern ladyboys but nowadays there are truly some performers that might make you look twice. I’m not going to get into the the psychology or motivation behind it all but suffice to say drag is here to stay. Ru Paul has no doubt helped its segue into mainstream entertainment and the ongoing popularity of Ru Paul’s Drag Race with all ages, genders and orientations means theatre companies like Tuck Shop will become more commonplace.  Imagine ten, twenty years back having a drag performance in a West End theatre. Times have changed,  and for the better.

Drag Me to the Musicals was the last in a series of performances from Tuck Shop at The Garrick. As the name suggests it was a night of musical numbers by leading drag performers. These ladies are a bit like musical theatre stars –  they are all-rounders: singing, dancing, acting; not to mention makeup and costume. If you’ve watched Drag Race, you will know they have to turn their hand to a lot of skills.

In this COVID restricted time (first time in a theatre for over 18 months – and have I missed it!), there are no programmes still and my ageing memory cannot remember who sang what, so I’ll applaud them all generally. Also knowing one of the cast, I wouldn’t want to be accused of favouritism or nepotism!

I loved it all – the cheeky banter, the filthy insinuations, sparkle, silicon and so much more. If you love musical numbers,  you’re unlikely not to love this show. A bit of glamour and entertainment after months of Lockdown drudgery is just what we all need. Some costumes were better than others, some sang live, some mimed. None of it mattered.  It all made the audience cheer and everyone was on their feet for the unsurprising surprise encore.

If you’ve never been to a show with drag performers,  give it a go. I truly believe they might take over from panto dames (as long as they can reign in the filth for family performances) as the former seem rather dated these days. With even queen of the dames Christopher Biggins edging toward retiring his wigs and heels, their days must be numbered. Theatre is constantly evolving and as we approach a society where LGBTQ+ gains its rightful place, drag performers provide a delightful bridge from old to new and a comfortable window into a different but everso exciting world.

If you don’t like musicals or sparkles,  this probably isn’t the show for you.