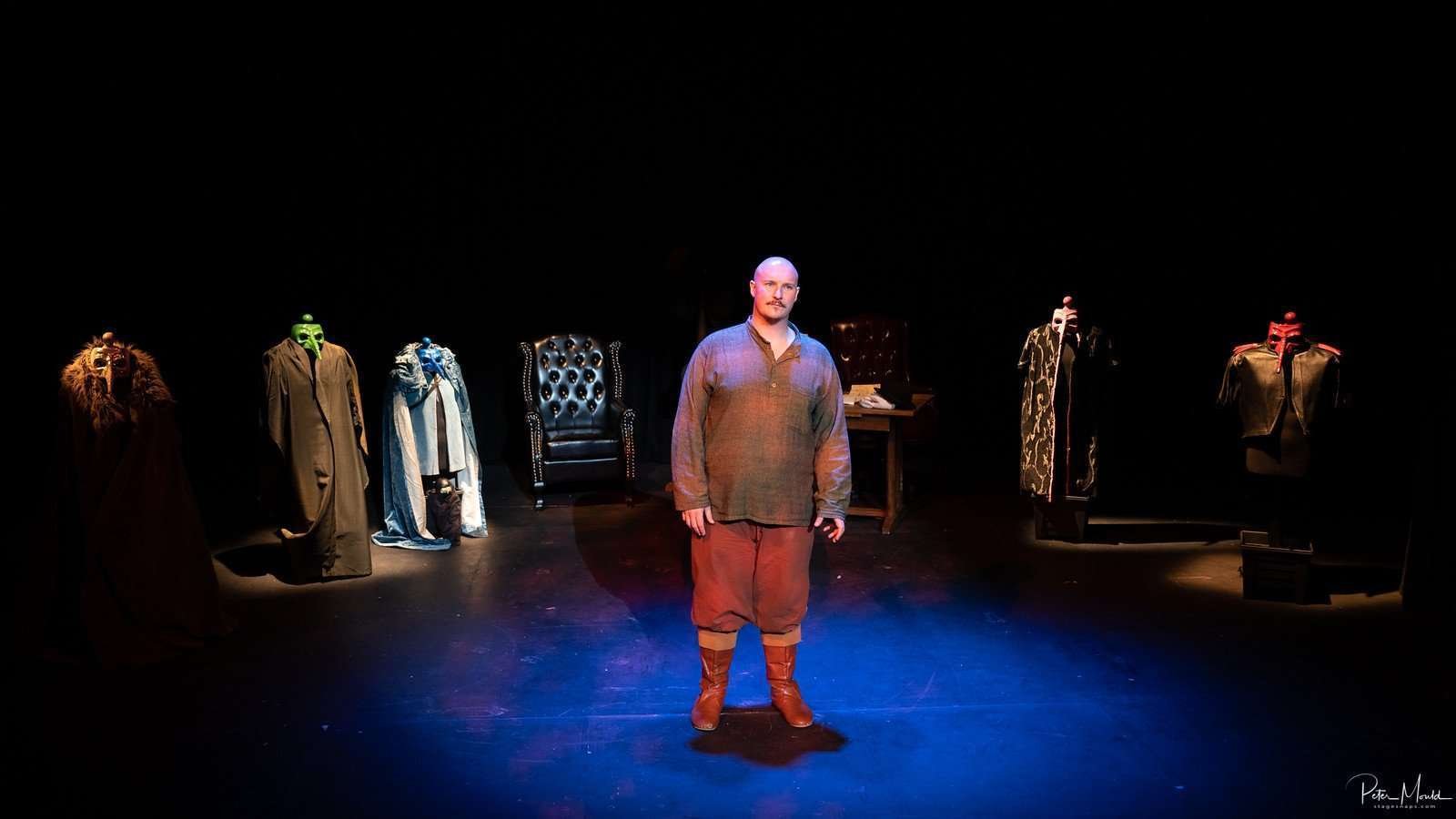 Stephen John founded the local company in 2013 with the ambition to perform the entire cannon of William Shakespeare`s prolific output of work. To start a theatre company would have daunted many a man, but not Stephen. He directs, acts and runs the company. At the conclusion of this evening, momentarily his voice appeared to break with emotion as he, in effect, pleaded for the audience to support `live` theatre. This was quite touching and in contrast with the voice he had sustained alone on the stage for two hours (plus an interval). His diction, training and passion for the subject all shone through in the final performance of this production, which came about due to the pandemic. Variations on the title will be presented in the future but not in this complete evening format. The decision to present this one man show avoided many risks in casting and costs. All previous performances have been presented open air at the Half House Farm, Hastings, again risk with the climate but a good option in the current circumstances.

The audience took their seats, viewing the open set, dressed with dummies draped in costumes and topped with colourful masks, Two fine chairs and a coat stand with bowler hats completed the scene. At this venue, an ideal size for this show, good use was made of the available lighting under the direction of Chris Packham (C Packham Events Ltd).

The presentation is at once mobile and adaptable to many different venues which has been a hallmark of the company. It is indeed a brave man who takes to the stage alone and presents himself. In some performers this might well be an ego trip and not without risk if the material or performance was below par, it would fairly quickly pall and maybe falter. It is no easy undertaking to engage with an audience and then ‘hold’ them for an evening, that this succeeds is a mark of the quality of the presentation. Shining through is the high level of acquired knowledge, research and with the real ability to communicate his absolute passion, well expressed with a great & clear voice, impeccable diction, mixed with odd moments of somewhat ‘quirky’ humour. Stephen has selected speeches to perform and uses items of costumes to assist in this. We learned of the enduring influence of the language of plays and sonnets over the centuries. Also explanation of the genres to which our modern tendency to categorise pieces of work and the idea was put forward that the plays were relevant to the times in which the author lived. Attempting to play many different characters is difficult when the speeches are being heard outside of the plays themselves, the inherent danger is to exaggerate the characteristics for the sake of difference. However, as this is not a performance of the play and is as much a lecture, a showcase for the company`s commitment and an advertisement to secure future engagements, it is accompanied by a well produced new brochure, issued to audience members. Time marches on and it was under a new guise Stephen took to the stage, gone are the flowing locks and instead a shaved head and moustache, it made donning hats easier. Stephen clearly has a very bright future and will build on what he has achieved so far, plans are in progress for a full programme for 2022. Stephen is an educator, actor, director, impresario, producer and with numerous references to books on the author, it can only be time before he emerges as a published author. There are also plans to move on to other playwrights. This may well be a wise move as no matter how much one loves a particular author or part of the arts, there is too much that might be missed & absorbed and related back to the original playwright. if a too narrow focus was locked forever. I did feel that just occasionally, even momentarily in odd moments the actor might have been helped with the right director just suggesting ideas. I almost immediately have rejected this notion as if you tried to change this one man “Shakespeare obsessive” as he describes himself, something may well be lost. In his boots, smock and loose ‘trousers’, as he left the stage , I imagined him strolling out into the night air and onwards with a cart to an ale house and bed of hay and as the sun rose… this strolling player tramping down lanes and the next night regaling a new audience with his tales and knowledge, for as the lights shine and it is time to emote, the sap will rise and the blood will course as the passion emerges.

Since last night and reflecting on what we saw, I keep thinking how effective this would be as a Radio 4 programme in maybe four segments. Good luck for the 2022 & beyond.