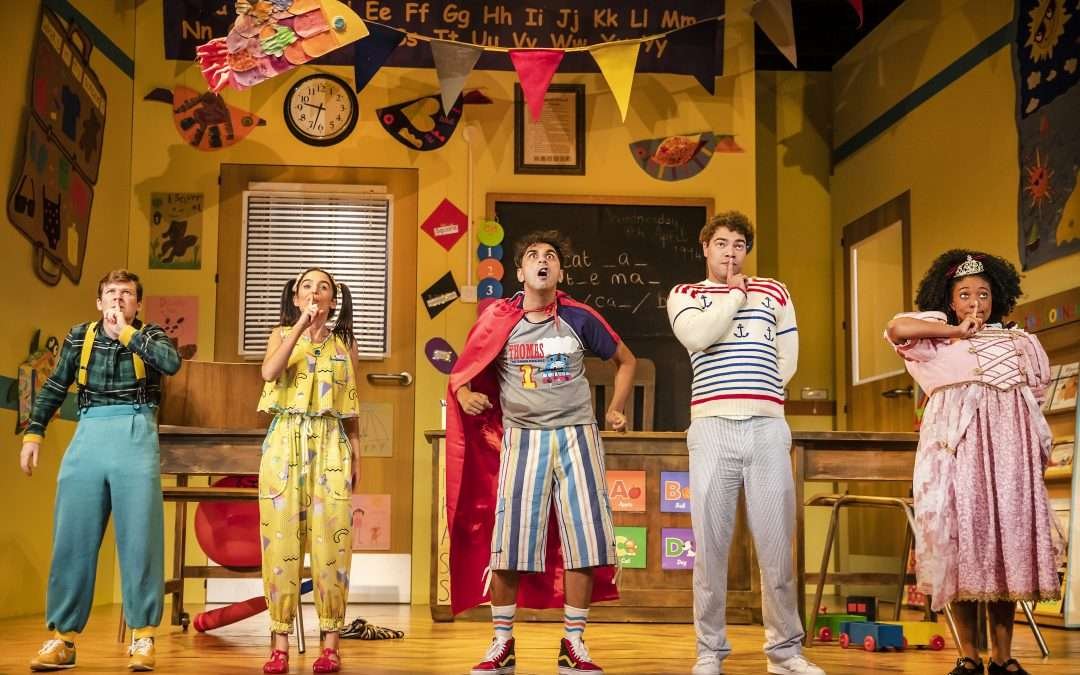 I’ve long been a fan of Mischief Theatre and their, erm, mischievous brand of theatrical humour ever since I watched the BBC One screening of their family show Peter Pan Goes Wrong in 2016, crying with laughter as sets fell apart and lines were misremembered. I’m proud to say I’m firmly in the Mischief fan club, having seen nearly all of their work, but I was intrigued to know if their winning streak could continue with Groan Ups, a show that seemingly isn’t intended to go belly up?

I wasn’t overly familiar with the plot of Groan Ups before sitting down at the Mayflower Theatre and was admittedly wary about this change of course for the company. I also have a strong aversion to adults playing as children and wasn’t sure how much of this I’d have to endure. Was the writing of Henry Lewis, Jonathan Sayer and Henry Shields strong enough to hold up over two hours without relying on the visual hilarity of a production falling apart? And for how long would I have to put up with grown adults infantilising themselves?

Thankfully, I needn’t have worried for a moment. Groan Ups is a very different beast from their other output but there are still a few trademark elements on show that make this a Mischief production.

The show opens in a primary school with five children from Yellow Group telling us about their weekends. The writers’ clever use of wordplay goes into overdrive, with the children innocently repeating the very adult phrases they’ve learned from their parents. A short bit with a mop particularly sticks in the mind but to say more would give away the joke.

From here, the curtains open and we’re met with an oversized classroom designed to dwarf the actors. The set from Fly Davis is brilliant – chairs too big for the children, oversized books in the corner, everything was pitch perfect.

A relatively quick scene change is covered by some government-mandated awards for everyone in the school before we then join the kids nearly a decade later as teenagers, on the cusp of entering Year 10 subject to passing their end of year exams. It’s the same room but scaled-down, sneaking in to drink blue WKDs and a bottle of contraband alcohol. After the interval, we meet them all as adults at a school reunion, highlighting the impact school life can have in shaping a person, for better or worse.

As with all Mischief shows, the founding company members originated the characters and I was keen to see how other actors in their shoes would fare. I’m very pleased to say the cast of seven are all fantastic and it would be impossible to single out any of them for praise more than the others. The central five in particular were superb, holding together each and every scene, sometimes at a very fast pace.

Unlike other productions by the company, there was a lot more heart and poignancy than I was expecting. From Archie battling his inner turmoil to the effect banter/bullying had on Simon through to Spencer’s wrong turns, the three main male characters possibly take the biggest emotional journeys in the show, perhaps not surprising given the gender of the writers. That being said, it was fun to see how Moon never really matured as she got older, and how driven Katie was for making something of herself. The romantic triangle of Archie, Spencer and Katie gives the play its emotional core and it was refreshing to see this usually frolicking company tackle some bigger issues.

That’s not to say there weren’t frolics to be had! Spencer’s increasing exasperation in the second act with replacing the class hamster stands out, with Dharmesh Patel delivering a brilliantly frantic performance.

My only criticism of the play is that some of the language used by the characters at their youngest wasn’t overly believable – they made for great puns and clever use of language but at times it felt the writers were trying to be a little too clever. And as magnificent as the set was, the whole of stage right was masked by a giant black curtain stopping us from seeing one of the walls – we knew the wall contained a window but we couldn’t see it. Being sat in almost in the centre of a front row and not being able to see one of the walls does make me question how good a view the rest of the auditorium had.

However, these are minor quibbles over what was a hilarious performance and another brilliant production from the hitmakers, albeit one with more genuine character work and emotional depth than they’ve previously shown us. Much like the characters in Groan Ups, perhaps Mischief are beginning to show a little more maturity? Or maybe they too will regress into silliness again – either way, I’ll be watching. 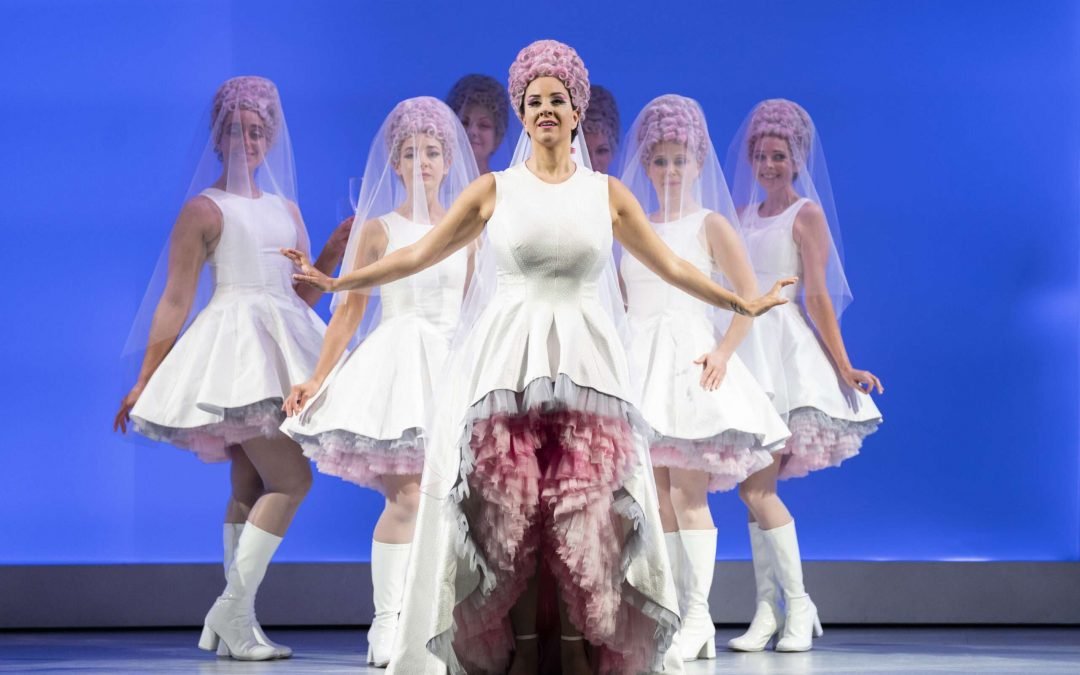 This is a new production of Puccini’s opera, a troubling piece in any age but which highlights issues which make it very current to modern eyes. This opera dissects and displays the privileged white males’ attitude in foreign countries, where girls are treated as commodities to be sold to the highest bidder for as long as they want to keep them and are then discarded. Butterfly, a young girl from a family thrown into poverty, still dreams of escape through her ‘marriage’ to Pinkerton. She wilfully or wishfully refuses to accept that it is not worth the paper it is written on and is convinced she can become a true American bride. Pinkerton, of course, makes it apparent from the outset to everyone except Butterfly that he wants her for her body and skills at pleasing a man.

Attempting to avoid the pitfall of criticising Japan, this production is set in some sort of futuristic country. It is impossible to avoid the references in the libretto to Japan but we are in a white world with largely pastel colours. The costumes look like they have been borrowed from a 1960s episode of Star Trek, except for Butterfly’s wedding dress which has an open front over many layers of bright pink frills making her look like a head on top of a giant vulva – doubtless to emphasise how the other characters see her, particularly Pinkerton and the sleazy ‘marriage-broker’, Goro, (Tom Randle). Horrifyingly, at fifteen, Butterfly is close to her sell-by date (already losing her looks according to the catty chorus). The first age guessed for her at the wedding is just ten.

The centrepiece of the show is the stark white house on two levels, the only room of significance the sparsely furnished bedroom. This is accessed through stairs and passageways which enable cast to go out and reappear from elsewhere, especially as the house rotates so we can see into the bathroom and kitchen. It feels somewhat as though Butterfly is trapped in an Escher drawing.

The singing is, of course, divine, as one anticipates from the WNO, and the production is slick but rather failed to engage me in the actual characters in the first Act. Pinkerton, played with unpleasant charm by Leonardo Caimi, refuses to heed the warnings of the consul, Sharpless (Mark Stone). He is one of the two sympathetic characters in that first half and is played with sincerity, although his helplessness in the situation chafes. The other is the faithful maid, Suzuki, (Anna Harvey), whose attempts to support and protect her mistress are ultimately unsuccessful. One dreads to think what her fate will be after the dreadful denouement of the piece.

While beautifully sung by Joyce El-Khoury, I did not feel Butterfly’s fragility in the first act. This was partly because the character feels more powerful in that act. She has thought through how she will proceed, going to the lengths of changing her religion, knowing this will lose her the support of her family but hoping it will help to secure her future with Pinkerton. It was also partly because of that dress which makes it difficult for the audience to see past the male assessment of her.

In the second half we see her and Suzuki living now in squalor and penury. I particularly liked the touch of Suzuki’s pink hair growing out. We learn the rent has been paid by Sharpless, they believe with money from Pinkerton but one wonders. However, there is no money left. Butterfly remains convinced that Pinkerton will return and save her and the son she has given birth to and raised in his three-year absence. She resolutely refuses a second marriage to the wealthy Prince Yamadori (an engaging Neil Balfour).  The most poignant section is when Pinkerton’s ship is finally sighted and the two women and the child, endearingly played in a dinosaur onesie, try to decorate the house for his expected return and then Butterfly maintains a vigil through the night, waiting for him to appear. Here, the wonderful orchestra, conducted by Carlo Rizzi, come into their own as the lighting takes us through the night and to the dawn.

This production is part of the WNO’s tour through England and Wales, which extends through to May 2022.