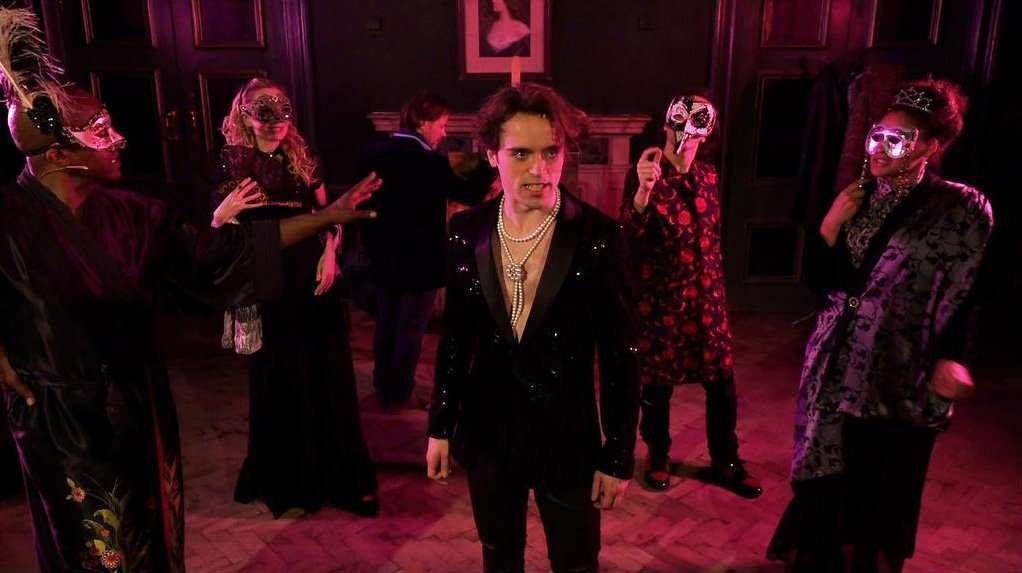 There have been many film and television programmes based on Oscar Wilde’s The Picture of Dorian Gray, several operas, a ballet and at least one musical, so Dorian: A Rock Musical is revisiting familiar material. In Wilde’s Faust-like novel, a character sells his soul for eternal youth, so that only his portrait ages and shows the effects of his dissolute lifestyle. Described as a digital glam rock musical, Dorian: A Rock Musical is a Ruby in the Dust production and available to stream until Thursday, 12 August.

The musical keeps the main characters from the novel but changes the central character, Dorian Gray, to a rock star who is soon under the spell of a charismatic but dangerous music impresario, Lord Henry. Also surviving from the original novel are Sybil Vane, the talented actress whose love for Dorian destroys her, Basil Hallward, the painter of the portrait and Lady Henry, the spurned wife of Lord Henry. The time period during which the painting ages has also been changed from 18 to 10 years, weakening the extent of the presumed transformation.

The show is composed by Joe Evans and written and directed by Linnie Redman. It was originally planned to run at The Other Palace but was overtaken by events; the streamed version has been filmed at an undisclosed location in Mayfair. It has quite a low-key beginning with a young man singing a rock ballad to a photo in a frame before he is joined by a woman who has just been to a funeral. We don’t know who they are of course so they helpfully remind each other; not a convincing beginning for the book of the show, too often, as here, the weakest part of a rock musical.

Production values are quite high, with the piece filmed in an evocative setting, and the regular rock numbers are well played though not very varied, and come over much more effectively than the dialogue, although they are often quite declaratory: this is very much an actor musical rather than rock musicians acting. Costumes are vaguely modern but sometimes a little perplexing, with Lord Henry’s sleeves almost as distracting to the viewer as they seem to be for him. And the central challenge, how to show the ever-aging picture, is dodged completely, apart from a brief glimpse as it is hidden away and again when it is revealed at the end after Dorian has stabbed it offstage and then reappears bleeding but not noticeably aged.

The cast sing well and do their best with the dialogue and some of the lyrics. The jaunty upbeat songs seem at odds with the piece and are often curiously unlike a rock musical. They sometimes seem more like patter songs and call out for choreography. By the time we do get some choreography, for Lady Windermere’s Fan Dance (no, really) we seem to have entered a different universe from that of the modern rock musical, with so many of the numbers seeming like the jolly number that lightens the mood in the middle of the show: it’s a bit like watching Superstar but Herod is singing all the songs. It’s not only Lady Windermere that has wandered in from another Wilde play; we get more of the famous aphorisms and even a song based on Lord Alfred Douglas’ poem about the love that dare not speak its name.

The cast are mostly good and can cope well with the musical demands as well as rising above some of the more clunky lyrics that include rhymes like “corner” and “warn ya” or dialogue like “life is an illusion, a shit illusion.” Johanna Stanton, in particular, turns in an impressive and heartfelt performance. Fia Houston-Hamilton makes an effective Sybil Vane and becomes the focus of the narrative rather more than the central conceit of the painting. As Lord Henry, John Addison works hard but struggles with much of the dialogue he has been given, and does his best with a faintly embarrassing bump and grind rock number with a girl trio.

Bart Lambert gives Dorian everything he has and is never less than fully committed. Tristan Pegg convinces in a minor role and Sophie Jugé works hard as Mrs Leaf and a number of other characters, and also has the immortal line “I can’t get used to that doorbell” after a particularly inappropriate sound effect. The best performance is that of Lewis Rae as the artist Basil Hallward. He knows how to bring commitment to a role where the script may not be helping, and he is always watchable. He is eventually stabbed by Dorian accompanied by more interpolated quotes, this time from the Ballad of Reading Gaol with each man killing the thing he loves.

After some ghostly reappearances from those he has killed, Dorian eventually attacks the portrait, destroys it and inherits the aging that he had avoided. In this production that dramatic denouement happens mostly offstage before a low-key epilogue with Lord Henry holding Dorian in his arms.

Tickets for Dorian: A Rock Musical can be purchased online at https://www.stream.theatre/season/127 for £15. 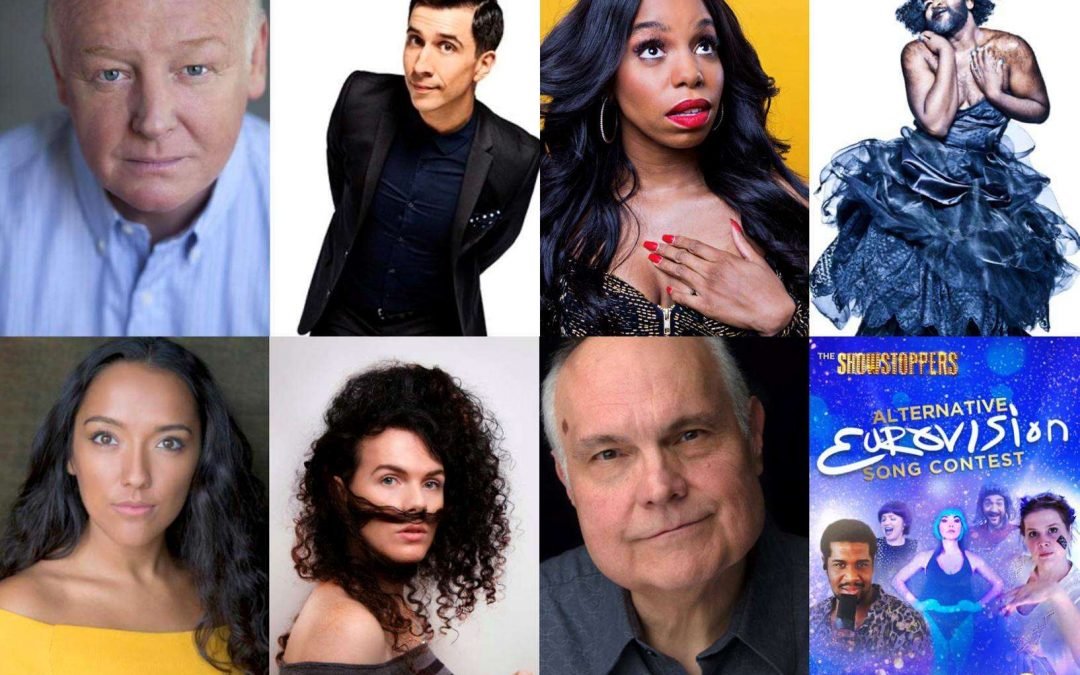 At a time when many of us are perhaps tiring just a little of streamed rather than live performance, and with the real thing tantalisingly just round the corner, it was quite a challenge for the Showstoppers team to top their 2020 Alternative Eurovision with an even better version – but they did it of course. This talented group threw everything at the project, mixing live improvisation with carefully crafted inserts and wrapping the whole thing in an interactive structure which allowed the online audience to vote and donate to charity along the way. Tickets for the event were free, but voting required a donation, with all profits going to the Care Workers Charity.

From the beginning, when we met hosts Pippa Evans and Andrew Pugsley, ably backed up by their resident Euro-statistician Tony Cordial (Philip Pellew), it was clear that this was pitch-perfect parody. The national entries were just as good (or bad) as the real thing, with opening act Marti and Marta from Austria providing a perfect blend of yodelling, lederhosen and silliness. The following acts were mostly provided by the talented Showstoppers team (14 of them), though with a few guests like Mike McShane, with his moody Icelandic offering.

These were no quick Zoom videos either, but fully costumed and with deft effects all too reminiscent of the cheesy national videos in the real thing. It was all here, especially the archetypal slow start followed by a key change and up tempo section, and some truly bizarre outfits. Each act was introduced by guest comperes Marcus Brigstocke and Rachel Paris, and at suitable intervals, celebrity guest judges like Russell Kane (or his impressive alter ego), Le Gateau Chocolat, London Hughes and Les Dennis added their comments: and that’s quite a bill.

Although Marti and Marta were archetypal Eurovision, and indeed took an early lead in the voting, there was much more to delight in, including the intense Heimlick Maneuver from Germany and the unforgettable Nana Novakovakova from the Czech Republic with her faithful penguin. My vote went to Basta di Pasta from Italy but the final voting saw a number of favourites battling it out to win the public vote and the votes from each country, with the final winner being the Latvian duo with their ode to Fish and Chips, just beating Sweden and Germany.

With 10 musicians involved as well, this show had higher production values than some newly-reduced West End musicals – no sign here of anyone looking to save money by reducing numbers. Interval entertainment included a performance from last year’s German winner, and an update on the sad tale of Bim the puppet, who has had a hard time…

From time to time, we were taken by Zoom to the Green Room to eavesdrop on the contestants and their discussions, sometimes rapidly disconnected when feelings get too strong. It was a mark of the care given to this event that this was no simple Zoom link but a carefully crafted simulation with some sneaky in-jokes in the pop-up chat.

The whole event was live-captioned and was conceived and directed by Andrew Pugsley. A great way to spend a Saturday evening; now let’s look forward to seeing this talented group back where they belong, performing live in a theatre, which they will be doing from early June (details on their website).