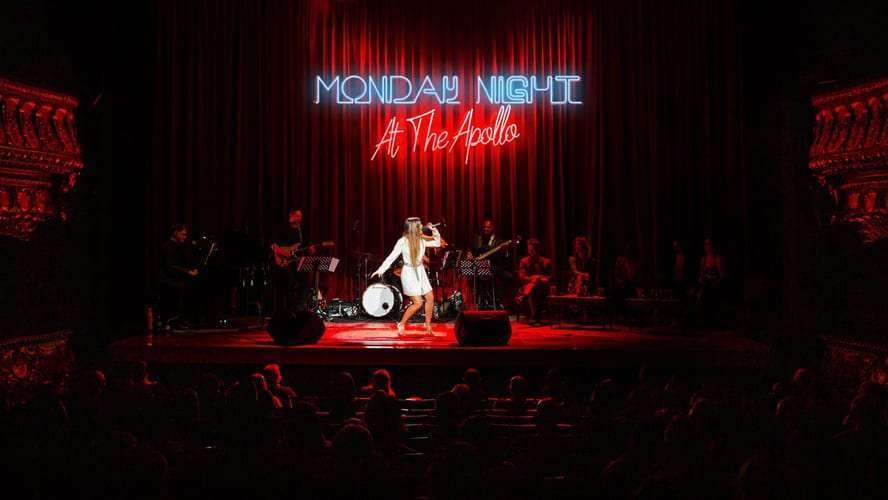 MONDAY NIGHT AT THE APOLLO

The star line up has been confirmed for the second concert of the series for Monday Night at the Apollo – which will be performed in front of a socially distanced audience at the Apollo Theatre on Shaftesbury Avenue on Monday 14 June, and simultaneously livestreamed to viewers at home via the theatre discovery platform Thespie, which is dedicated to bringing the best live and recorded theatre to audiences around the world.

Shan Ako (Les Miserable, Xfactor), Arthur Darvill (Once, Doctor Who), Sophie Evans (Wicked, Wizard of Oz) and Sandra Marvin (Waitress, Emmerdale), featuring ovation worthy performances of songs from their favourite genres. Host Greg Barnett (Miss Littlewood, Swallows and Amazons) invites his audience behind the curtain to catch these castmates as you’ve never seen them before. Sharing their most cherished memories and experiences from their careers, alongside performances of music personal to them, West End royalty celebrate the craft and industry they’ve so dearly missed.

Monday Night at the Apollo has been conceived of to support the theatre industry, and a percentage of profits will be donated to Acting for Others, an organisation made up of 14 individual theatrical charities.

Tickets are on sale now for all three concerts: Monday 24 May, Monday 14 June and Monday 5 July. The producers will continue to review each date as it approaches and react according to government guidelines at the time. Aimie Atkinson, Cassidy Janson, Lucie Jones, Cedric Neal and Julian Ovenden have been confirmed for the first concert, and the line up for the third concert will be announced soon.

Producers Greg Barnett and Hugh Summers said, “We’re excited to be announcing the second of our all-star line-ups for ‘Monday Night At The Apollo’.  We have five of British Theatre’s best performers joining us for this night to celebrate the re-opening of our wonderful industry and we simply cannot wait for them to be out on stage, sharing their talent, in front of a live audience. We are thrilled that all three performances will also still be live-streamed to viewers at home via Thespie.com. The industry faces huge challenges in its recovery and we still hope to be able to raise funds for the charity ‘Acting For Others’ to support the thousands of freelancers who continue to be hit hardest as our sector begins to slowly reawaken. Theatre and its audiences know how vital it will be to support each other on the road to recovery and in these seemingly crucial final months, we ask your support, kindness, and most of all your theatrical presence, as we embark on our journey back to the stage. Public health and the safety of our audiences are still our utmost priority and the performances will adhere to the current government guidelines.”

‘Monday Night at the Apollo’ is part of ‘Rising Stars Festival’ headed by Nimax theatres, showcasing the work of 23 producers making their West End Producing debuts.

“If these enterprising young producers are the future of the West End, it’s looking good” ~ Nica Burns – Nimax