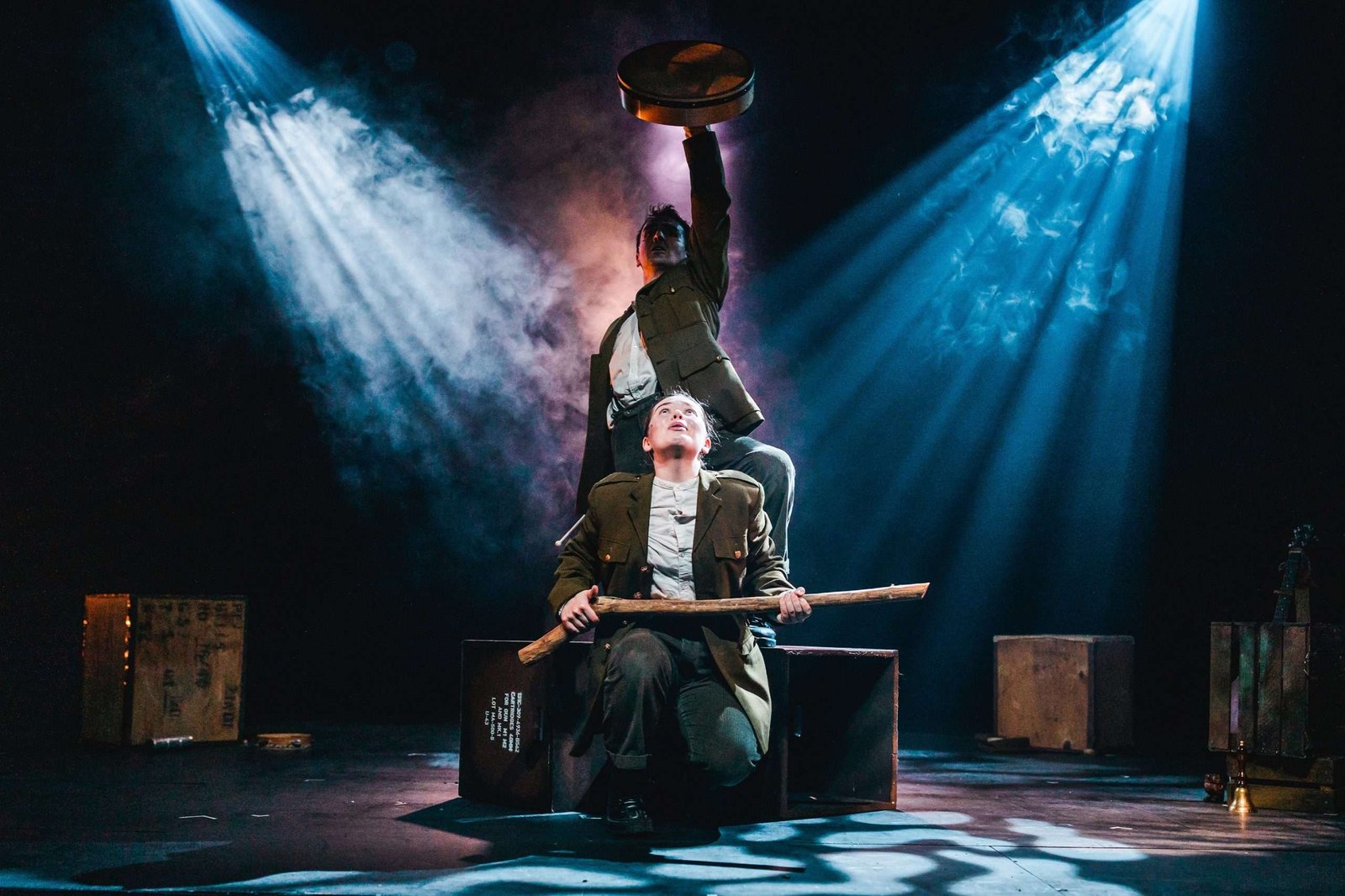 This new production by BoxLess Theatre opened as part of the Barn Theatre’s first outdoor theatre festival, BarnFest, in August 2020 and transferred to the main space of The Barn Theatre the following month, becoming one of the first major indoor productions in the UK since the COVID lockdown and garnering 4- and 5-star reviews.  It will now be part of Nimax Theatres’ plans to reopen its theatres and will be the first new production to be staged indoors in London’s West End since the Government closed theatres in March.  The limited two-week season at the Garrick Theatre will run from 7 to 22 November 2020, with a Remembrance Day Gala and Press Night in aid of the Royal British Legion and Farms for City Children (founded by Michael and Clare Morpurgo) at 7pm on Wednesday 11 November.  There will also be a special 11.01am performance on 11 November.  Audience capacity will be reduced and distanced for the two-week run.

The West End run will be preceded by four performances at Bristol Old Vic at 7.30pm on Wednesday 21 and Thursday 22 October and 2.30pm (with a BSL interpreter) and 7.30pm on Saturday 24 October.

“I’ve had nearly eighteen years of yesterdays and tomorrows, and tonight I must remember as many of them as I can. Tonight, more than any other night of my life, I want to feel alive!” PRIVATE PEACEFUL relives the life of Private Tommo Peaceful, a young First World War soldier awaiting the firing squad at dawn. During the night, he looks back at his short but joyful past growing up in the countryside: his exciting first days at school; the accident in the forest that killed his father; his adventures with Molly, the love of his life; and the battles and injustices of war that brought him to the front line.

Michael Morpurgo said of the transfer, “Private Peaceful, the play adapted for the stage by Simon Reade, has had a long and remarkable journey. From book to play to film, the story has grown in stature with each transformation.  But perhaps now has been the most remarkable moment.  With theatres shut down all over the country, The Barn Theatre in Cirencester decided to put on its first indoor show, one of the first in the country, a new co-production by BoxLess Theatre and Take Two Theatrical of Private Peaceful, taking all necessary precautions, a production that has garnered glowing reviews, and is shortly on its way to the Garrick Theatre in London.  This is our theatre at its courageous best: powerful, innovative, unforgettable. Theatre is on its way back, coming home!”

Simon Reade added, “Private Peaceful is arguably the most moving and profound of all Michael Morpurgo’s extraordinary stories. Since I first adapted it for the theatre as a one-man show in 2004, it has toured the world, been adapted into a large-cast play for schools and youth theatres, recorded for BBC Radio 4 and made into a feature film starring George Mackay and Jack O’Connell.

“And now comes this refreshing new production from BoxLess Theatre and the enterprising Barn Theatre, Cirencester, which has reinvented the original stage play, blazing a trail for audiences hungry to return to
theatre and celebrate all humanity as we live on through these dark times; it is a beacon of hope and a thing of joy for all of us.”

Private Tommo is played by Emily Costello.  Emily is the first female performer to play Tommo on the professional stage and her performance has been described by Michael Morpurgo as “extraordinary”.  This production of PRIVATE PEACEFUL is the first to have two cast members rather than being a solo piece, as it was originally written.  James Demaine will play Charlie and other roles.  It has been staged so that the two actors never touch and are socially distanced.

The production is directed by Alexander Knott, with Zöe Grain as associate director and movement director and composition by James Demaine.  Sound design is by Harry Smith and lighting design by Sam Rowcliffe-Tanner. Associate producers are Julie Clare, and Thomas Hopkins & Michael Quinn for GingerQuiff Media.

PRIVATE PEACEFUL at the Garrick Theatre will mark the West End debuts of the cast and the creative team.

Capacity at the Garrick Theatre has been reduced to comply with COVID-19 Secure guidelines for social distancing plus robust risk mitigation. In addition to hand sanitation, face coverings and track and trace, other measures will include contactless tickets, temperature testing and the deep clean and sanitation of the theatre.

*Additional 11.01am performance on Wednesday 11 November