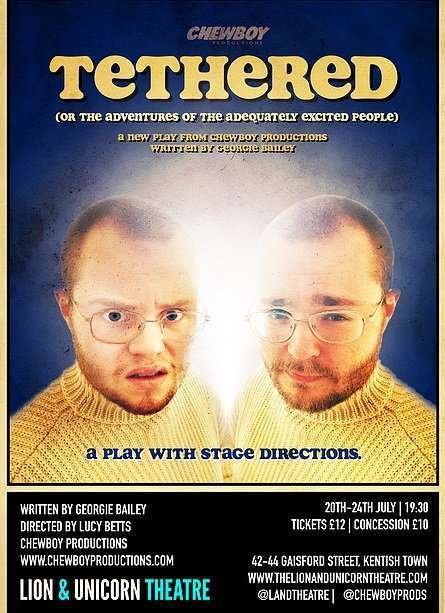 TETHERED, or, The Adventures of the Adequately Excited People.

Written by Georgie Bailey | Directed by Lucy Betts | Performed by Hal Darling & Georgie Bailey
A madcap adventure to find the meaning of theatre.

Sans and Moins are getting saved, after a lifetime of being tethered together. The prophetic printer has told them so, and they’re very excited. Adequately excited. Kind of excited. As it’s not the first time they’ve got a message like this, and the real question is, will it be the last?

TETHERED is a brand-new dark comic play from the award-winning ChewBoy Productions, dealing with hope, loss and the reliance we have on others. It explores whether we can truly understand one another, and how far we would go to keep ourselves sane when trapped in one place for too long…

This fast paced, surreal piece of new writing marks the return of the critically acclaimed ChewBoy Productions, following their Best of Brighton Fringe (2019) award-winning, five-star debut show EUAN which toured the UK at venues such as the Rose Theatre Kingston and Chichester Festival Theatre.

TETHERED reunites the creative team from EUAN, sustaining and elevating the signature bizarreness ChewBoy has become known for; ensuring a night that no one can forget no matter how hard they try. ChewBoy Productions is a multi-arts company specialising in theatre, film, digital and developing work with early-career artists. We create surrealist work which gives something to chew long after you’ve experienced it; with each project being unique in utilising the skills of creatives from varying specialities.

★★★★★
“ChewBoy Productions are a theatrical force to be reckoned with, and it will be fascinating to see their undoubted talent develop in the near future.”
The Review Chap

★★★★
“Downright bewildering, but also bloody brilliant.”
Views from the Gods

★★★★
“Brave, baffling and brilliant to boot. I wish more companies had the confidence to take this kind of risk because, as EUAN proves, it pays off.”
Broadway Baby

Tickets cost from just
From £10 per person